It is easy to blame Kohl's (KSS 2.02%) problems on COVID-19. Admittedly, government stay-at-home orders and the retailer shutting its doors to the public for a time hurt recent results. In its fiscal second quarter, which ended on Aug. 1, revenue dropped by 23% to $3.4 billion.

However, taking a closer peek at past results, Kohl's sales were sluggish before the pandemic. After all, a company doesn't announce it will lay off 15% of its corporate workforce if it faces a temporary setback. 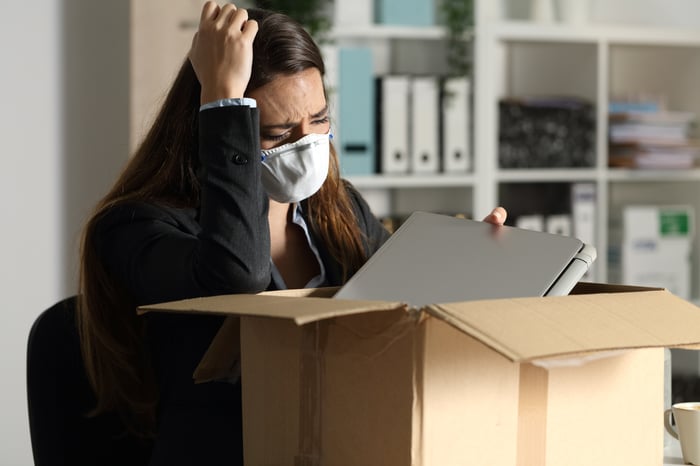 Where are the customers?

Management is trying to get people into its stores, including a well-publicized deal last year with Amazon. Under this arrangement, people can return merchandise that they've ordered from Amazon to a Kohl's store. Kohl's employees take care of packing it up, putting on a label, and sending it back to Amazon.

Last year, management claimed that the deal helped increase store traffic during the end-of-the-year holidays, but Kohl's fourth-quarter same-store sales (comps) were flat. So it's not like it brought in a ton of people who went on to spend their money there. Overall, comps were down 1.3% for the year. Management admitted that these results were disappointing.

As stores reopened, CEO Michelle Gass commented on the company's second-quarter earnings call, "We have seen traffic build and remain pleased with the overall performance of the program."

Still, there are other places to return goods ordered on Amazon. Granted, Kohl's makes it convenient, but places like Whole Foods (owned by Amazon) have lockers to accept deliveries and returns. So it's not like Kohl's has an exclusive deal.

Management is taking other steps to improve the business, including recently launching a new loyalty program that provides 5% Kohl's Cash rewards on all purchases. Since it was just rolled out this month, it is too early to make a judgment. However, the company still has to offer attractive merchandise to get people into its stores.

Despite Kohl's pursuing various turnaround initiatives, it is letting a large number of people go. While containing costs is important, taking this step indicates that management believes the retailer's prospects are less than rosy.

Last year, Kohl's employed an average of 122,000 people. Back in February, Kohl's announced it would lay off 250 people. This eliminated a management layer, which the company stated it did to speed up decision-making and communication.

It is the most recent action that raises my eyebrows, however. Blaming the impact of COVID-19, Kohl's announced it would cut corporate staff by 15%. If it believed results were going to rebound quickly, it would retain its people. As it stands, management expects the latest step to result in annual savings of $65 million, adding up to more than $100 million when including February's action.

This action, in conjunction with weak results, certainly makes me cautious about Kohl's prospects. I would hold off on purchasing the shares unless you see improved sales performance, particularly in the key fourth quarter, now that Kohl's has reopened all of its stores.