The mall is dead these days, but that's not the only reason to worry about Simon Property Group's (NYSE:SPG) ability to keep its chunky payouts coming. With tenants buckling, shoppers migrating online, and the country in a recession, it's hard to bet on brick-and-mortar retail as we look out to the future.

Simon's stock has been cut in half this year, and it's not the only thing getting marked down. The giant mall operator slashed its quarterly dividend from $2.10 to $1.30 a share this year, and even that rate may be too high. The stock's 7.4% yield may seem tempting for income investors in this current climate, but we may not have seen the last of the dividend cuts. 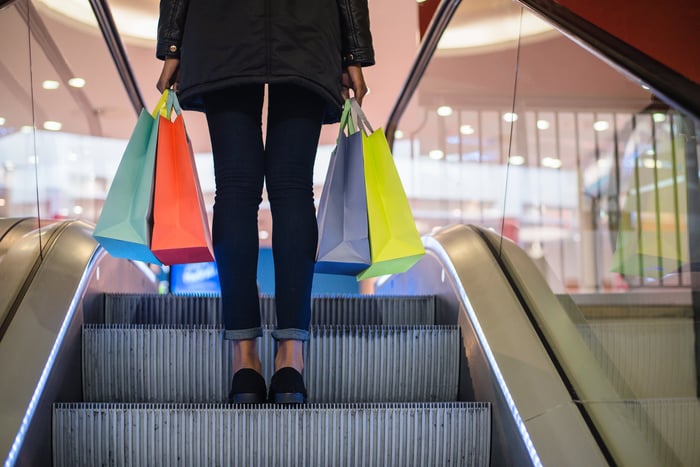 Shop until the dividend drops

Simon Property Group had a rough second quarter, and understandably so. All of its malls were shuttered in mid-March, gradually opening as the quarter itself played out. All of Simon's U.S. retail properties were open by early July, though it did have a few California locations close again in mid-July. By early August, 91% of Simon's tenants were open for business again -- but what will that mean exactly?

This year is going to be a step back for Simon. Analysts see revenue taking a 14% hit, with earnings per share plummeting 35%. One thing that bears pointing out in bringing up Wall Street pros is that they have overestimated Simon's earnings power in back-to-back quarters. Recent history tells us that the trend of quarterly disappointments will continue.

Simon points out that the occupancy rate of its malls is currently 92.9%, but it isn't just the pandemic weighing on traditional retailers. Occupancy levels have declined for six consecutive summers, sliding despite the robust economic expansion we were experiencing until the wheels came off earlier this year.

Simon knows that its glory days are in the past. Earlier this month it emerged as one of the players buying department store chain J.C. Penney out of bankruptcy. It's not a simple transaction, but it basically boils down to Simon's attempt to save one of its anchor stores from bowing out of its big-box mall spots. The problem is that J.C. Penney isn't going to spring to life just because some malls need it to survive. J.C. Penney will continue to be this fading concept with limited appeal to a largely graying audience that will inevitably either trade up to more upmarket department store concepts or trade down to more relevant mass market discounters.

The problem with having Simon align itself with its tenants -- and it has been a partner in deals for others including Brooks Brothers and Aeropostale -- is that it won't end well. Simon is throwing out lifelines, but it will only delay the inevitable. Along the way it will be seen as a conflict of interest in the eyes of the few successful mall concepts.

Bulls will argue that Simon is a buy because it's been cut in half this year. They will point out that the $2.20 a share it generated in funds from operation during the challenging second quarter is enough to not only cover its new reduced dividend but the larger previous rate, too. Investors can't live in the past. Real-world shopping isn't going to die, but it will continue to fade -- and with that Simon's prospects to avoid shrinking. We will eventually get to the point when Simon will have to reduced its payouts again, and that's why this is a dividend stock commanding a current yield of 7.4% that is too good to be true.