They're both fast-food powerhouses, but that doesn't mean one's the same as the other.

Call it a clash of the titans of the fast-food world. McDonald's (MCD 0.39%) may be the biggest and most recognizable name, but with Taco Bells, KFCs, and Pizza Huts all under its umbrella, Yum! Brands (YUM -0.94%) has three different ways to appeal to burger-fatigued consumers.

If there's only room for one in your portfolio, though, McDonald's is still it.

Credit has to be given where it's due. Against a coronavirus-riddled backdrop, Yum! Brands has done reasonably well. Sales for the quarter ending in March were off by 3% year over year, and core operating profits tumbled to the tune of 6%. But earnings were in line with expectations. The following quarter's top line -- fully impacted by COVID-19 shutdowns -- fell 12%. But again, consider the environment. Second-quarter sales and earnings still topped estimates. 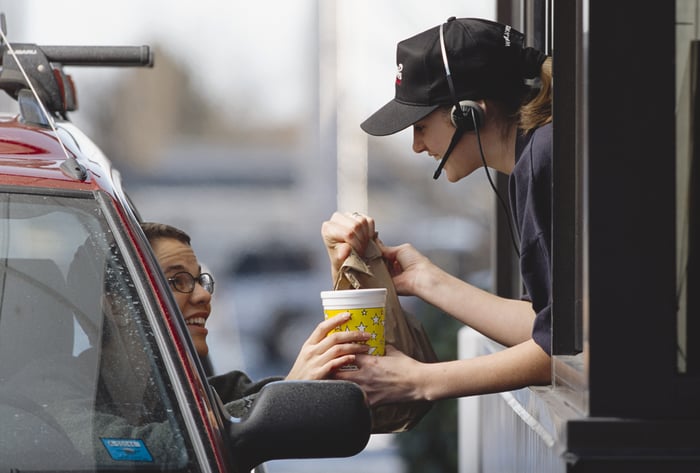 Much of that (relative) success has to do with innovations the company put in place before as well as after the pandemic took hold. In April, Yum's Taco Bell brand unveiled an at-home taco bar solution as a way to capitalize on Cinco de Mayo, and by April, Pizza Hut was able to offer contactless, curbside pickup. Digital/online sales growth of 40% is a key reason Q2's numbers weren't worse.

On balance, though, COVID-19 cracks are starting to show.

Chief among those cracks is August's bankruptcy filing from NPC International. NPC is Yum's biggest Pizza Hut franchisee, operating over 1200 of them. Only about 300 of its Pizza Huts restaurants are expected to close, of more than 18,000 worldwide. If the network's biggest and one of its most experienced quick-service operators is struggling (NPC also operates nearly 400 Wendy's (WEN -0.40%) locations), it's not a stretch to suspect other franchisees, as well as company-owned stores, are feeling a similar pinch.

Yum! Brands will survive the fallout from the COVID-19 contagion. As it stands right now, though, there are more uncertainties than certainties, with one of those uncertainties being just how long it will take the company to shrug off the effects of the pandemic. This scenario is generally not supportive of a stock's price.

That's not to suggest McDonald's isn't bumping into some coronavirus turbulence of its own. The company's second-quarter revenue fell 30% year over year, driving a 68% setback in net income. In the meantime, an embarrassing gaffe within its leadership ranks has turned into a full-blown debacle. Former CEO Steve Easterbrook stepped down in November of last year after forging a relationship with an employee that "violated company policy and demonstrated poor judgment." A more thorough investigation has since found Easterbrook may have downplayed the nature of this relationship and failed to disclose other, similarly inappropriate relationships with employees. McDonald's and Easterbrook are now locked in a legal battle, largely over the former chief's severance package. The company also faces lawsuits alleging systemic racial discrimination.

At the end of the day, though, McDonald's is pretty darn resilient.

One only has to look at the success of its most recent promotional effort to be reminded of this. Within days of launching the limited-time "Travis Scott meal," most of the company's restaurants reported shortages of the ingredients needed to make the hamburgers in question. McDonald's new spicy chicken nuggets are also earning good reviews, and the company masterfully promoted them with a humorous (and memorable) "spicesurance" gag.

In short, these efforts worked. The company's third-quarter sales aren't expected to turn positive again. But analysts are modeling top-line growth of nearly 14% next year following this year's 9.5% setback. It's all a testament to how clever the company's marketing and product-development arms are ,and how responsive the public is to these efforts despite McDonald's recently tainted image.

Other investors are betting the fast-food giant rebounds from its Q2 lull as well, leveraging its physical footprint and highly familiar name. Shares hit an all-time high this past week, even though the S&P 500 is now well below its early September record highs.

It's admittedly intimidating to step into a stock while it's at all-time highs. Even though it might feel as if you're overpaying, paying a premium for high-quality holdings generally pays for itself. Stocks that don't balk as they move into new-high territory tend to be the names most capable of continuing to do so. There's always an underlying reason for this strength.

In other words, this is an instance where you should trust what the market is telling you. Despite its recent turbulence, McDonald's strong foundation means it remains a best-of-breed pick.