The expansion will see its plant-based burgers at fast-casual restaurants, too.

Just a few weeks after it introduced Impossible Burgers to some of Canada's leading restaurants, Impossible Foods, privately held rival of Beyond Meat (BYND -1.85%), declared its plans to greatly expand availability of its products in the northern country. At that time, the plant-based meats saw their debut at several "world-class restaurants," including Joe Beef, Patois, Hog Shack Cookhouse, Gold Standard, and others.

The initial introduction, made because of "clamor" and "overwhelming demand" from Canadians, continued only while supplies lasted. The rollout beginning yesterday at 200 fast-casual restaurant locations, however, marks the start of permanent availability of Impossible Burger across Canada, according to the company press release. Impossible additionally states "all restaurants in Canada will be able to order" their simulated meat from October 2020 forward. 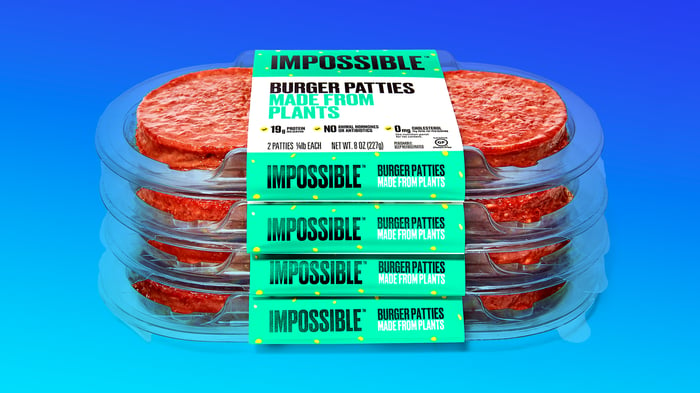 Both Canadian-owned and American-owned fast-casual chains in Canada will soon stock the Impossible Burger, including The Burger's Priest with its motto of "redeeming the burger, one at a time," Triple O's, White Spot, "cult-favorite" Cactus Club Cafe, QDOBA, Wahlburgers, and Red Robin. Distributors will stock Impossible Burgers for any restaurant or chain to order starting next month.

In its press release, Impossible Foods confidently states, "Canada is Impossible Foods' first international market outside of Asia and will soon become the company's largest market outside of the United States." The company still has an uphill race to catch up to the retail footprint of Beyond Meat, its biggest competitor. Beyond is selling its products (with their possibly more attractive soy-free, GMO-free brown rice and pea protein) in 85 countries compared to Impossible's four countries, as reported by the Los Angeles Business Journal.

Canada's annual beef consumption per capita has fallen from approximately 85.5 lbs in 1980 to an expected 58.9 lbs in 2021, Statista reports.