This is the story of an emerging healthcare company on its way to capturing a billion-dollar market opportunity.

After more than a decade of research and development, pharmaceutical company Trevena (TRVN 9.29%) has received its first drug approval from the U.S. Food and Drug Administration (FDA). That is an outstanding achievement, and it sure has attracted a lot of attention. The stock is now among the most sought-after holdings for do-it-yourself investors on Robinhood.

Investing in a business before a new drug launch can be a lucrative way to benefit from its growth potential. Today, let's look at why the company popular with Robinhood investors is actually a solid choice for all healthcare stock pickers. 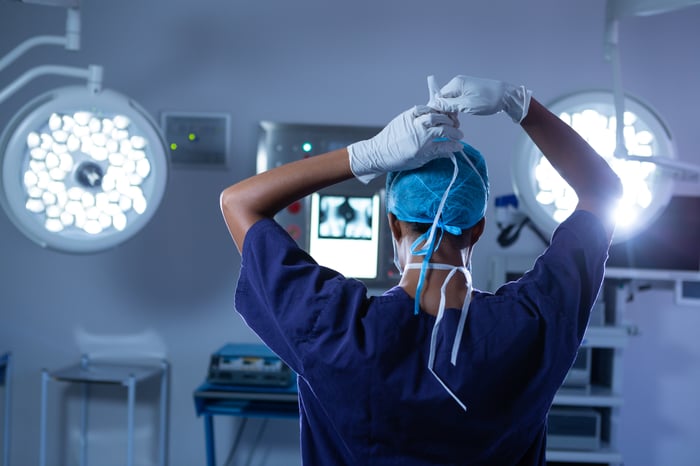 What is the company's new drug?

Trevena's new drug, Olinvyk (oliceridine), is an intravenous (IV) opioid that can provide rapid relief for moderate to severe pain in hospitals or controlled clinical settings. The drug has vast applications, including for use after a knee surgery, hernia repair, spine fusion, colon removal, or C-section. Olinvyk is the company's only commercialized product. Trevena has no other candidates in phase 2 or phase 3 clinical trials.

In clinical studies, patients who took Olinvyk experienced pain relief in as little as two to five minutes. Olinvyk's efficacy is significantly better than that of a placebo and has a similar safety profile when compared to other opioids.

The total market opportunity for Olinvyk is over $1.5 billion in the U.S. alone, consisting of 45 million hospital patients who may need opioids to relieve post-surgical pain. The product will be available sometime in the fourth quarter of 2020. In its initial launch, the company is targeting Olinvyk for use in 9 million surgical procedures in 550 hospitals and 500 ambulatory surgical centers.

While the company has a lot of growth potential, it also has its fair share of skeptics. Currently, about 9% of the company's shares outstanding are shorted.

The primary investment risk that bearish investors point to is Olinvyk's efficacy when compared to IV morphine. Although Olinvyk can decisively reduce patients' pain severity, it did not demonstrate superiority to IV morphine in phase 3 clinical studies, casting doubts on Trevena's pricing power.

Luckily, efficacy is not the only part of the equation; 75% of physicians and pharmacists believe that Olinvyk can replace IV morphine based on its superior respiratory safety and tolerability traits.

The drug can still do well in its commercial launch despite the lack of consensus on its clinical profile. The average cost of analgesia with IV morphine is between $16 to $21 per syringe. For the sake of argument, even if Trevena prices Olinvyk at $15 per dose, it can still generate over $100 million in revenue, assuming the drug's prescription volume reaches its 9 million procedure target. That's a lot of potential revenue for a company with a market cap of just $337 million.

Another often-discussed risk factor is Olinvyk's potential for commercial success in the face of America's opioid epidemic. There are now over 2.5 million people throughout the nation suffering from opioid use disorder.

Fortunately, Olinvyk can only be used in controlled healthcare settings, which should significantly decrease the likelihood of overdose or addiction associated with the product. There are also currently no alternatives to the relief of acute or chronic pain other than strong analgesics such as opiates.

For this very reason, the demand for opioids is still growing in the U.S., contrary to popular belief. In 2016, Collegium Pharmaceutical (COLL 3.15%) received FDA approval for its extended-release oxycodone tablet, Xtampza. The drug brought in $33.6 million in revenue during the second quarter of 2020, up 29% from a year earlier.

Trevena is not just for Robinhood investors

Trevena is more than ready to capitalize on this huge market opportunity. As of June 30, it has more than $108 million in cash and equivalents, which should last the company until Q4 2022. Until then, Trevena should not have to sell more stock, diluting investors' shares for the sake of commercialization expenses. The healthcare company's shares have rallied by nearly 200% year to date, far outperforming the S&P 500's meager 1% gain, and it's not too late for new investors to get in on the action.