Mastercard (NYSE:MA) declared a cash dividend of $0.40 per share for the third quarter, maintaining the same payout it has had for the previous three quarters.

The payment-processing company has an annual payout of $1.60 per share at a yield of just 0.49%. It has a payout ratio of about 24%. Mastercard has increased its dividend annually for the past nine straight years. Over the past five years it has a compound annual growth rate of roughly 24%.

The cash dividend will be paid out to shareholders on Nov. 9.

Mastercard pays out a higher dividend than its chief rival Visa, which pays out $0.30 per share per quarter. American Express pays out $0.43 per share quarterly dividend.

Mastercard is coming off a second quarter when net revenue dropped by 19% to $3.3 billion, year over year, and net income fell 31% to $1.4 billion due to reduced consumer spending caused by the COVID-19 pandemic. The company had a 10% decline in the gross-dollar volume in the quarter, while cross-border volume was down 45%, and switched transactions fell 10%. 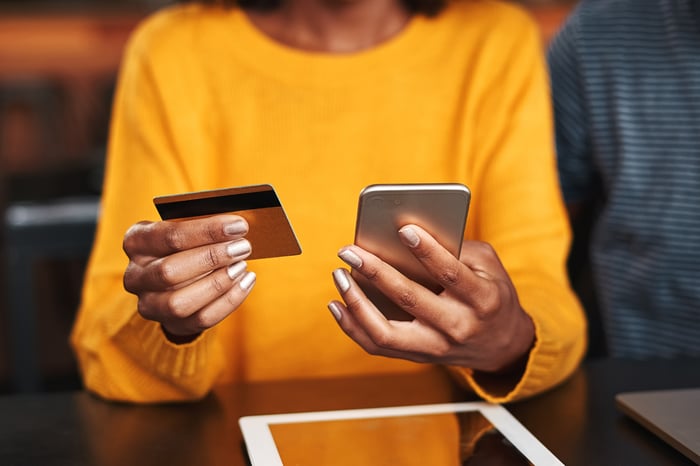 However, the credit card company reports modest improvements in its key operating metrics through August as most markets are in the "normalization phase" when social distancing and mobility limitations are relaxed, and spending begins to recover.

Switched-volume growth rates -- excluding travel and entertainment -- are back to levels they were at before the pandemic. Switched volume refers to the authorization, clearing, and settlement of a transaction, which generates fees. The company notes that there has also been improvement in travel- and entertainment-switched volume.

Cross-border volume growth, which is a transaction in which the two parties are in different countries, has also shown modest improvement.

Mastercard's stock price was trading slightly higher on Tuesday and is up about 10% year to date.