The electric-vehicle maker's CEO seemed to rein in expectations.

The stock market has been on edge, and that showed up in the way that major market benchmarks moved early Tuesday. For the Nasdaq Composite (^IXIC), the news was a little bit better than for the broader market. The Nasdaq picked up about 0.2% shortly before noon EDT, compared to losses for the Dow and S&P 500.

Helping to lead the charge for the Nasdaq in 2020 has been Tesla (TSLA 10.97%). The electric-vehicle pioneer never fails to make news, and with its Battery Day presentation imminent, investors can hardly wait to see what Tesla CEO Elon Musk has to show them. Yet as we saw a while back with a comment about Tesla's stock price, Musk once again said something that seemed designed to try to tamp down some of the euphoria surrounding the company and its shares.

Tesla's shares were down almost 6% on Tuesday morning. As investors prepare for this afternoon's Battery Day presentation, Musk tried to be realistic about what they're going to see later today.

Musk specifically pointed to the long-term nature of Tesla's work in a tweet late Monday. The technology that shareholders will see will have an important impact on Tesla's long-term production plans, according to Musk. Moreover, it will help drive the development of the Semi, Cybertruck, and Roadster vehicles. 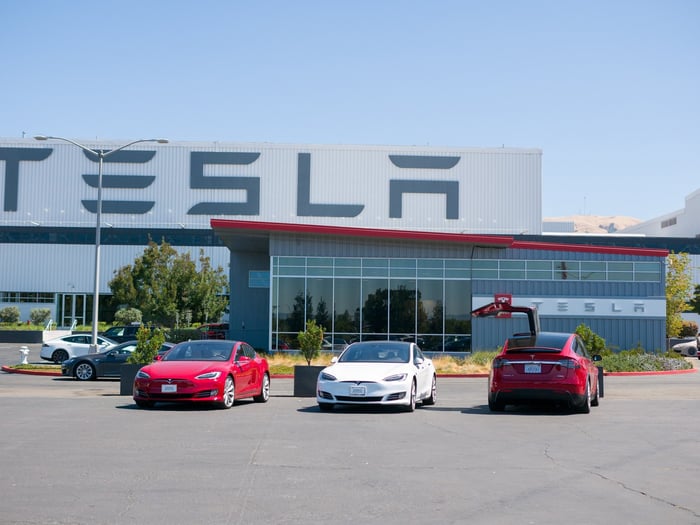 However, Musk warned that investors shouldn't anticipate immediate ramping up of its innovative new technology. Rather, the announcement will only hit what he called "serious high-volume production" levels beginning in 2022.

That seemed to take the wind out of the sails of Tesla's stock. Shares had held up well during Monday's market sell-off, helping to support the Nasdaq and the broader stock market. The decline this morning seemed to indicate some nervousness about the automaker's ability to execute on a key aspect of its business.

Musk's comments flatly admitted some of the difficulties involved in scaling up production. Tesla plans to boost the number of battery cells it purchases from third-party providers like Panasonic and LG. However, even with those suppliers operating at full capacity, Musk still believes there'll be big shortages starting in 2022. Tesla will have to act on its own accord in order to ensure a reliable supply of battery components and materials.

Tesla's CEO appealed to investors to understand the difficulty of mass-producing new technology. As Musk put it, building "the machine that makes the machine is vastly harder than the machine itself."

Even with those difficulties, Tesla appears to be doing well with its core business. Reports of a leaked email from Musk suggest that the car company could hit another record for quarterly deliveries.

Investors still want to see something encouraging from the Battery Day presentation Tuesday afternoon. Now that the automaker's stock has climbed so far so quickly, shareholders are counting not just on the success of the car business, but also on Tesla's ability to capitalize on adjacent opportunities like battery technology. If Tesla lives up to its past record, though, then Tuesday's declines might seem short-sighted in hindsight.

Tesla Falls Again, but This Nasdaq Stock Is Truly Plunging
401%