Please ensure Javascript is enabled for purposes of website accessibility
Log In Help Join The Motley Fool
Free Article Join Over 1 Million Premium Members And Get More In-Depth Stock Guidance and Research
By Howard Smith – Sep 22, 2020 at 11:25AM

The company announced yesterday that it is expanding retail distribution of one of its products.

Shares of plant-based meat maker Beyond Meat (BYND -2.44%) jumped 9% earlier this morning and remain up almost 7% as of 11 a.m. EDT. The company made an announcement yesterday that may have gotten lost by investors on a down day for the stock market.

Beyond Meat introduced its breakfast sausage products to retail stores nationwide in March 2020. Before announcing its retail rollout, Beyond Meat founder and CEO Ethan Brown said in a release, "It has seen early success at some of the most popular and iconic quick service restaurants." 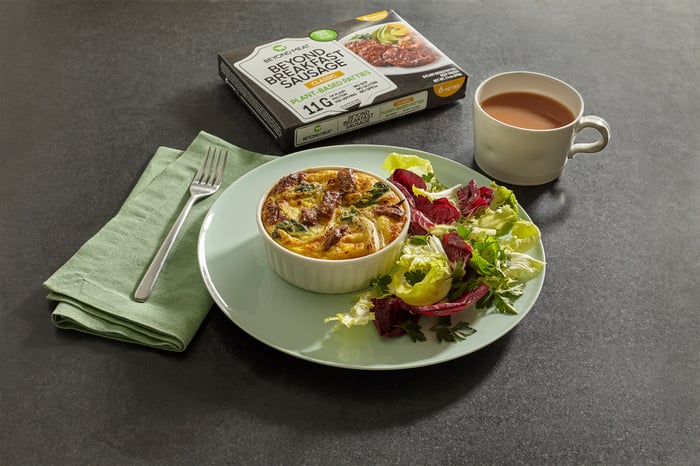 In its announcement yesterday, the company said it will more than double the retail distribution of the plant-based sausage patties.

By the end of September, the company says distribution of its Beyond Breakfast Sausage patties will be expanding to Kroger (KR -0.43%), Target (TGT 1.22%), Walmart (WMT 0.29%), and other grocery chain locations.

Citing natural products retailer data company, SPINS, Beyond Meat said that popularity of frozen plant-based breakfast meat is accelerating, and that Beyond Meat was the top-selling brand in all refrigerated plant-based meat for the latest data period, ending in August.

Investors today seem to be focusing more on the product expansion and giving the share price a boost it didn't see yesterday on the news.

These 3 Growth Stocks Are at Historic Lows, But Could Be About to Rally
356%