Please ensure Javascript is enabled for purposes of website accessibility
Log In Help Join The Motley Fool
Free Article Join Over 1 Million Premium Members And Get More In-Depth Stock Guidance and Research
By Daniel B. Kline - Updated Mar 11, 2020 at 12:28PM

The plant-based meat company wants to extend its reach into the morning.

Beyond Meat (BYND -4.43%) has been instrumental in changing how people view non-animal meat products. The company's plant-based burgers generally look, taste, and cook like the beef products they are meant to substitute for.

Now, the company is extending its pork-substitutes line with the addition of breakfast sausages: They will hit retail store shelves nationwide by the end of March, in both classic and spicy flavors. 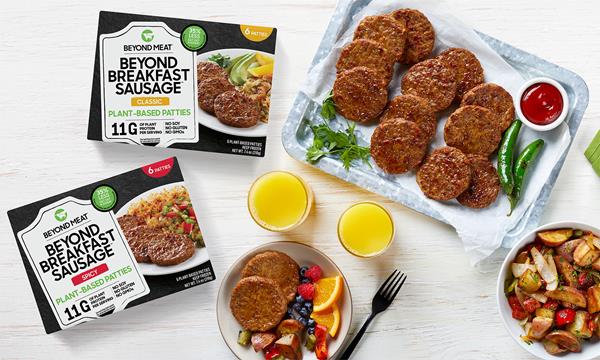 Beyond Meat is rolling out breakfast sausage nationwide. Image source: Beyond Meat.

What is Beyond Meat doing?

The plant-based meat company is looking to win market share in another daypart. It has lunch and dinner covered with its burger patties, ground meat, and brats -- now it's trying to offer people a vegetarian choice for their morning meal.

"Our Beyond Breakfast Sausage platform delivers on our promise of enabling consumers to Eat What You Love while advancing health, environmental and animal welfare benefits," said CEO Ethan Brown in a press release.

The company has been testing the sausage product with a number of its restaurant partners. It has "50% less total fat, 35% less saturated fat and sodium and no cholesterol compared to a leading brand of pork sausage," added Brown, though he did not say which brand it was being compared to.

Beyond has built a level of credibility in the marketplace. The consumers who patronize it seem to genuinely like its products, and there's every reason to believe that its core audience will try the new plant-based sausage offerings too.