Ask most people about Moderna (NASDAQ:MRNA) and you're likely to get one of two responses. Many individuals won't recognize the company's name at all. Of those that do, they'll probably mention that Moderna is one of the leaders in the race to develop a COVID-19 vaccine.

That's definitely Moderna's greatest claim to fame right now. There are only four coronavirus vaccines in late-stage testing in the U.S. right now (including AstraZeneca's paused study). Moderna's mRNA-1273 is one of them.

Investors' excitement about the potential for mRNA-1273 is the main reason behind the biotech stock soaring close to 250% so far this year. But there's a bigger story about Moderna that you might be missing. And it's one that could mean that the company's gains in 2020 are merely a drop in the bucket of what's to come. 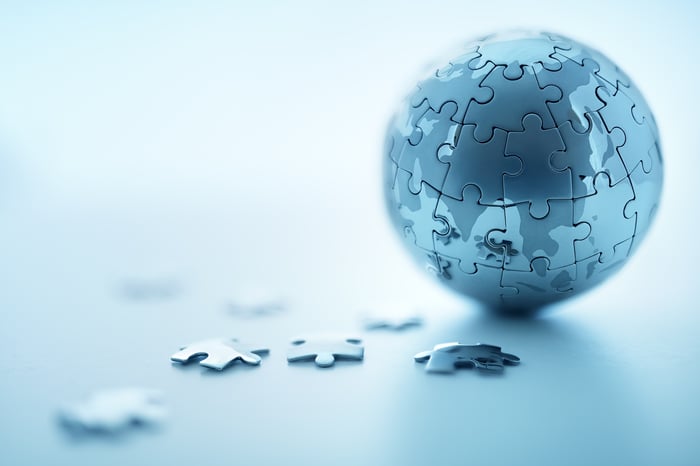 The power of a platform

Don't focus only on Moderna's COVID-19 vaccine candidate. Look at the underlying technology platform that the vaccine represents.

You probably recall from biology classes you took years ago that DNA contains the blueprint for life. To be more specific, DNA has the detailed instructions needed for producing proteins, which are the building blocks of life. But DNA needs help relaying those instructions to the ribosomes, the body's mini-factories that actually make proteins.

That's where messenger RNA (mRNA) comes into play. mRNA carries the instructions from DNA to the ribosomes. Your body won't make a single protein without mRNA fulfilling its role.

From the beginning, Moderna's goal was to harness the power of messenger RNA. The company knew that proteins were critical in fighting and preventing disease. If it could engineer mRNA to contain the exact sequence for a desired protein, Moderna figured that it could create a new category of medicines that target a wide range of diseases.

The company's mRNA platform could make that goal possible. Moderna developed processes to "hack the software" of mRNA. It created ways to insert mRNA into targeted tissue and cells without the body's immune system attacking the foreign molecule. The biotech learned how to ensure that ribosomes viewed the engineered mRNA as being produced naturally.

Moderna's take is that if mRNA works for one disease, it should work for lots of diseases. If the company is right, its mRNA platform could be a game-changer in healthcare.

mRNA-1273 is Moderna's most advanced pipeline candidate. With mRNA-1273, Moderna engineered mRNA to prompt the body's ribosomes to create a protein exactly like the spike protein on the surface of the novel coronavirus that causes COVID-19. The body's immune system then marshalls a response to fight this protein, which prepares it to prevent infection by the real coronavirus later.

But Moderna's mRNA platform isn't limited to developing vaccines to prevent viral infection. The biotech is working with Merck to develop cancer vaccines. With these vaccines, mRNA is inserted into the body to prompt the creation of proteins most likely to trigger the immune system to attack a specific type of cancer.

Moderna teamed up with AstraZeneca to develop an mRNA therapy that causes the production of a protein known as vascular endothelial growth factor-A (VEGF-A). The production of the VEGF-A protein could spur the body to create more blood vessels and potentially serve as a regenerative treatment for patients with cardiovascular diseases.

mRNA also could be promising in fighting genetic diseases. Moderna recently partnered with Vertex Pharmaceuticals to use an mRNA approach to treat cystic fibrosis, a rare genetic disease caused by defective CFTR proteins. The companies hope to use engineered mRNA to trigger the production of functional CFTR proteins.

The most important thing for investors to recognize is that Moderna's COVID-19 vaccine could be just the tip of the iceberg. If mRNA-1273 is successful, it will go a long way toward validating the company's mRNA approach. Moderna could develop vaccines targeting any kind of virus if mRNA-1273 works.

Vaccines are likely the best way to use mRNA since they don't require many doses. The delivery vehicles for mRNA into the body can cause severe side effects, especially if patients have to receive a lot of doses over time.

But don't discount the possibility that Moderna could figure out ways to overcome those challenges. If it does, the mRNA approach used for one disease could be used to treat hundreds and even thousands of diseases. And a lot more people will almost certainly know who Moderna is then.