Please ensure Javascript is enabled for purposes of website accessibility
Log In Help Join The Motley Fool
Free Article Join Over 1 Million Premium Members And Get More In-Depth Stock Guidance and Research
By Chris Neiger – Sep 28, 2020 at 8:00AM

Slow and steady wins the race.

Lately, it appears some investors don't know what to do with Apple (AAPL -1.70%). The stock skyrocketed following the market's steep drop in March, but then began losing steam at the beginning of September as tech stocks retreated.

Even with this volatility over the past few weeks, the stock is still up 53% year to date. But investors who are buying Apple stock right now, or are trying to figure out what they should do with their current shares, may be wondering where Apple is headed over the next year. Let's take a closer look at what may be around the corner for the company. 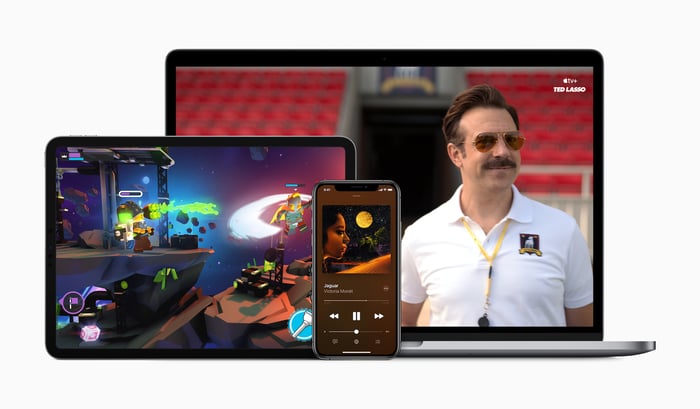 New products in the pipeline

Some investors may have been disappointed that the latest iPhone didn't debut at Apple's September event, but fear not. The company will likely debut its next iPhone, probably with 5G capabilities, before the end of the year.

New iPhones aren't as critical as they used to be to Apple's future, but the new device will still be important as 5G cellular connectivity is just starting to gain steam, which could spur an upgrade cycle for millions of iPhone owners who've been sitting on the sidelines, waiting for 5G to arrive. Research from Strategy Analytics says that Apple could be the 5G smartphone leader, surpassing Samsung and Huawei, once it releases the new device, despite Apple's competitors releasing 5G smartphones more than a year ago.

Apple also just released the new Series 6 Apple Watch with new features such as a blood oxygen sensor that will help the company keep its lead in the smartwatch market. Apple consistently outpaces its competitors in the wearables market, and its latest Apple Watch updates should easily help the company retain that position over the next year and beyond.

One thing that investors should continue to keep a close eye on is the expansion of Apple's services. The company revealed its new Apple One services bundle at its September event, and it's a big step toward Apple becoming an even bigger services powerhouse.

The basic Apple One service starts at just $14.95 per month and includes subscriptions to Apple Music, Apple TV+, Apple Arcade, and iCloud. A family plan is available for $5 more per month, and there's also the top-tier subscription that adds Apple News+ as well as the company's new fitness app subscription Apple Fitness+ and additional cloud storage -- all for $29.95 per month.

The Apple One services bundle was a significant announcement, because the company's services revenue has been growing fast, and the bundle could help accelerate its momentum. Earlier this year, Apple achieved its three-year goal of doubling its services revenue. Now, with Apple One, the company is making its offerings even more attractive in a sleek package, and Apple One could end up being a major driver of future growth for this segment.

Apple is a massive company, and it's going to move slower than smaller, high-growth businesses. But for investors looking for a stock with serious competitive advantages, Apple still looks like a solid long-term bet.