During fiscal Q2, ending on Aug. 31, BlackBerry grew its revenue by 6% to $259 million. The licensing business fueled that growth with $108 million of revenue, up 42% year over year. In contrast, the software and services segment declined 10% from the prior-year period to $151 million.

Granted, the challenging situation in the automotive industry due to the coronavirus had a negative effect on the company's connected embedded systems solution, QNX. But BlackBerry is also facing difficulties with the endpoint security specialist Cylance, which it acquired for $1.4 billion in cash in February 2019. During the earnings call that followed the acquisition, CEO John Chen had highlighted: "This acquisition will be a key investment to accelerate BlackBerry's future software and services growth."

Indeed, Cylance's solution looks promising. It leverages artificial intelligence to protect endpoints (computers and laptops), which differentiates it from legacy signature-based products such as McAfee's. As a result, management had forecast Cylance to grow in the range of 25% to 30% in fiscal 2020 (ending on Feb. 28).

It turns out Cylance revenue was "slightly up" in fiscal 2020, and "rather flattish" during the last quarter, according to John Chen.

Not only did that performance fail to match the company's previous estimates, but it also contrasted with the phenomenal growth some competitors have recently reported.

For instance, the endpoint outfit CrowdStrike (CRWD -0.06%) grew revenue by 84% to $199 million during the last quarter because of the weakness of legacy signature-based competitors and the surge in demand for securing remote employees' endpoints.

Cylance didn't profit from those same tailwinds it was exposed to, and management didn't discuss the reasons for that underwhelming performance. The truth is that CrowdStrike may have developed a competitive advantage with its easy-to-use cloud-native platform.

During the earnings call, John Chen expressed optimism, as the company will propose a cloud offering for its endpoint solution by the beginning of next calendar year or before. Indeed, that will help Cylance catch up against cloud-native competitors. But that would remain too little too late, as those competitors aren't standing still.

For example, CrowdStrike partnered this year with other cloud providers to offer integrated security solutions, and last week it announced the acquisition of Preempt Security to further enhance its platform with extra security capabilities.

In addition, as CrowdStrike is gaining scale, its research and development spending is about to exceed BlackBerry's, which could further increase its competitive advantage with a superior and differentiating offering. 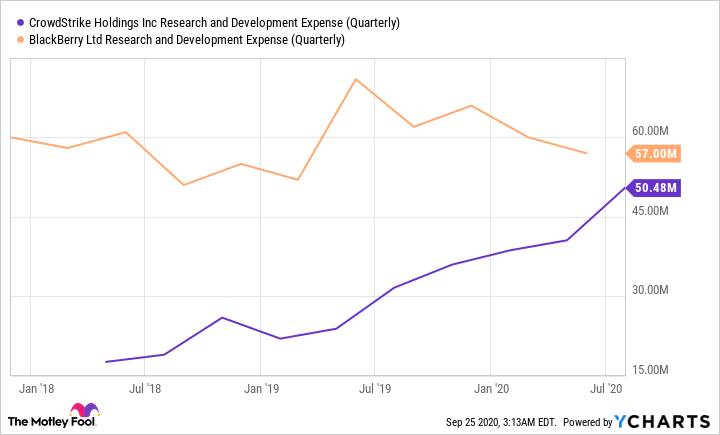 Thus, given the intensifying competition to secure endpoints, investors should not get too optimistic about Cylance's potential to boost BlackBerry's top-line growth.

Management didn't change its full-year revenue estimate of $950 million, which suggests the better-than-expected global performance in Q2 was due to a one-time boost in the licensing business.

However, you should take into account that BlackBerry is still struggling to grow its revenue (last-year revenue was $1.04 billion) while profits have yet to materialize. During the last quarter, the company's losses reached $23 million under generally accepted accounting principles (GAAP), compared to $44 million in losses the year before.

Looking forward, given Cylance's weakness, BlackBerry must deliver strong results with its Internet of Things (IoT) businesses, which include QNX and other solutions, to fuel its growth. That will require flawless execution, and given Cylance's disappointing performance, I'm not willing to take that bet.