One of these big pharma stocks appears to have an advantage.

Have all of the stocks of drugmakers in the coronavirus vaccine race delivered solid gains so far this year? Nope. GlaxoSmithKline's (GSK -0.76%) adjuvant is being used in three clinical-stage COVID-19 vaccine candidates, but its shares have plunged 20% year to date. Pfizer (PFE 3.06%) is arguably the clear leader in the race, but its shares are down around 7%. 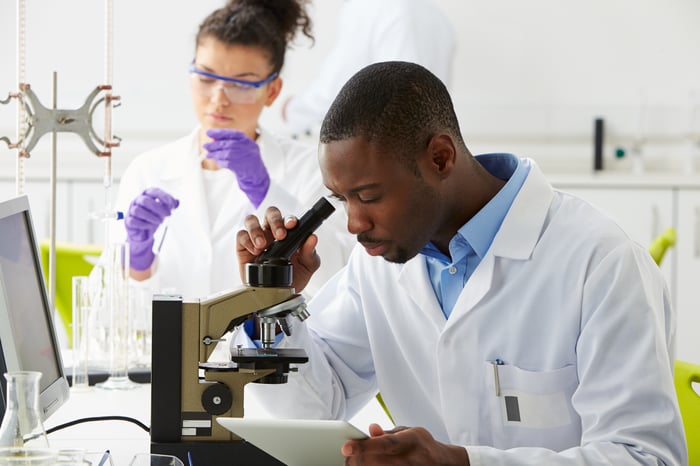 Slipping sales for older drugs are weighing on both GlaxoSmithKline and Pfizer. That won't be a major problem for Pfizer in the near future, though: The company's merger of its Upjohn unit with Mylan should close later this year.

Pfizer's blood-thinning drug Eliquis doesn't appear to be losing any steam. Its oncology franchise includes fast-rising stars such as Inlyta, Braftovi, and Mektovi, as well as blockbusters with rising sales -- Ibrance and Xtandi. The company also now has a big success with rare-disease drug Vyndaqel.

GSK and Pfizer remain major players in the global vaccines market as well. Although both companies experienced sales declines in the second quarter due to the COVID-19 pandemic, this should be only a temporary issue. GSK's best-selling vaccine is shingles vaccine Shingrix, but it also markets successful influenza, meningitis, and pediatric vaccines. Pfizer's biggest vaccine by far is its pneumococcal inoculation Prevnar 13.

COVID-19 vaccine candidate BNT162b2, which Pfizer is developing with partner BioNTech, has understandably been at the center of investors' attention. The two companies hope to report preliminary data from the late-stage study of the experimental vaccine in October.

Pfizer's late-stage pipeline is loaded with other potential winners. Pneumococcal vaccine candidate PF-06482077 is one of them. So is pain drug tanezumab. Pfizer also is hoping to win key additional approved indications for several of its existing products, including cancer drugs Bavencio, Ibrance, and Lorbrena.

GlaxoSmithKline offers a really juicy dividend yield of 5%. Its payout ratio of around 60% also appears to be solid. However, the company's dividend payout has declined in recent years.

Pfizer's dividend yield of close to 4.2% is also attractive. The drugmaker's payout ratio of 58.5% is a little lower than GSK's. In addition, Pfizer has increased its dividend consistently over the last decade.

Both of these big pharma stocks claim valuations that are lower than many other stocks on the market. GlaxoSmithKline's shares currently trade at 12.7 times expected earnings. Pfizer's forward earnings multiple is even lower at 11.6.

My view is that Pfizer is the better pick over GlaxoSmithKline. While both companies have challenges with some underperforming products, Pfizer is poised to boost its growth soon with the Upjohn-Mylan deal. I also think that Pfizer and BioNTech will be big winners in the COVID-19 vaccine market.

Pfizer isn't likely to deliver mouthwatering growth, but it does have solid growth prospects over the long run. With its great dividend, Pfizer looks like an attractive stock especially well-suited for income-seeking investors.