The first company to consolidate this highly fragmented market is going to win big.

A lot of investors wish they'd bought into Carvana (CVNA -0.74%) stock earlier this year -- shares are up an incredible eight-fold since March. Given that huge rally, it's easy for investors to assume they missed the boat on this online retailer of used cars.

But making that assumption is a mistake, and despite the year-to-date gains, you may regret not buying the stock today. 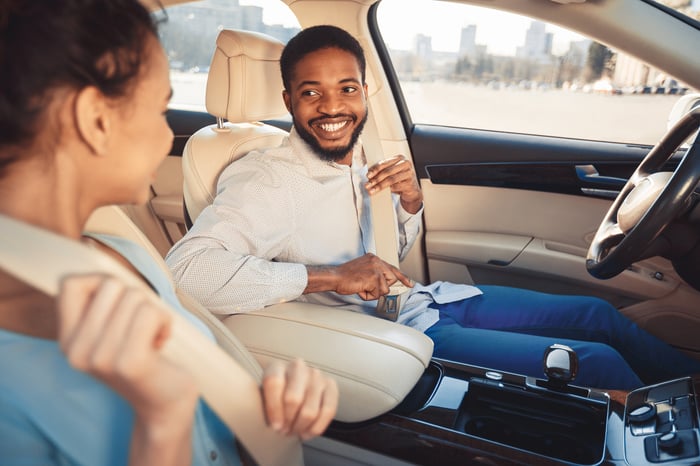 Carvana isn't just another car dealership. Instead of spending heavily to open a new dealership in just one market like traditional car sellers do, Carvana doesn't have physical dealerships. Instead, it has a pooled national vehicle inventory, regional inspection and reconditioning centers (IRCs) where it brings the cars it buys and prepares them for sale, and a national vehicle delivery network.

The pooled national inventory means that any of the company's 22,000 used cars are available to any customer in the company's delivery area, which now covers 261 markets and 73% of the U.S. population. That means Carvana's selection can't be matched by traditional dealers, which typically carry a few hundred cars (or fewer) per location. And the easy online shopping process and delivery straight to customers' driveways have earned it an extremely high Net Promoter Score (NPS) of 82 out of 100. NPS measures how likely customers are to recommend the experience to others.

From a cost standpoint, Carvana's differentiated model means it has lower variable costs to sell the next car. The company simply has to process and deliver more cars through its existing infrastructure. In contrast, traditional dealers would need to open more dealerships to sell a lot more cars. Lower variable costs mean Carvana can generally sell cars for lower prices than the competition.

The number of used car transactions in the U.S. was about 40 million last year, totaling over $700 billion in sales. That's the largest single retail category in the U.S., which means the company has the potential to grow enormously over the long term if it can continue to expand its reach.

And the need for cars isn't going away. Even a distant future with autonomous vehicles is unlikely to meaningfully alter car ownership, though vehicle owners may be busy working or watching TV while on the road.

The used car market is highly fragmented, because economies of scale have always been elusive. As a result, the No. 1 used car retailer, CarMax, had about 2% market share nationally as of 2018. And the top 100 used car dealers combined enjoyed less than 9% market share. No one has been able to consolidate the industry as the traditional business model has required opening expensive and undifferentiated dealerships to grow.

Carvana has a legitimate shot at being the first to consolidate the market due to the way it has streamlined its operation. The company grew revenue from $41.7 million in 2014 to $3.94 billion last year, , and it's not hard to imagine the company being the first used car retailer to sell millions of cars annually.

While there is still an enormous growth opportunity left within the U.S. used car market, the company's growing scale and brand awareness could allow it to expand into other related categories. The company can eventually pivot its business to also sell new cars, motorcycles, boats, ATVs, recreational vehicles, and other large personal transportation vehicles. It is fast closing in on having the infrastructure to serve the entire country, making the transition to these other vehicles a small jump rather than a huge leap for its network.

5. Still in the early stages of its growth story

Carvana stock may look expensive based on traditional valuation metrics -- shares trade at nine times trailing 12-month revenue with no profits to report on the bottom line -- but it should command a premium given its enormous growth runway. The company sold 204,308 cars in the last year, and at its current pace, it could break the one-million mark in less than a decade.

What's more, the ease of buying cars from the company (and selling cars to it) has the potential to significantly increase the number of used car transactions long term. While management noted that the traditional process for buying a used car often leaves consumers dissatisfied, they may change cars more often if it's as easy as letting Carvana pick up the old vehicle while dropping off a new one directly in their driveway.

The company with the better mousetrap that captures a growing market share tends to perform incredibly well over time. Investors shouldn't underestimate the potential Carvana has to upend this nearly $1 trillion industry and to continue outperforming the market in the process.