Please ensure Javascript is enabled for purposes of website accessibility
Log In Help Join The Motley Fool
Free Article Join Over 1 Million Premium Members And Get More In-Depth Stock Guidance and Research
By Matthew Frankel, CFP® – Oct 2, 2020 at 7:07AM

There's no way to know when the pandemic will end, but has this REIT seen the worst of its effects?

Many real estate investment trusts (REITs) that focus on net-leased single-tenant properties have held up quite well during the COVID-19 pandemic, but STORE Capital (STOR -0.05%) was hit harder than most. With a relatively high concentration of non-essential and crowd-focused businesses occupying its portfolio, STORE's rent-collection rate plunged as the coronavirus outbreak spread.

While the pandemic is still going on, there are some reasons to believe the worst could be over for STORE Capital. Here's a rundown of how badly STORE Capital's business was impacted, the recent numbers investors need to know, and what to keep an eye on. 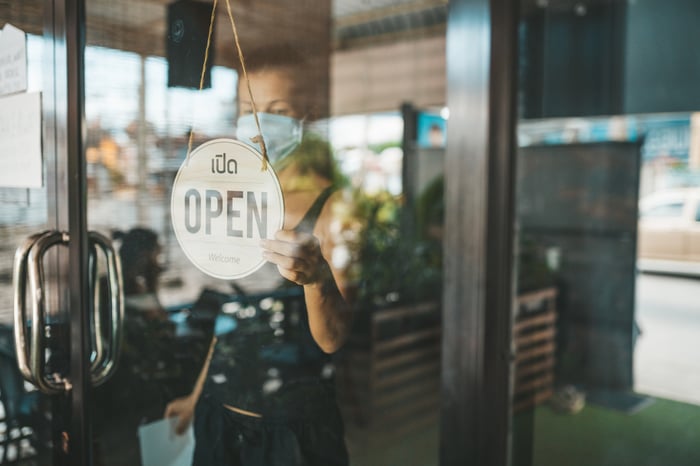 STORE Capital was hard hit by the pandemic

Net-lease REITs are generally built to withstand adverse economic conditions, but the COVID-19 pandemic hit STORE Capital rather hard. The majority of STORE's tenants operate businesses that remained open throughout the pandemic.

About 17% of rental income comes from manufacturing businesses, such as metal fabrication and food processing. Other major tenant types include auto repair businesses, lumber retailers, farm-supply stores, and car dealerships, just to name a few. These were largely considered "essential" businesses in most parts of the U.S.

On the other hand, about one-third of STORE's rental revenue comes from industries that were severely affected by the pandemic. This includes restaurants, day care centers, family entertainment hubs, movie theaters, and health clubs. In April, about 35% of STORE's properties were closed, most of which were in these five industries. And many of the company's tenants found themselves unable (or unwilling) to pay rent during the shutdowns.

As a result, STORE's rent collection plunged, reaching a level below 70% in May. And the stock price took a beating. STORE's share price plunged by about 60% in March as the outbreak spread, and even after the rebound in recent months, STORE Capital is still about 24% lower than where it started 2020.

It appears the worst is over

Looking at the recent numbers released by STORE, it appears that the worst is indeed in the past, at least from a financial perspective. Rent collection rebounded sharply as tenants were gradually allowed to reopen, and STORE recently reported that it had collected 88% of September rent after receiving 87% of both July and August billed rents. This is a sharp increase from the overall 73% rent-collection rate in the second quarter.

What's more, virtually all of STORE's tenants are now open for business, including most of its movie theaters. Ninety-eight percent of STORE's properties were open in September, up from 93% in August, and just a few movie theaters and family entertainment centers remain closed.

It's also worth noting that much of the uncollected rent is deferred, meaning that STORE Capital will get paid eventually. While the eventual rent-collection rate isn't going to be 100%, it will be significantly higher than the numbers currently imply.

It's important to keep in mind that the COVID-19 pandemic is still going on, and there's no way to know the full economic effects at this point. For example, if elevated unemployment lasts for longer than expected, it could cause a prolonged revenue decline for many of STORE's tenants.

Movie theaters are another area to watch closely. While STORE's movie theaters are largely reopened, that doesn't mean many people are actually going to see films. Movie studios continue to push the releases of the most anticipated films well into 2021, and theater operators like AMC Entertainment -- STORE's seventh-largest tenant -- aren't exactly on the best financial footing.

Another thing that could make things significantly better or worse for STORE and its tenants is the outcome of the ongoing stimulus negotiations. A new comprehensive stimulus package, with aid for businesses, could help keep occupancy and rent collection high, but the lack of an agreement could have the opposite effect.

The bottom line is that the worst appears to be over for STORE Capital -- for now. But the pandemic remains a fluid situation, and the company isn't completely out of trouble just yet.