Please ensure Javascript is enabled for purposes of website accessibility
Log In Help Join The Motley Fool
Free Article Join Over 1 Million Premium Members And Get More In-Depth Stock Guidance and Research
By Adam Levine-Weinberg – Oct 8, 2020 at 8:23AM

One of the largest long-haul budget airlines is on the verge of insolvency, threatening the future of one of Airbus' two wide-body jet families.

The combination of growing international travel demand, cheap oil, and easy access to capital drove a boom in long-haul budget airlines during the past decade. AirAsia X was one of the biggest, flying mostly to destinations around Asia from airports in Southeast Asia.

However, these long-haul, low-cost carriers have struggled to make money. Many have folded or required radical debt restructuring in recent years. The COVID-19 pandemic is finishing off those that remain. AirAsia X is now demanding that creditors take huge losses to avoid an outright liquidation. No matter how these restructuring talks play out, it will be bad for Airbus (EADSY -1.52%) and its A330neo family of wide-body jets -- and may provide opportunities for bargain-seeking airlines like Delta Air Lines (DAL 0.33%).

AirAsia X is the medium- and long-haul affiliate of AirAsia, one of the biggest ultra-low-cost carriers in the world. In recent years, management has had ambitious growth plans for AirAsia X, hoping to tap into a growing appetite for international travel among Southeast Asia's rising middle class.

However, AirAsia X has been consistently unprofitable for years. Even when oil prices crashed in 2015 -- leading to bumper profits for many airlines -- AirAsia X couldn't turn a profit. The combination of rapid growth and operating losses meant that the company racked up huge amounts of debt.

In 2020, the COVID-19 pandemic has absolutely decimated its business. AirAsia X has almost fully grounded its fleet and is planning for a very gradual recovery in capacity during 2021. The company is proposing a restructuring that would wipe out over $15 billion of debt, giving unsecured creditors less than a penny on the dollar. 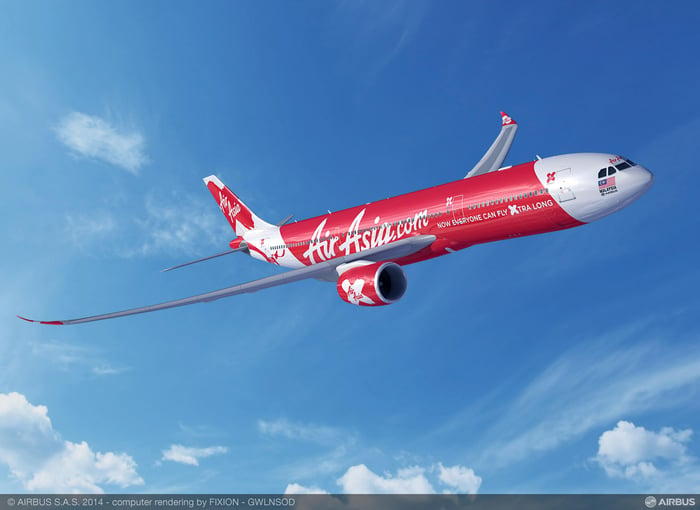 Given how AirAsia X has squandered shareholders' and creditors' capital, it's not clear why creditors would give it a second chance. But even if they do, the airline has signaled that it will retrench to its strongest markets, reducing its need for new planes -- and especially for wide-body jets like the A330neo.

A shaky order book gets shakier

AirAsia X is the top customer for Airbus' A330neo. It has 78 A330-900neo jets on order, representing 27% of the type's current backlog of 285 firm orders. AirAsia X also has outstanding orders for 30 A321XLRs and 10 A350-900s, despite the fact that its current fleet consists of about three dozen planes.

Clearly, the budget carrier has far too many orders, especially for the A330neo. It already deferred its A330neo deliveries earlier this year, forcing Airbus to slow production of the A330 family to a rate of just two per month.

Unfortunately, heavy exposure to AirAsia X is just one of many weaknesses in the A330neo order book. Iran Air is the third-biggest A330neo customer, with 28 on order, but those deliveries are on hold indefinitely for geopolitical reasons. The order book also includes 48 orders from leasing companies and 46 orders from undisclosed buyers who may not be committed to taking those aircraft. All in all, half or more of Airbus' A330neo backlog could melt away or be deferred indefinitely. That will keep the A330neo production rate -- and the profitability of the program -- under pressure.

An opportunity for Delta?

Airbus will be eager to rebuild the A330neo backlog over the next year or two. However, few airlines will have the need and financial wherewithal to order additional wide-body jets in the near term. Furthermore, many airlines are looking to eke out cost savings by simplifying their fleets. That's a problem for Airbus because the A330neo doesn't have many big-name customers.

That may provide an opening for Delta Air Lines, the most prominent A330neo operator. Delta has ordered 35 A330-900neos, of which it has seven following two deliveries late last month. Furthermore, Delta recently announced that it will retire all of its Boeing 767-300ERs by the end of 2025. It had 56 of the type entering 2020.

Delta has been planning to make the A330neo the main replacement for its 767s. It will need more than the 28 it has on order to fully replace the 767-300ER fleet over the next five years. Including growth opportunities and the eventual replacement of other aging wide-body jets, Delta will likely need at least 50 or 60 jets in the A330neo's size range over the next decade, above and beyond what it has already ordered.

The airline may address that need by buying up cheap used aircraft. However, Airbus may be willing to offer extremely generous terms for Delta to order additional A330neos. If the two sides can strike a deal, it could solidify the A330neo's market position while providing long-term cost savings for Delta Air Lines.