Believe it or not, there are investment lessons to be learned from the hit show.

The Office is one of the most popular shows ever to air on television. Years after its final season, the show is one of the most popular on Netflix. For investors starting out, it can be fun to look at shows such as The Office to learn some lessons on investment. Here are five points that you can learn from the show. Be warned, spoilers are present.

Michael Scott. We love him and sometimes cringe at him. Actually, we cringe a lot at some of his antics.

While incredibly entertaining, he's a prime example that a job title does not make someone a reliable source of information. When looking for information on an investment or business decision, don't take someone's word just because they're the CEO of whatever. Question their logic, and do your own homework. Read the company's financial results, and make informed decisions. 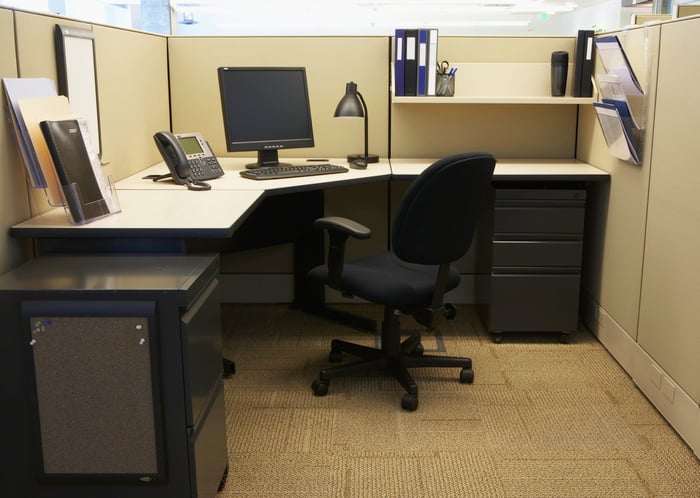 2. Debts can come back to haunt you

In perhaps one of the more skin-crawling episodes, "Scott's Tots", it is revealed that Michael Scott promised a class of students many years ago that he would pay for their college tuition. In return, he enjoyed the fame of getting his name in the paper with the class. Many years later, when the class is graduating, Michael faces the utterly painful moment of informing them he can't pay.

Might sound like a jump to compare this to borrowing money to invest, but hey, we're talking about "The Office". One of the worst things you can do is leverage to buy stocks. It creates an unhealthy pressure to create gains to cover the interest, when in fact it might be better to wait to buy. It really hinders your ability to take any risk as well, as any downside can have serious consequences.

The key to everything is knowing where things are heading. Dunder Mifflin, the paper company that the characters work for (why am I telling you this? You already knew), was in a struggling industry as pricing pressure and digitalization put pressure on their market. The company eventually goes bankrupt before being acquired.

Knowing where the future is heading, or understanding the trends of the industries you're looking at can be key to successful long-term investing. Being heavily invested in a weakening industry, and not adapting to the change, can be disastrous.

After Dunder Mifflin is taken over by Sabre, Jo Bennett puts Dwight in charge of the Scranton branch. It proves to be an error, as Dwight's typical ways lead him to firing off a revolver in the office. Once the truth comes out about the incident, Jo promptly removes Dwight as manager, even though she likes him.

It's the same with investment. You have to know when an investment is not worth it. It's a cold and calculated decision. If Wendy's isn't doing well, you can't buy the stock because you like the cheeseburgers.

Rickie Gervais was responsible for the original British version of The Office. It was a hit there, and he saw the potential of the concept for the United States market and served as an executive producer for the show. Through his rights, Gervais has collected millions in royalties. He has said that the show has by far been his biggest payday.

Finding stocks at fair prices, that offer strong yields, is the key to passive income. When you factor in the beauty of compound interest, that investment can continue to pay off for years to come.