Sometimes, buying proven reliability is better than betting on potential.

If you could only buy one stock, would you buy a dependable Dividend Aristocrat with limited upside, or would you rather bet on a turnaround play with a much lower dividend yield?

If you just got lost in this investing jargon, don't worry -- we'll define some terms in a moment. But that's the question investors should ask when deciding between investing in fast-food giant McDonald's (MCD -1.56%) versus pizza chain Papa John's International (PZZA -2.41%).

The turnaround underway at Papa John's is real, and that's good news for shareholders. But I'd pick the reliable dividend of McDonald's if forced to choose. 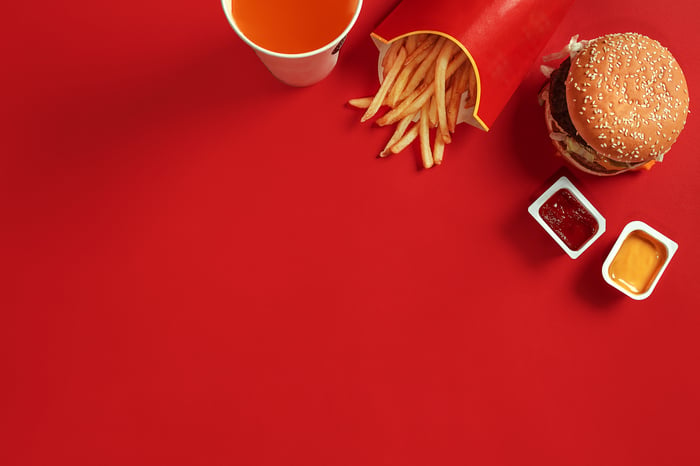 McDonald's the restaurant needs no introduction, but perhaps McDonald's the company does. The coronavirus has distorted current financials, but if we turn back the clock to 2019, we get a clearer picture of the business. Of the nearly 40,000 locations around the world, 93% are owned by franchisees. The 7% operated by the company generated 45% of total revenue. Sales from franchised locations don't go to McDonald's, though the franchisees pay a small ongoing royalty. And franchise royalties made up only 19% of McDonald's top line. Most of the remaining revenue (36%) comes from rent payments. It turns out McDonald's is the landlord for many of its restaurant locations around the world.

To become a Dividend Aristocrat, you not only have to pay your dividend for at least 25 consecutive years, you have to raise your dividend every year. McDonald's recently announced it would be raising its quarterly dividend 3% to $1.29 per share, marking the 44th consecutive year of raising the payout.

I expect business for McDonald's to continue performing well and for the company to keep the dividend streak going. Therefore, I don't think the stock has much downside. But I do question the upside. Overall revenue increases by a relatively small amount when restaurant sales go up, given the diverse income streams. And when you have 40,000 locations, there are only so many more restaurants you can open. 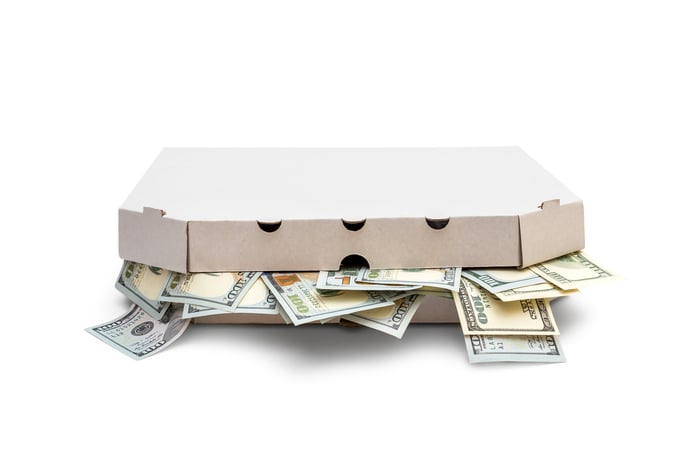 Papa John's is making a comeback. In 2018, sales were slumping, and the company parted ways with its founder, John Schnatter. New CEO Rob Lynch took over in Aug. 2019, and the company's results have steadily improved since then. Comparable-store sales are a measure of sales at stores open at least a year, and Papa John's global comps have increased for five consecutive quarters. That's a good start.

Papa John's comps in North America were down 10.5% in 2018. When sales decline per location, it hurts profitability, because restaurants lose operating leverage. And that was particularly bad for Papa John's franchisees. In North America, franchisees closed more locations than they opened from 2017 through 2019.

Through some new menu items and an $80 million fund to support advertising and lend financial aid, Papa John's new management is seeing sales rise, resulting in fewer store closures. Shifts in consumer habits from the coronavirus pandemic also helped since pizza travels well for delivery. Comps were up a record 28% in the second quarter of 2020. This growth added three million new customers to Papa John's digital channels, which can be a long-term tailwind.

Earnings per share peaked back in 2017 at $2.83. Even with all the improvements to the business so far, the company only earned $0.65 per share in the first half of 2020. In short, this business still has a long way to go in its recovery. Nevertheless, the stock trades higher now than it did for much of 2017. To me, it seems like much of Papa John's turnaround is already priced in.

Right now, Papa John's is making good progress toward returning to its former glory. But what's the market-beating opportunity after that? I expect management will lay out its long-term vision once the pandemic is fully over. But for now, I don't see much upside. Sure, investors could buy now and collect the dividend while waiting for the company to discuss a clearer plan, but with just a 1.1% dividend yield, that's probably not the best option for income-hungry investors.

The dividend yield for McDonald's stock is twice that of Papa John's. This, and its reputation as a Dividend Aristocrat, make me comfortable choosing McDonald's today. That said, I think it will perform in line with the market at best, which may not be good enough for all investors.