Please ensure Javascript is enabled for purposes of website accessibility
Log In Help Join The Motley Fool
Free Article Join Over 1 Million Premium Members And Get More In-Depth Stock Guidance and Research
By Keith Speights – Oct 13, 2020 at 5:05AM

Spoiler alert: The answer is "yes."

It's not surprising that several of the biggest drugmakers in the world have emerged as leaders in the race to develop a coronavirus vaccine. After all, they have vast resources. Some developed their own COVID-19 vaccine candidates, while others used their money to team up with other organizations that had promising programs.

Novavax (NVAX -5.30%) stands as a clear outlier. At the beginning of 2020, the biotech's market cap was below $130 million. Even after a remarkable share price surge so far this year, Novavax remains only a fraction of the size of other drugmakers with leading coronavirus vaccine candidates.

But could little Novavax really beat its much bigger rivals in the coronavirus vaccine race? 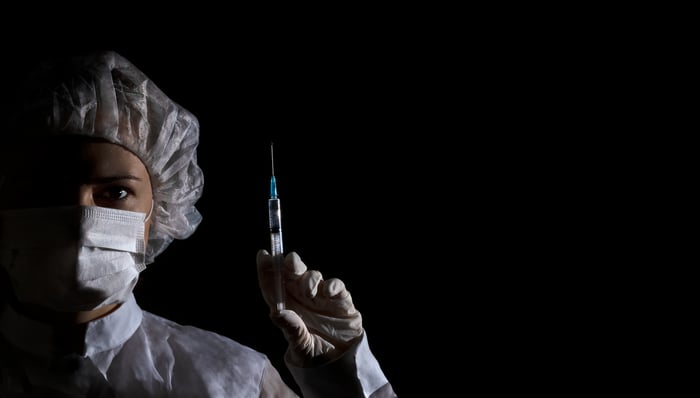 There's no question whatsoever that Novavax deserves recognition as one of the leaders in coronavirus vaccine development. On Sept. 8, nine biopharma CEOs together issued a press release about their pledge to "stand with science" to ensure the safety of their vaccines. Novavax CEO Stanley Erck was one of them, and his company was, by far, the smallest of the group.

Only 10 coronavirus vaccine candidates have begun late-stage testing. Novavax's NVX-CoV2373 is one of them. Only half of these vaccines are likely to reach the U.S. market. While Novavax is conducting its late-stage study of NVX-CoV2373 in the U.K. only at this point, it expects to soon begin a phase 3 study in the U.S.

Novavax is punching well above its weight class when it comes to securing supply agreements for its coronavirus vaccine program. Most importantly, the biotech landed a $1.6 billion deal with Operation Warp Speed to fund late-stage development of NVX-CoV2373 and supply 100 million doses of the vaccine to the U.S. if it earns regulatory approval. Novavax also inked an agreement with the U.K. to supply 60 million doses, and has reached an agreement in principle with Canada to supply up to 76 million doses.

To be sure, it's challenging to compare vaccine candidates based solely on preliminary early-stage clinical results. However, there are reasons to believe that Novavax's NVX-CoV2373 stacks up pretty well against other leaders in the coronavirus vaccine race.

Probably the biggest concern for any experimental vaccine is its safety. The results released so far indicate that the potential side effects of NVX-CoV2373 include injection site tenderness and pain, headache, fatigue, and muscle pain. But those same side effects have occurred with the other coronavirus vaccine candidates in late-stage testing. These side effects are also common with approved vaccines for other viral infections.

NVX-CoV2373 consists of what's called a "protein sub-unit" -- an isolated protein from the novel coronavirus that causes COVID-19 -- along with an adjuvant to boost the recipient's immune response to that protein. A similar approach has already been used with FDA-approved vaccines for other diseases. Two of Novavax's late-stage rivals use a messenger RNA (mRNA) approach that has never been used before in an FDA-approved vaccine.

In an early-stage clinical study, Novavax's candidate induced neutralizing antibodies -- the type that can potentially protect against coronavirus infection -- in 100% of participants. The Matrix-M adjuvant used by Novavax also induced robust T cell responses, another important sign of potential efficacy. These results prompted several analysts to express their views that Novavax's coronavirus vaccine could be "best-in-class."

How Novavax can win

Whether or not NVX-CoV2373 will ultimately be approved by regulators and capture the largest slice of market share among coronavirus vaccines remains to be seen. However, there's a good chance that Novavax could beat its bigger rivals in terms of stock performance. It's already the biggest winner in the coronavirus vaccine race so far this year on that front. And it's not even a close contest.

All Novavax has to do to keep winning is for NVX-CoV2373 to perform well in late-stage testing. Based on what we've seen so far, the chances of this happening should be relatively good. Historically, most vaccines (nearly three out of four) that make it to phase 3 clinical testing go on to win FDA approval.

Late-stage success for Novavax's COVID-19 vaccine will almost certainly cause the biotech stock to skyrocket. Because the company's market cap is still so much lower than its main rivals, Novavax's share price is likely to move a lot higher than the stocks of the other coronavirus vaccine leaders will if their vaccines perform well. Novavax's small size isn't a negative for investors; it's an advantage.