After shutting down its season on March 11, the NBA resumed games four months later, isolated in a Walt Disney World complex. After that four-month experiment in sequestering teams, coaches, and families from interaction with the public, the league has a champion -- and zero positive coronavirus tests.

An accomplishment like this obviously takes a lot of coordination, a little luck, and a lot of testing. The NBA originally partnered with Quest Diagnostics (DGX 0.03%), and later switched to OPKO Health's (OPK -2.82%) BioReference Laboratories. While not every sport is taking the same approach as the NBA did with its bubble (or having the same success), testing has been a key component of bringing sports back.

Despite a fragmented diagnostics market, Quidel (QDEL) and OPKO Heath are fast becoming the face of sports leagues' testing plans for making sure professional and college athletes are able to play safely. 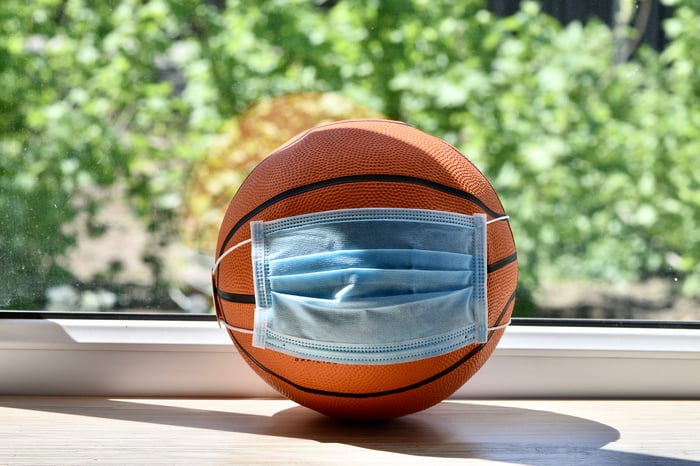 A drop in the bucket

There are more than 13 billion lab tests performed in the U.S. each year. All these tests are part of an estimated $80 billion global industry. Quidel's $535 million in 2019 was a small slice of that larger pie, but it's growing fast. Unlike Quidel, OPKO's $902 million revenue in 2019 represented a third consecutive year of decline.

In May, Quidel was the first company to get approval from the U.S. Food and Drug Administration (FDA) for a rapid 15-minute coronavirus test. Although many tests have since been introduced to the market, revenue from Quidel's has continued to outpace estimates. Management recently raised third-quarter guidance to $475 million to $477 million, almost 19% higher than previous estimates at the midpoint. For the final quarter of the year, management estimates $800 million in revenue, blasting analyst projections for $466 million.

OPKO, on the other hand, has been very conservative with guidance. Management has promised to update full-year guidance on the company's third quarter earnings call, due Oct. 29. Despite the conservatism, the company produced 33% year-over-year growth in the second quarter.

A part of the growth for both companies has come from sports. The two have dominated the headlines of major sports leagues' testing partnerships. The executive chairman of OPKO's BioReference Labs stated only last week that the company had run nearly 600,000 tests for the NBA and NFL. Although this additional testing pales in comparison to the volume of tests nationally, it could be a great indication of how testing may be the most logical path to a more recognizable future.

Some sports opted for the bubble approach, with players, coaches, and family members testing and isolating prior to entering a geographic location, then conducting routine testing and maintaining strict social distancing and masks for anyone who had to enter the bubble. Other leagues have taken a less draconian approach, testing routinely but not isolating players from society at large.

The two leagues with bubble approaches, the NBA and NHL, had zero positive tests during their experiments. Other leagues, such as Major League Baseball and the NFL, have done a good job limiting the spread but have had constant interruptions, delays, and rescheduling due to positive tests. For investors interested in the winners of all this testing, it's informative to list the sports partnerships.

These partnerships are contributing to significant increases in both Quidel's and OPKO's estimated revenue. Predictions have nearly tripled since the beginning of the year for Quidel. Despite all of its partnerships, OPKO's revenue estimates for the year are only up 43%. 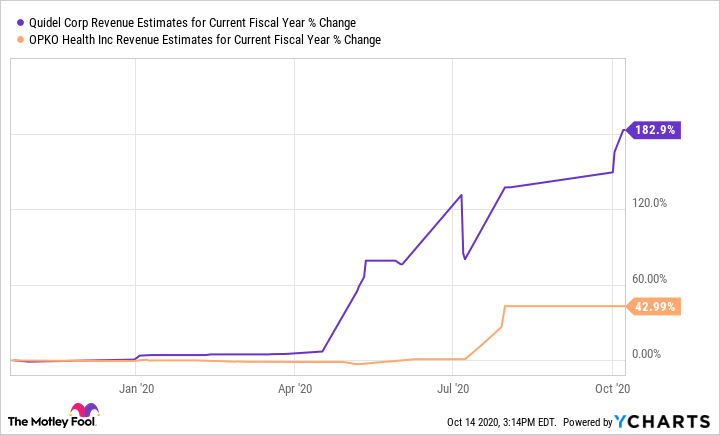 The future is likely filled with lots of tests, and a rising tide usually lifts all boats. With coronavirus continuing to spread through the summer and into the fall, it appears the virus is not seasonal, like the flu. One study published in China in July suggested that higher temperatures may actually increase the spread of the virus. Regardless, the demand for tests is limitless at this point, and it could prove to be that way over the long term.

Even if a COVID-19 vaccine is developed, not everyone will get it. A just-released poll showed that only 48% of Americans would be willing to get vaccinated. The pollsters have been tracking this number since March, and the latest reading was an all-time low. Another factor that will drive test volume is that no one is sure how long any post-infection immunity lasts. There have been several documented cases of people becoming infected a second time, including one case in the U.S.

Quidel recently updated guidance, announcing a goal of producing 220 million tests per year by July 2021. OPKO's latest announcement was a partnership with New York City schools to conduct a testing program. Both of these are clear indicators that testing is here to stay for the foreseeable future, and these companies are at the forefront of that new normal. If our lives permanently changed in March 2020, investors who buy shares in OPKO Health and Quidel could be on the path to profit from a somewhat dystopian future.