Small-cap stocks may be risky, but they offer the kind of life-changing growth that you won't typically find in large caps.

If you've ever wished you could invest in the next Amazon (NASDAQ:AMZN), then small-cap stocks are probably a good choice for you. These companies are small enough that they can generate outsized returns, sometimes growing 100 times or more above their original value. But that upside potential comes with risks. Like any investment, small-cap equities offer advantages and disadvantages.

Before we review the pros and cons of small-cap stocks, you should know they are generally defined as having market capitalizations (market caps) -- meaning the share price times the number of shares outstanding -- of about $300 million to $2 billion. 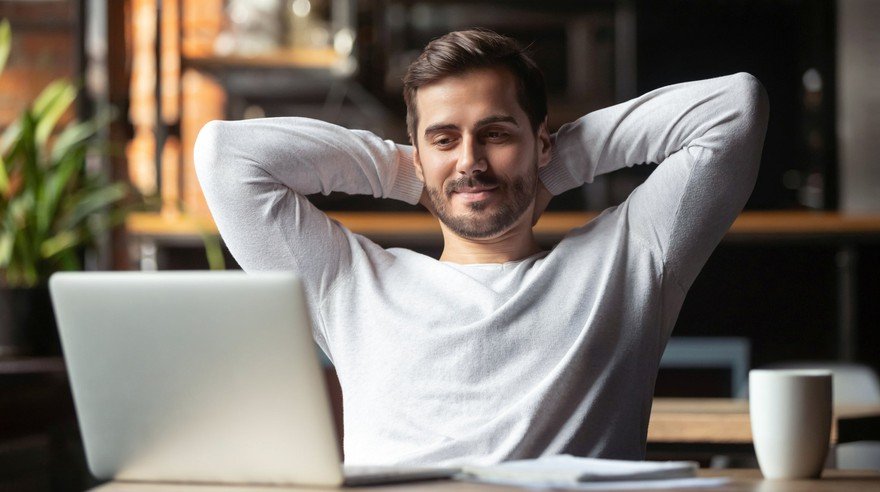 The risks of investing in small-cap stocks

Small-cap stocks can be quite volatile. That isn't necessarily a problem, but some investors don't have the appetite for wild swings. Large-cap stocks tend to outperform small-caps when market volatility, as measured by the CBOE Volatility Index (VOLATILITYINDICES: ^VIX), rises. The chart below shows the small-cap-focused Russell 2000 Index (RUSSELLINDICES: ^RUT) tends to lose more value, too, during bear markets compared to the large-cap benchmark S&P 500 (SNPINDEX: ^GSPC). 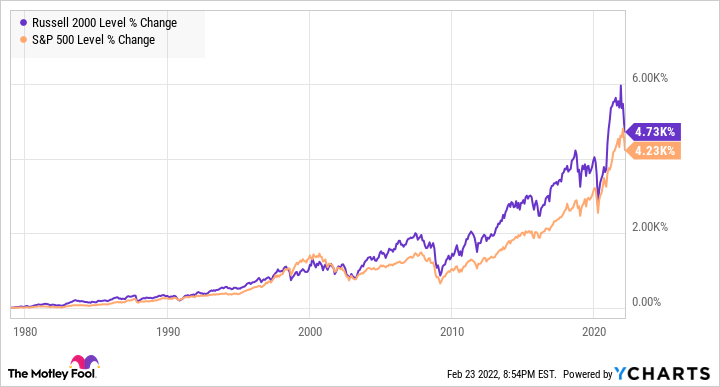 The movements of the Russell 2000 Index are also comparatively more exaggerated. Because of the equity risk premium, which means that investors expect to get a greater return for taking on more risk, small-caps should in theory deliver greater returns than lower-risk stocks.

The chart above doesn't account for dividends reinvested, and another drawback of small-cap stocks is that relatively few of them pay dividends. Smaller companies typically need every extra dollar to expand their business, while mature companies with reliable profit streams are more likely to have more cash on hand than they can productively deploy. Consequently, large caps tend to be safer stocks. The chart below shows that, with dividends reinvested, the S&P 500 has outperformed the Russell 2000 Index since 1990. 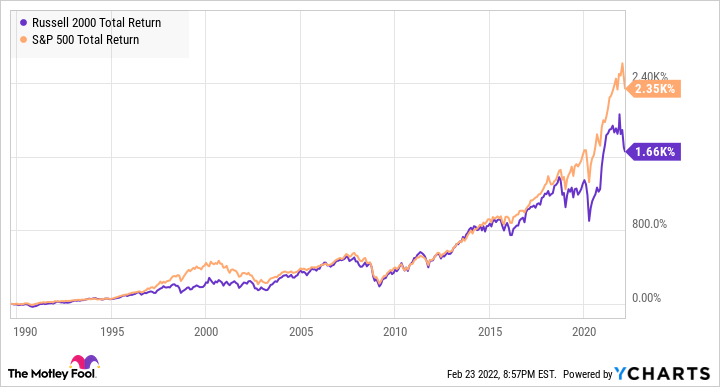 Small-cap stocks have less-certain long-term prospects, too. A small company might have a terrific technology or product, but it will ultimately fail if it doesn't have enough cash to bring the product to market and achieve profitability. Small-cap companies tend to be in earlier stages in their life cycles than large-cap companies, meaning they are more likely to be unprofitable.

During the height of the COVID-19 pandemic rally, stocks of companies with almost no revenues in sectors such as renewable energy and electric vehicles have surged into the small-cap arena. These stocks are inherently riskier than those of larger companies with stable revenue streams. Small-cap stocks tend to derive value from their growth potential rather than existing assets or profits, but their growth potential may never be realized.

Small-cap stocks are more at risk during market downturns, as the early months of the pandemic demonstrated. During the first months of the crisis, small-cap stocks underperformed their large-cap peers by a significant margin, as shown above. However, in the recovery, the reverse was true since investors bet on a surge in pent-up demand and as consumer spending jumped after several rounds of stimulus. More recently, small-caps underperformed to start 2022, and the stock market pulled back over fears of rising interest rates and the crisis in Ukraine.

Small companies tend to underperform in recessions and bear markets because they simply don't have the same resources as large companies and aren't industry leaders that can more easily survive unexpected emergencies. They can't borrow money as easily as big companies, don't have as much cash on hand, and are more likely to have negative cash flows. They're also riskier since they are generally unproven companies. For all of those reasons, they have a greater chance of going bankrupt or suffering a significant setback during market contractions.

The rewards of investing in small-cap stocks

The main reason to own small-cap stocks is growth potential. That potential doesn't always come to fruition, though, so choose your small-cap stocks carefully. It is much easier for a $1 billion company to double in value to $2 billion than it is for a $1 trillion company to increase its value to $2 trillion. Large-cap stocks, unlike their smaller counterparts, are limited by this truism, which is known as the law of large numbers. As a general rule, growth rates tend to slow as businesses mature and get bigger.

Although small-cap stocks typically increase in value more quickly than their larger counterparts, they tend to receive less attention from Wall Street. Institutional investors, such as mutual funds and pension funds, primarily buy large-cap stocks. That focus means retail investors can often profitably gain exposure to small-cap stocks before the big money moves in. And, if they've chosen well and the stock's value grows rapidly, then the share price will get a further boost as Wall Street and institutional investors take notice. Retail investors also have a better chance of discovering undervalued gems among small-cap stocks because major investors are almost exclusively focusing on the stocks of larger companies.

Finally, small-cap stocks have traditionally outperformed large-caps in bull markets since small companies that capture opportunities during strong economies can proportionally grow much more. After a sustained period of growth, a small-cap stock can grow into a mid-cap stock or even a large-cap stock if the business performs exceptionally well. For instance, Etsy (NASDAQ:ETSY) was a small-cap stock as recently as 2017. Now it's worth $15 billion and has joined the S&P 500.

Where small-cap stocks fit in your portfolio

Small-cap stocks run the gamut from value stocks to dividend-paying stocks to growth stocks. Some small-cap companies have operated for years, while others just recently completed their initial public offerings (IPOs). Investors interested in small-cap stocks will do better by focusing on companies that can deliver outsized growth. These companies are characterized by high revenue growth, relative youth, and competition in industries with large and rapidly growing addressable markets such as e-commerce and cloud computing.

Investors seeking to gain exposure to a broad range of small-cap stocks can also buy shares in index funds such as the Vanguard Small Cap Index Fund (NASDAQMUTFUND:NAESX). This passively managed fund sports an attractive expense ratio of 0.17% and holds both small-cap stocks and stocks of larger companies that originated as small-caps and have since grown immensely (sometimes above $2 billion in market value).

Although small-cap stocks generally carry greater risk than the stocks of large companies, risk cuts both ways. Small-caps are more likely to lose value during a recession, but the attractive upside potential in bull markets makes them worth the risk for many investors. If you're able to spot and invest in the next Amazon, that's the kind of life-changing investment that will not only make you rich but also make up for dozens of other stock losers in your portfolio.

What Is the Future of Ethereum After The Merge?

Could This Bitcoin Rally Finally Have Staying Power?

This One Thing Could Be a Huge Catalyst for ApeCoin

Is Bitcoin a Buy in September?

This Crypto Will Be the Solana of 2022