Revenue is growing as the company expands distribution, but what happens once its products are widely available?

Of the market-crushing stocks in 2020, mattress company Purple Innovation (PRPL -1.21%) is relatively unknown. The company went public in 2018 via a special purpose acquisition company (SPAC) -- before it was cool. Over the next two years, the stock traded in a tight range before tanking with the market in March, crashing below $5 per share.

But everything has changed since then. Purple stock is up roughly seven times in value from those March lows and hitting all-time highs as of this writing. Could it still be a good stock to buy? 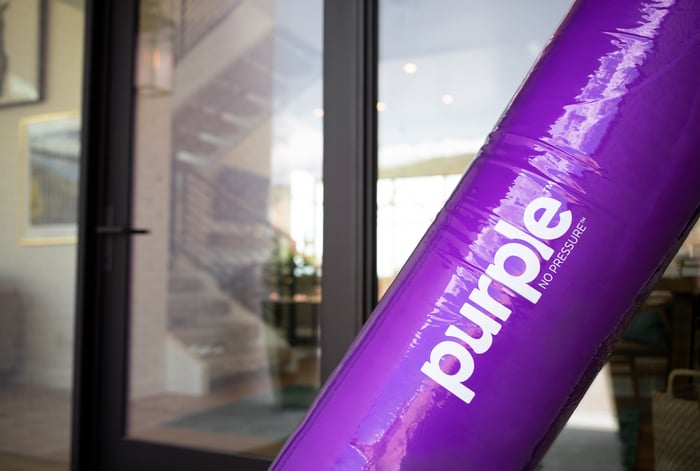 Purple doesn't make foam mattresses like its competitors. The company uses its proprietary Hyper-Elastic Polymer -- a gel-filled material designed to deliver superior comfort. Purple's intellectual property has been around for about 30 years, but it didn't sell a mattress until late 2015. That's because there wasn't a machine capable of making them until Purple developed its own machine called Mattress Max.

The company sells seat cushions as well, but this is primarily a bedding business. In 2019, 94% of sales came from the bedding category. The company also says it's a "digitally native" business, and indeed, it has strong direct-to-consumer sales. In 2019, the DTC channel made up 62% of overall sales, and it was 88% of sales in the second quarter this year.

Purple may be a digitally-native brand, but it has rapidly grown revenue by expanding its wholesale business. In the third quarter of 2018, just two years ago, its products were only sold in 192 third-party retail locations. Nowadays, you can find Purple mattresses in over 1,800 locations. It was easy growth, given the company already had Max machines running below capacity. Like flipping a switch, it simply made more mattresses as distribution increased.

However, when the COVID-19 pandemic hit, Purple ran into a problem. Its online sales suddenly surged, and it actually didn't have enough machines to keep up with demand. The company is currently operating at capacity.

That's a problem, but the company is moving quickly to open a new manufacturing facility near Atlanta later this year. It will immediately house the company's eighth and ninth Max machines to increase production capacity by 25% to 30%. Next year, the company would like to launch four more machines, almost doubling its manufacturing capabilities from today.

Beyond increasing production, the new facility has an additional benefit. Purple mattresses currently come from Utah, and it's expensive to ship products across the country. Going forward, it can reduce expenses by having facilities in both the East and the West.

Purple stock may present a compelling value. Right now, it trades for around three times trailing 12-month sales -- a premium compared to other mattress companies like Tempur Sealy International (TPX 3.75%), Sleep Number (SNBR 0.79%), and Casper (CSPR) -- but it deserves a premium valuation for its superior revenue growth. 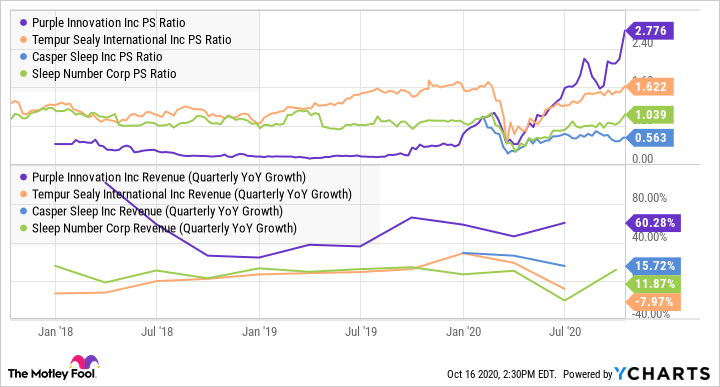 Regarding profit potential, Purple's gross margin has steadily increased and was at 49.4% in the second quarter, compared to 41.5% in the same quarter last year. That's not as good as Sleep Number's 63.1% gross margin, but Sleep Number should have better margins, because 99.7% of its sales are DTC. This helps Sleep Number's profitability, but it likely limits growth. Therefore, Purple's management is smart to have a balanced approach to distribution, even if it hurts the bottom line a little.

Casper's 51.8% gross margin in the second quarter is also better than Purple's, but its business isn't scaling as well. General and administrative expenses came in at 40% of Casper's revenue so far in 2020, up from 35% last year. By comparison, Purple has spent less than 6% of revenue on such expenses in the same period. As the company increases sales and keeps expenses low (further helped by the new manufacturing facility), it has a chance to start cranking out consistent operating profits. 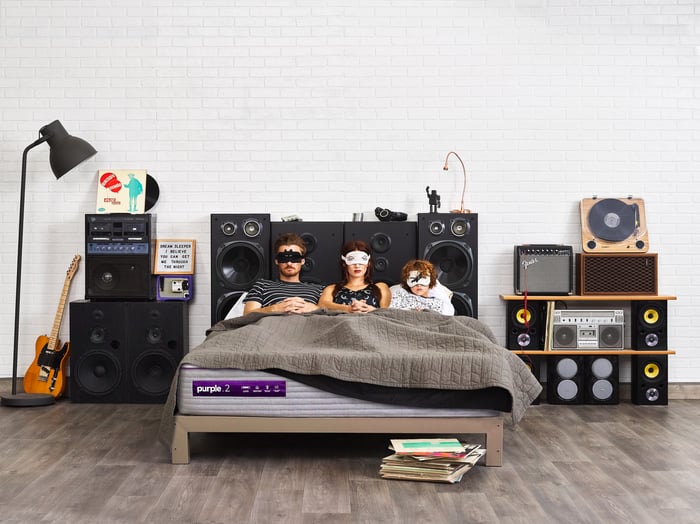 Even with 1,800 points of distribution, Purple can grow significantly from here. Consider Tempur Sealy is in 2,500 Mattress Firm locations alone -- not to mention thousands of other retail outlets. As Purple increases production capacity, it's not outrageous to think it could double or triple distribution.

That means Purple can grow significantly, and it's trending toward profitability, which may be enough for some to buy this growth stock. However, mattresses are one-time, infrequent purchases. Once Purple's products enjoy wide distribution, it will be hard to maintain revenue growth. Furthermore, at its current pace, it could reach wide distribution in just a matter of years, not decades.

For this reason, I wouldn't consider Purple a must-have in your portfolio. Management will need to be good capital allocators to generate ongoing shareholder returns. And at this point, that's impossible to predict.