Please ensure Javascript is enabled for purposes of website accessibility
Free Article Join Over 1 Million Premium Members And Get More In-Depth Stock Guidance and Research
By Sushree Mohanty - Oct 22, 2020 at 7:18AM

This pot company's Q1 results dragged down its stock, but there's still a glimmer of hope.

Canadian marijuana company Aphria ( APHA ) is often viewed as a (relatively) safe pot stock pick. Aphria's peers, including Aurora Cannabis ( ACB -5.21% ) and Canopy Growth ( CGC -3.57% ), have recently gone on acquisition and expansion sprees, scaring some investors away with rapid growth strategy implementation. These actions have made it hard for Aurora and Canopy to control their expenses and grow revenue high enough to achieve positive earnings before income, tax, depreciation, and amortization (EBITDA). Aphria has noted their examples, and is instead taking an asset-light approach to business and focusing on its core operations in Canada. However, Aphria's fiscal 2021 first-quarter results, reported Oct. 15, disappointed investors, and the stock dipped 18%.

Aphria's bottom line is what truly spooked investors. Losses for the quarter ended Aug. 31 came in at 5.1 million Canadian dollars compared to a net profit of CA$16.4 million in the year-ago period. But was it all bad news in the first quarter, or is it wise to buy this stock during its dive? 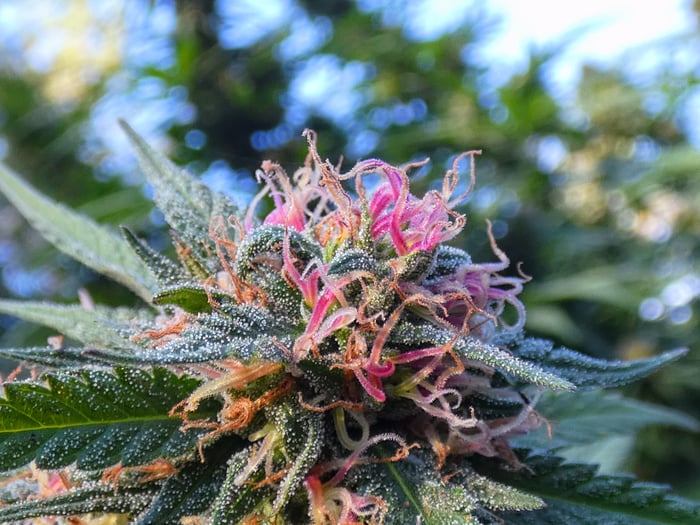 Net losses in Q1 did not please investors

The net losses in the first quarter were a huge letdown. But on the bright side, losses came in lower than the loss of CA$98.8 million in Q4 2019. Aphria also reported a 17% decline in distribution revenue to CA$82.2 million, a fall from CA$95.3 million in Q1 2021. Its distribution revenue includes CA$79.6 million from its German subsidiary CC Pharma and CA$250,000 from its other distribution locations in Malta, Italy, Colombia, Argentina, Australia, and Israel.

In the recent earnings call, management said the distribution revenue decline was a result of the coronavirus pandemic. But note that a sizable chunk of Aphria's revenue still comes from its medical and recreational product segments. Its selling, general, and administrative costs (SG&A) are probably most responsible for the drag on the bottom line, having increased to CA$54.4 million from CA$41.14 million in the year-ago quarter. Management attributed the jump to increased operating linked to rising global operations and a hike in selling costs associated with the company's higher sales.

The total net revenue for the quarter grew 16% year over year to CA$146 million but fell 4% from the prior quarter. Sales also missed analysts' estimates of CA$160 million.

When a company reports losses, other good things happening in the background can sometimes go unnoticed. This absolutely applies to Aphria. Even though distribution revenue declined, the company grew cannabis revenue from CA$35 million to CA$82.2 million in Q1. Cannabis revenue even increased sequentially from CA$65.4 million in Q4.

Aphria's dependence on distribution revenue from its German subsidiary and others could be detrimental in the longer run. Instead, it should focus on growing its revenue in its home country. Canada has legalized both medical and recreational cannabis, as well as derivative products. (Derivatives like vapes, edibles, concentrates, and beverages have only been legal nationwide since October 2019.) A main challenge in Canada is the regulatory hold-ups that delay legal store openings, but that situation seems to be improving this year. It's evident that Aphria is slowly directing efforts toward its home country, by looking at the jump in recreational and medical revenues this quarter.

The first quarter of FY 2021 marked Aphria's sixth consecutive quarter of positive EBITDA. The measurement rang in at CA$10 million, a drastic jump from CA$1.0 million in the year-ago quarter. This achievement means more in the context of Aphria's peers' struggles. Aurora Cannabis, for example, is slashing costs through rationalizing facilities in an effort to achieve positive EBITDA by the second quarter of FY 2021.

Should you buy and hold this stock after its Q1 results?

The U.S. is another key marijuana market for Aphria. Cannabis derivatives  will have an immense opportunity in a legalized U.S. market -- if (or when) federal legalization comes.

Aphria is seeing promising numbers from its vape products, which contributed 13% of total gross cannabis revenue in the quarter. Vape sales also increased by 17% sequentially, proving the strength of Aphria's brands. It sells its medical and recreational marijuana products under the Aphria, Broken Coast, and Solei names.

Aphria ended the first quarter strong with CA$400.0 million of cash and cash equivalents, which it plans to use to fuel expansion in Canada and internationally. Shares of the stock are down 11% so far this year, better than Canopy and Aurora's dips of 16% and 84%, respectively. Meanwhile, the Horizons Marijuana Life Sciences ETF has sunk 30.3% over the same period. 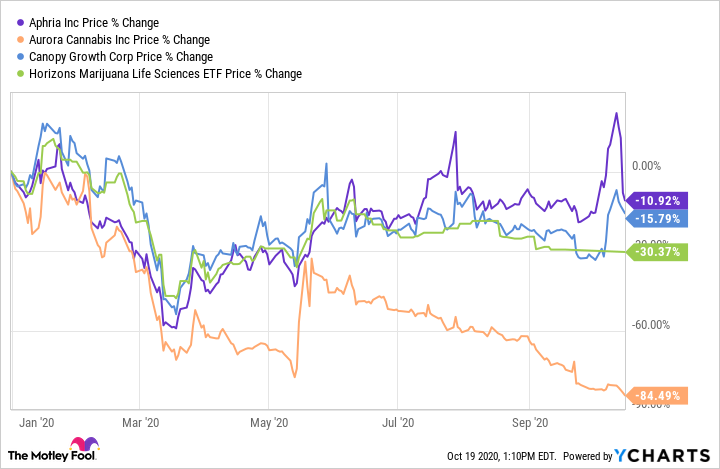 Despite its current dive, Aphria remains one of the best cannabis stocks available. With some of the best revenue numbers in the industry, a strong balance sheet, and consistent EBITDA, this pot stock's future is still looking bright.