It's a Dividend Aristocrat, it has an annualized return of 26% over the past decade, and its most famous services are just the beginning of its well-diversified business.

The financial sector hasn't been the best place to mine for good stock buys during the pandemic and resulting recession -- at least in general terms. The sector is down about 18% year to date, far underperforming the S&P 500, which is up about 7%. But that doesn't mean you can't find great financial stocks, both for now and the long term.

Of course, there is much uncertainty in the sector due to a variety of factors, from the economy to interest rates. But there is one stock in particular that I love for the long term no matter what the market and economy do in the short term: S&P Global (SPGI 1.54%). 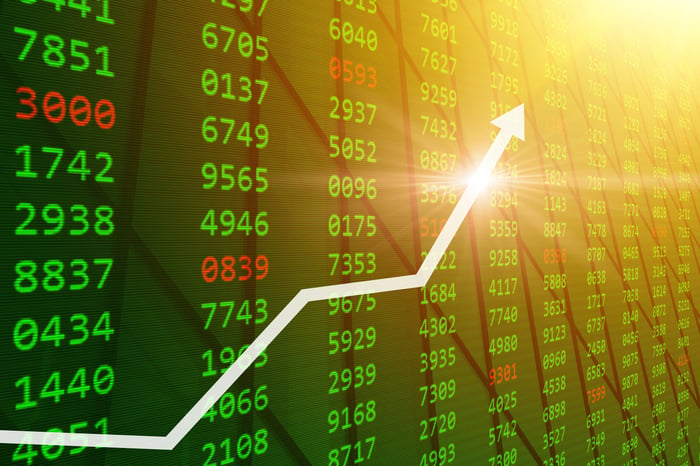 An annualized return of 26% over the last 10 years

S&P Global is probably best known for its market indexes, namely the S&P 500 and the Dow Jones Industrial Average (which it runs through a partnership), among others. But it's S&P's credit ratings business that accounts for most of the company's annual revenue, about 51%, compared with the index business, which accounts for 12%. The market intelligence arm -- including Platts, which provides data and research for investment professionals -- makes up 37% of revenue.

But all three combined give S&P Global a great mix of business that helps the company generate earnings throughout pretty much any market cycle.

The proof is in the earnings, as the company has enjoyed double-digit annual earnings growth consistently over the past 10 years. That is reflected in a stock price that has not had a negative annual return since 2008. Over the last 10 years, the stock price has an annualized return of 26%. Even this year, a volatile one to be sure, it has gained 23.5% through Friday's close.

Let's look at what is driving the success.

The ratings business has been the cash cow over the years, as it is protected by a wide and deep moat. There are only three major debt ratings agencies in the U.S.: S&P Global, Moody's, and Fitch. S&P and Moody's own most of the market at 40% each, followed by Fitch at 15%. There's little competition, and it will stay that way, as the ratings space is highly regulated and doesn't need more than a few players. The income is all fee-based, so it generates consistent income, which spikes when debt issuance is high. In the most recent quarter, S&P's ratings business generated $1 billion in revenue, a 26% jump, and $693 million in profit, a 51% increase over the previous year.

That issuance revenue is consistent, but even when it's down, the index and market intelligence arms -- which are also based on fees and subscriptions -- pick up the slack.

Like the ratings arm, S&P's index business has a wide moat, in that there's little competition and it generates consistent income, charging fees to companies that are listed as well as fees for trades and transactions. So, when markets are more volatile, fee income is typically higher. In the second quarter, the index business saw profits jump 5%, but the previous year it had a 19% spike. It's the market-leading position in both of these well-protected markets that sets S&P Global apart from competitors.

In addition, S&P Global is asset-light, meaning it doesn't own a lot of physical assets and therefore has low overhead. That gives it strong profit margins (around 36%) and lots of free cash flow. The company's operating profit margin jumped 920 basis points (meaning 9.2 percentage points) in the second quarter to 56.9%, led by the ratings business, where the margin was almost 69%. That generates a lot of free cash flow for the company to invest. Through the first six months of 2020, it had $1.5 billion in free cash, up from $936 million in the previous year's first six months.

The other thing to love about S&P Global is its dividend. The stock has reached the coveted status of Dividend Aristocrat because it has increased its dividend payout to shareholders for at least 25 consecutive years. S&P Global has actually done it for 46 straight years, which means it's approaching the lofty status of Dividend King -- 50 straight years of dividend increases. The company approved a $0.67 per share dividend for the third quarter, which comes out to $2.68 per share annually (albeit a yield of 0.8%).

From earnings to income and a business model that is built to weather any environment, S&P Global is a stock that you can set and forget.