Please ensure Javascript is enabled for purposes of website accessibility
Log In Help Join The Motley Fool
Free Article Join Over 1 Million Premium Members And Get More In-Depth Stock Guidance and Research
By Dave Kovaleski – Updated Jul 8, 2020 at 10:57AM

With a 28% year-to-date return, S&P Global has shown its ability to navigate the market's ups and downs.

Standard & Poor's is a household name among investors -- the company's S&P 500 index is the primary benchmark for most stocks. But S&P Global (SPGI -1.64%), the company that owns the S&P Dow Indices through a partnership with CME Group and News Corp., may not be as well known.

The company, which changed its name from McGraw Hill Financial in 2016, has been a solid, consistent performer in a variety of market environments -- and not just because of its indices. In fact, most of its revenue comes from the global ratings and market intelligence businesses. Let's take a closer look at why S&P Global is a financial stock you should get to know. 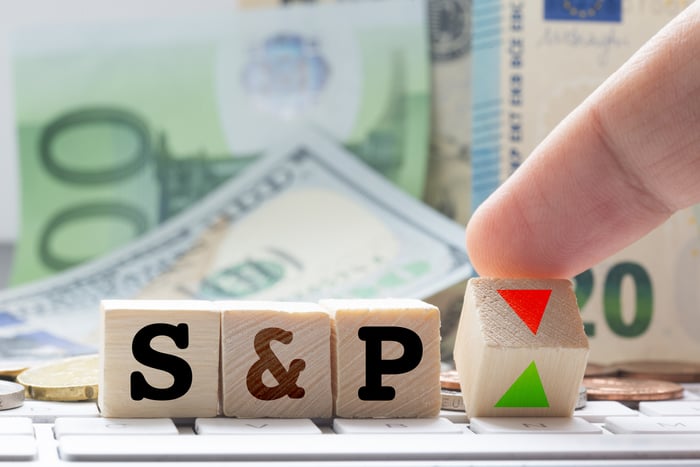 S&P Global has been one of the top-performing financial stocks this year, up more than 28% as of midday Wednesday -- far outperforming its very own S&P 500, which is down about 2.5%, and the overall financial sector, which is down roughly 18%. Since 2016, the stock has posted an annualized return of about 31%, and has achieved positive annual returns each year.

What has driven S&P Global's success? Let's start with its ratings business, where it is a big fish in a large pond with very few fish in it. In fact, there are only three major companies that rate the creditworthiness of bonds issued by private and government entities: S&P Global, Moody's, and Fitch. S&P Global and Moody's are the two leaders, with about 40% of the market share each, with Fitch at less than half that. It is a market leader in an extremely limited pool of participants. Plus, the credit ratings business isn't likely to see much in the way of competition -- it's not optimal to have too many firms rating bonds or the ratings get watered down. Plus, the barrier to entry is very high, as the space is well-regulated.

That said, revenue in the ratings business is closely tied to the amount of debt issuance. In the first quarter, global bond issuance was up 11%. That translated into a 19% increase in revenue year-over-year to $825 million for SPGI's ratings business. That made up about 46% of the company's $1.7 billion in revenue in the first quarter. The company does expect debt issuance to be down the rest of the year due to the recession, but S&P Global has other revenue streams -- more, in fact, than chief competitor Moody's.

S&P Global's second-biggest revenue driver is the Market Intelligence business, which provides data, research, and tools to help investment professionals, government agencies, corporations, and other organizations gain valuable market intelligence. Market Intelligence produced $519 million in revenue in the first quarter, roughly 29% of total revenue. This and Platt's, which provides prices and analytics for the energy and commodities markets, are largely subscription-based. During the recession, both are expected to see revenue declines, but they are sound long-term businesses.

The S&P Dow Jones Indices -- which include the S&P as well as Dow Jones indices -- make up about 14% of the company's revenue. In the first quarter, revenue for this business climbed 20% to $259 million, due mainly to a 59% increase in exchange-traded derivative fees and an 11% rise in asset-linked fees. Operating profit margin in the index business increased 90 basis points -- or 0.90 percentage points -- to 70% in the quarter.

Overall, the company posted a 59% increase in earnings per share to $2.62 in Q1. Operating profit margin jumped 610 basis points to 51% in the quarter, but it has been in the 35% to 50% range for each of the last four years. The company's price-to-earnings ratio has crept up to 35 times earnings, which may be a bit high given expectations for low growth over the next few quarters -- but long-term, it's not far out of the historical range, and the stock has consistent long-term earnings potential.

Even still, with its moat in the ratings business and strong revenue diversity, S&P Global is one of the best buys in the financial sector.

This Rock-Solid Dividend Aristocrat Hasn't Been This Cheap Since 2019: Is It a Buy?

How This Megamerger Created a Cash Cow