The only thing left to prove is that its X-ray technology actually works.

Nano-X Imaging (NNOX 1.33%) is one of the newest medical equipment companies to trade on the open market, but it's already facing a handful of maladies since its initial public offering (IPO) in August. Nano-X is the defendant in a shareholder lawsuit alleging that it misled investors regarding the capabilities of its flagship X-ray equipment. Its stock has suffered from a jarring collapse spurred by high-profile short-selling, from which it has yet to fully recover. In particular, the perennially critical Citron Research group claims that Nano-X's product is largely a fraud as a result of over-promising and under-delivering proof of its efficacy.

To address these allegations, the company has committed to demonstrating its technology at an upcoming healthcare conference. Time will tell whether the product is truly as capable as Nano-X claims. In the meantime, its stock has proven to be quite volatile, which may drive away more conservative investors. Nonetheless, the future may still be bright for Nano-X for three key reasons. Investors with a stomach for risk should take note. 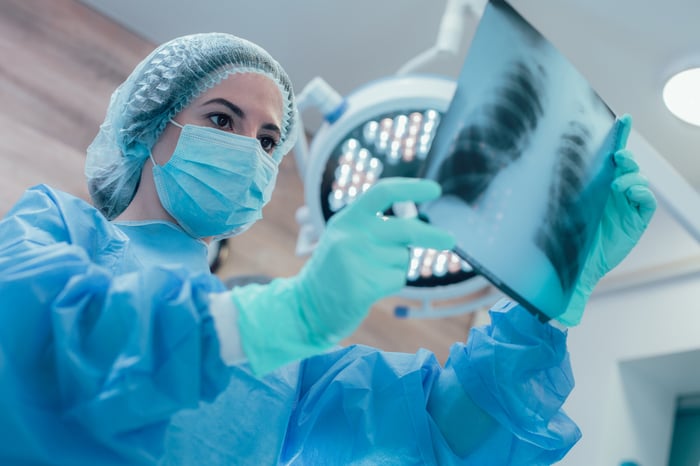 1. Its X-ray system may be a cheaper alternative to traditional hardware

In sum, the Nanox.ARC is a less expensive X-ray machine that produces similar images to traditional X-rays, but without some of the headaches. Whereas a traditional X-ray tube might cost as much as $150,000, Nano-X expects its tubes to cost as little as $100 per unit. In terms of an entire X-ray machine, the Nanox.ARC could cost tens of thousands of dollars in comparison to traditional machines that cost millions. When paired with its expected lower operating costs, this is a massive green flag for Nano-X, because it means that its product is significantly more appealing for the most price-sensitive consumers, like hospitals in developing countries.

2. Regulatory approval is looming, and pre-orders are already pouring in

In the U.S., Nano-X expects to earn regulatory approval for the Nanox.ARC in the first quarter of next year, with approval in other world markets shortly thereafter. In the meantime, the company has already booked more than 5,150 preorders for Nanox.ARC units. At the current rate of orders, the company believes that it will have an installed base of 15,000 machines by 2024. This might only be the beginning for Nano-X, however.

Because Nano-X's product is comparable to the high-cost X-ray machines on the market, many of its customers are hospitals and clinics that don't have the resources to conduct X-rays in-house. By offering a low-cost X-ray machine to these smaller customers, Nano-X will be providing them with a tool to drive new revenue -- and that's all but certain to spark demand.

3. Its pricing model opens the door to unexploited segments in the imaging market

The final green flag for Nano-X is its innovative service model for the Nanox.ARC, which investors in traditional healthcare companies are particularly likely to appreciate. Nano-X plans to operate its machines at a pay-per-scan pricing model, paired with a minimum annual service fee. This could drive down the cost of individual scans to as low as $14 per scan while also keeping up-front capital expenditures low.

Aside from being a major departure from the capital intensive business model of traditional X-ray machine manufacturers, Nano-X's approach to medical imaging as a service may be a major driver of revenue. But because Nano-X is pioneering a new business model, investors shouldn't be surprised if it needs tweaking in the first year or so after launch.