On Wednesday, red hot Enphase Energy (NASDAQ:ENPH) dropped over 12% as part of a broader sell-off in solar stocks. Even with the sell-off, Enphase has been one of the best-performing stocks on the market this year, increasing by nearly 300% year to date and 2,000% over the past two years.

Let's determine if Wednesday's sell-off was just a bump in the road for Enphase or if the stock is overvalued.

Given Enphase's astronomical surge over the past couple of years, it's easy to forget the company's relatively recent success story. After all, it was only a few years ago, in the spring of 2017, when Enphase traded below $1 a share. Today, Enphase trades at over $100 a share.

Threatened with bankruptcy, Enphase began a restructuring that resulted in layoffs and attempts to raise more capital. The strategy worked, and Enphase turned the corner in 2019, reporting the first profitable year in the company's history.

Enphase's struggles largely stemmed from profitability issues with its microinverter model during a time when rival PV-inverter supplier SolarEdge Technologies (NASDAQ:SEDG) was gaining market share with its power-optimizer model. SolarEdge's power optimizers can be serially connected in the form of strings that can then be connected in parallel to an inverter. This is a cost-effective solution compared to Enphase's microinverter model, which instead attaches a small inverter to each solar panel. However, SolarEdge's model requires higher upfront commitment and spending, whereas Enphase's model allows for the gradual expansion of a system.

As solar energy costs have come down, renewable energy adoption has gone up. U.S. renewable energy consumption surpassed coal consumption in 2020 for the first time in over 130 years. The rising tide has lifted all ships, and SolarEdge and Enphase are now two of the largest solar stocks on the market today.

A surge in revenue contributed to Enphase's 2019 profitability, which nearly doubled compared to 2018. 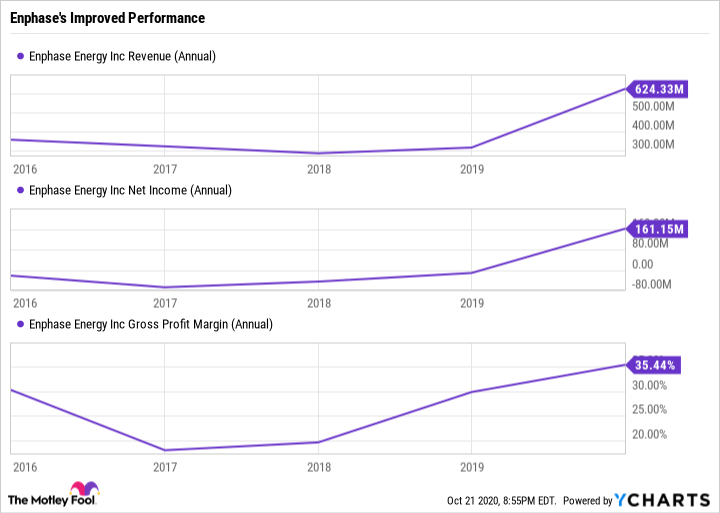 In the company's second quarter, growth slowed slightly, as it reported a 39% decline in revenue compared to its first-quarter 2020, and a 6% decline compared to its second-quarter 2019. However, Enphase reported its highest gross profit margin ever at 39.6%, which is impressive, considering its revenue decline.

Enphase's profitability was recently called into question as the company technically lost money in the second quarter. When using generally accepted accounting principles (GAAP), Enphase reported a net loss of $47.3 million in its second quarter, compared to net income of $68.9 million in the first quarter.

Using non-GAAP numbers, Enphase recorded net income of $23.5 million for the second quarter and $51.9 million for the first quarter. Part of the disparity between GAAP and non-GAAP is that non-GAAP doesn't factor in stock-based compensation, which now represents a major expense for Enphase. 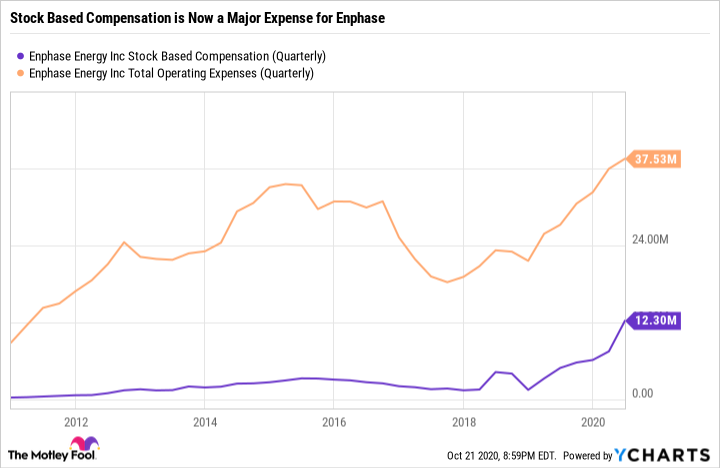 Even with a mixed second quarter, Enphase has emerged as a market leader in an attractive industry. For that, it deserves a premium valuation, especially if it achieves sustainable profitability and continues to grow revenue.

However, Enphase is, by far, the most expensive established solar stock on the market, currently trading at a price to sales (P/S) ratio of 19, more than double the P/S ratio of SolarEdge. 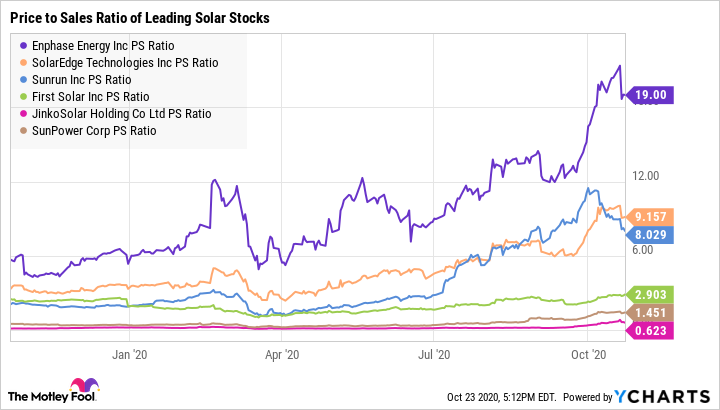 Enphase's recent revenue decline and net loss from a GAAP perspective indicate that Wall Street may have gotten ahead of itself in valuing Enphase as essentially an unstoppable growth stock. There's plenty to like about Enphase's high gross margins and revenue growth, but its net income per diluted share in the first half of 2020 was just $0.55, so it has some ground to cover if it wants to exceed 2019 net income per diluted share of $1.23.

Wait for a pullback

Enphase's sell-off on Wednesday is a tempting offer for investors who want to jump into one of the hottest growth stories of the past two years, but there are reasons to be cautious. Just a few years ago, Enphase was struggling to make ends meet. It only recently started to improve its revenue and achieve profitability, both of which must continue to grow in order to justify its lofty valuation.

Given the uncertainties that surround Enphase, it's probably best to hold off buying shares right now. In the meantime, the company definitely deserves a spot on every growth investor's watchlist in the event its stock price reaches a more reasonable price or the company proves it deserves its current valuation.