These two stocks have very different methods of generating returns.

Comparing Illumina (ILMN 0.82%) with Exelixis (EXEL 2.19%) feels like a mismatch. The former is a dominant provider of genome sequencers serving as -- some might argue -- the foundation for the future of medicine. The latter is a scrappy biotech stock that has found ways to survive, despite setbacks, for more than 25 years.

Regardless of previous success, investing is about the future. And the prospects for these two companies may not be as drastically different as you might think if you only looked at the past. So who wins in a contest between the $47 billion gene sequencing leader and the $7 billion biotech trying to stretch every dollar out of a drug it developed a decade ago? 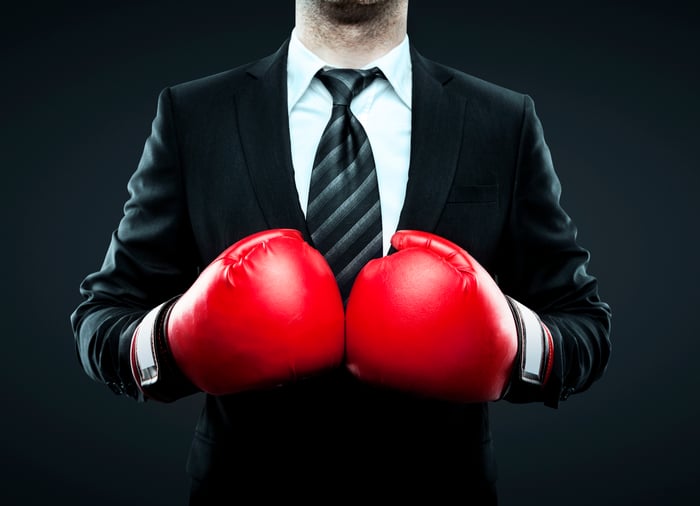 DNA sequencer products, like Illumina's, allow scientists to determine the information and instructions carried by a DNA sample. Illumina currently offers eight varieties of its sequencing instruments geared toward uses as simple as hour-long analyses of microbes and viruses to complex days-long analyses of human, plant, and animal DNA sequences. At the end of 2019, Illumina's management claimed more than 15,000 of its instruments were in use across the world.

Although the sequencing instruments are crucial, the exciting part of Illumina's business is its consumables (kits, reagents, and assays), which are specifically designed and sold for use with the sequencers. Consumables have higher profit margins, and their sales are growing much faster than revenues from the instruments themselves. Over the past three years, consumables have grown as a percentage of total revenue from 64% to 68%.

Exelixis is a small biotech company with one foundational drug that it is testing as a treatment for many different illnesses. Cabozantinib, which was approved for thyroid cancer in 2012, has been marketed as COMETRIQ for thyroid cancer and CABOMETYX for kidney cancer (renal cell carcinoma). Cabozantinib serves as the revenue workhorse for Exelixis as it partners with larger pharmaceutical companies to improve outcomes for cancer patients.

This cabozantinib-centric strategy was born from a failed phase 3 trial for prostate cancer in 2014, which led to massive layoffs and an 85% fall in the stock price from highs earlier that year. The stock eventually recovered, as management's investments in achieving indications for an already-approved drug brought new success.

In 2015, the company partnered with Genentech (of Roche Holdings) to win approval to treat certain forms of skin cancer. In 2016, management licensed the marketing rights for cabozantinib outside the U.S., Canada, and Japan to Ipsen. In 2017, CABOMETYX was approved as a first-line treatment for kidney cancer. This last indication was proven successful in 2018, when CABOMETYX became the top prescribed tyrosine kinase inhibitor (TKI) to treat advanced renal cell carcinoma.

The price of predictability

The range of possible outcomes for the companies over the next few years is striking. Illumina's large installed base of genome sequencers and the increasing reliance on its machines and consumables point to steady growth as far as investors can dream.

Exelixis' strategy of testing cabozantinib with many different partners to see what works might pay off -- and it might not. Even in the cases where management finds success, cancer medicines are quickly changing, and today's success may be tomorrow's "has-been" treatment.

While Illumina offers a much more predictable future, investors are paying a premium for that peace of mind. The price-to-earnings (P/E) ratio has remained between 40 and 80 over the past five years, and now sits at 69. Exelixis has a much more normal P/E of 24, close to the average P/E ratio of the S&P 500, which is currently about 23. 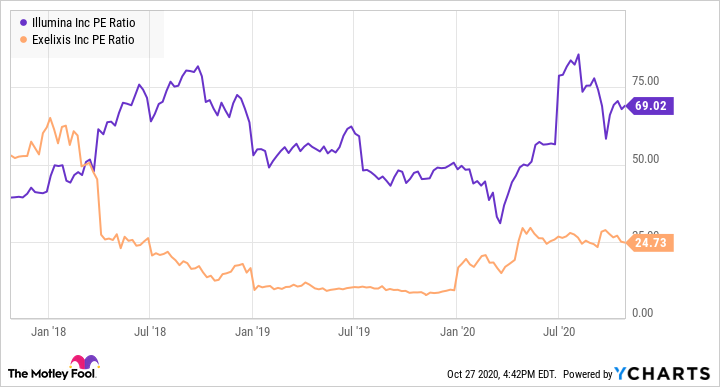 With the near-term future for Illumina more or less known (and priced into the stock), deciding between these two companies becomes a bet on Exelixis' prospects. The company lists more than 70 studies in its pipeline including more than 50 clinical trials. All but 13 are sponsored by development partners. The company and its partners are investigating treatments across 15 different types of cancer, including kidney, thyroid, liver, and prostate diseases. The sheer volume of work is impressive, if not a bit overwhelming.

Despite all the work in progress, the majority of Exelixis sales comes from its 2016 and 2017 approvals to treat kidney cancer, and the 2019 approval to treat liver cancer. Management has been able to produce free cash flow over the past few years because sales of these drugs have grown. As revenue approached $1 billion in 2019, the company generated $514 million in free cash flow, up more than 250% from $144 million in 2017. Another bright spot in 2019 was the first internally developed compound to reach a clinical study since 2009. This highlights the long reliance on cabozantinib, but offers continued hope for the future.

Comparing the prospects of Illumina and Exelixis stock isn't the mismatched knockout it first appeared to be. A large difference in valuation -- as well as Exelixis' dozens of treatment partnerships and more than 50 clinical trials that could produce revenue-generating drug combinations -- mean that investors willing to tolerate risk may find the stock worth purchasing. One recent success to note is the company's partnership with Bristol Myers Squibb (BMY -0.25%) The combination of Bristol Myers' Opdivo and CABOMETYX was found to reduce the risk of death from kidney cancer by 40%.

But despite its high valuation, Illumina stock looks like a winner to me. As Warren Buffett once said: "Rule No. 1: Never lose money. Rule No. 2: Never forget rule No. 1." With that mindset, my investment dollars are on Illumina and are likely to stay there for the next decade.