Macy's (NYSE:M) shares may look tempting after losing 61% since the beginning of the year. With the holidays ahead, we might expect a boost to sales -- and eventually to the stock price. But don't be fooled. The department store chain isn't out of the woods yet.

Prior to the coronavirus outbreak, Macy's was already struggling with problems such as declines in mall traffic and online competition. Post the global coronavirus outbreak, Macy's faced new problems, including temporary closure of stores and consumers' focus on stockpiling necessities, rather than shopping for clothing or jewelry. While the health crisis isn't over, stores have reopened and retailers are trying to adapt to today's customer. Eventually, we might bet on Macy's recovery. But don't jump in yet until these three things happen. 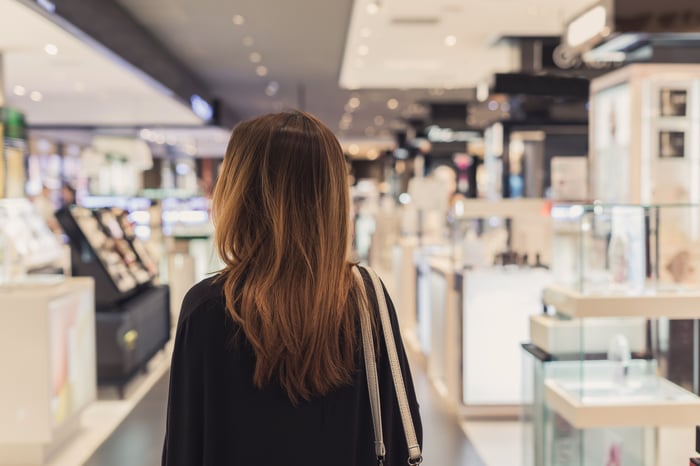 Macy's' flagship store in Manhattan's Herald Square, and even some of its stores in other big city locations, depend on tourism. In the company's second-quarter earnings report, it cited the drop in international tourism due to COVID-19 as one of the headwinds it continues to face.

For perspective, international tourist arrivals to the Americas dropped 55% in the first half of the year, according to the United Nations World Tourism Organization. That shouldn't be surprising since many countries restricted travel during that period as the coronavirus outbreak turned into a pandemic. And in keeping with lock-down restrictions, Macy's and other retailers temporarily closed stores. However, the resulting decline in travel in that period isn't the primary issue.

The bigger concern is that, as the health crisis continues to drag on and economies stall, international tourism isn't going to witness a rebound overnight. In fact, the UN report estimates that it would take two and a half to four years for international tourism to return to 2019 levels. This doesn't mean you should wait that long to buy Macy's shares, but rather, it's prudent to wait until we see at least a gradual increase in travel figures.

Digital growth continues beyond the pandemic

Macy's reported a 53% surge in digital sales in the second quarter compared with the year-earlier period. And e-commerce made up 54% of total sales. This gain in digital is positive. But we have to put it into perspective. This happened at a time when many communities continued to struggle with the coronavirus, and shoppers favored e-commerce to avoid contact with others.

Moving forward, it will be important to see whether digital gains can sustain the momentum. In a quarter or two, we should have an idea of how the company is faring. Macy's recently updated its three-year Polaris growth strategy, originally released right before the coronavirus pandemic. The company plans to speed up development of its digital business. It also aims to increase the business's profitability by finding ways to expand margins and optimizing how it spends marketing dollars, for example.

Along with this comes the strengthening of the omnichannel experience, essentially developing a seamless physical store-digital business. Macy's has created a centralized fulfillment system as part of this effort. Such a move should help customers get their orders in an efficient manner and eventually lower Macy's costs.

Speaking of costs, back in February, Macy's set a cost-savings target of $1.5 billion by 2022. The company recently revised that figure to $2.1 billion. Macy's made the move due to the current, more difficult environment. Macy's has financial resources as it launches its recovery plan: The company ended the second quarter with $1.4 billion in cash, and access to $3 billion under a credit facility.

But considering the trend in sales and earnings, the need for cost savings is clear. Same store sales slid more than 34% in the second quarter year over year. And the retailer reported a loss per share of 81 cents compared to earnings per share of 28 cents in the year-earlier period. But declines aren't just a result of COVID-19. Net income in 2019 fell to $564 million from more than $1 billion in the previous year.

Now, Macy's said it will control expenses so that savings can partially compensate for costs to ramp up the digital business and fund strategies to boost sales.

Investors should keep an eye on Macy's' efforts here, including elements such as inventory control. In the second quarter, Macy's reported some bright news: a 29% decrease in inventory compared with the year-earlier period. That allowed the chain to start the third quarter with a healthy sales-to-stock ratio.

You don't have to wait until 2022 to buy Macy's shares. But a quarter or two of cost-savings progress, along with movement in the right direction in digital, and some recovery in tourism may be signs to start betting on this retailer's recovery.