There are still many hurdles in the way of AstraZeneca's coronavirus vaccine candidate.

According to a recent poll by CNN, only one out of two Americans plans on getting a coronavirus vaccine once one is approved. And there are legitimate reasons to be skeptical about them. Before the pandemic, the fastest vaccine ever developed was the mumps vaccine, and that took four years. Meanwhile, the fact that we are rushing vaccines to the market in less than 12 months has many Americans worried about their quality and long-term safety profile, which ongoing clinical studies cannot yet evaluate.

Investors are arguably anxious about AstraZeneca (AZN 0.46%), after a series of unexplained adverse events in studies evaluating its messenger RNA (mRNA) COVID-19 vaccine. Are these safety concerns legitimate or overblown? 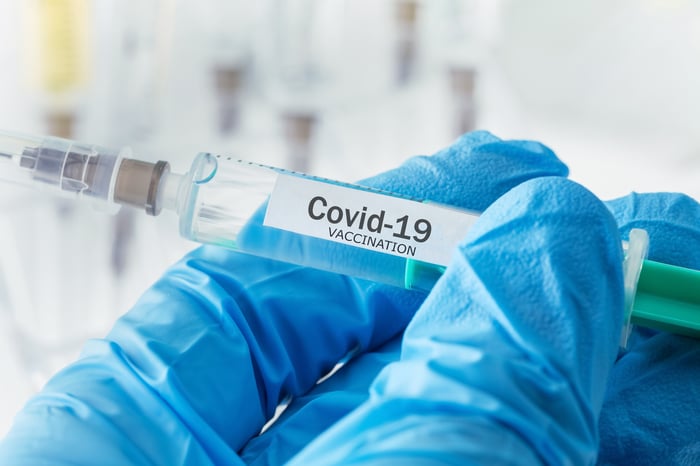 It has now been over a month since AstraZeneca halted its phase 3 coronavirus vaccine trials. First, there was an unexplained illness in a clinical trial participant that caused the study to pause in early September; second, a participant in Brazil died in the middle of the study on Oct. 21.

Although the news looks bad on the surface, investors shouldn't do a total about-face just yet. Since the clinical trial is so large -- with over 30,000 participants, it was almost inevitable that at least one participant would develop an illness during the study, regardless of whether or not the vaccine caused it. According to emerging reports, it appears that the deceased Brazilian volunteer did not receive any doses of the experimental vaccine, which should quell some safety fears.

In addition, Operation Warp Speed (OWS) chief advisor Moncef Slaoui said in an interview dated Oct. 21 that AstraZeneca's vaccine study would resume shortly. Late-stage data for the experimental vaccine is likely to be out by December.

AstraZeneca has one of the largest production capacities among coronavirus vaccine developers. Potential vaccine race winners such as Moderna (MRNA -1.76%) and Pfizer (PFE -0.63%) will likely manufacture between 1 billion to 1.3 billion doses of their vaccine per year after 2021 if they are approved. Meanwhile, by 2021, AstraZeneca expects to produce a whopping 2 billion doses per year of its vaccine contingent on clinical trial success. Assuming a price tag of $4 per dose, that's $8 billion per year in potential revenue.

A $8 billion market opportunity is quite significant, considering AstraZeneca's non-vaccine revenue should come in around $25 billion this year. In the first half of 2020, the company's revenue grew by 14% year over year due to $12.36 billion COVID-19 tailwinds that provided a surge in demand for its pharmaceutical products. Simultaneously, the company increased its adjusted earnings per share (EPS) to $2.01, up 26% from the first half of 2019.

In the same period, the company's new medicines, oncology therapies, cardiovascular, renal, and metabolic (CVRM) drugs, and respiratory and immunology (R&I) treatments saw revenue growth of 45%, 31%, 11%, and 7%, respectively. The best selling drugs during the period were the company's lung cancer therapy Tagrisso and its ovarian cancer drug Lynparza, which together brought $1 billion in new revenue.

Last year, the company reinvested more than $6 billion of its revenue into research and development (R&D) for new medicines. The result is an R&D spending margin of 25.7%, which would explain why AstraZeneca can still grow its sales by double-digit percentages while sporting a massive $134 billion market cap.

What's more, there are ample candidates lined up in AstraZeneca's pipeline to replace core products once they lose their patent protections. The company currently has 17 medicines in phase 3 clinical trials, with multiple data readouts anticipated within the next year in addition to data on its coronavirus vaccine candidate. Whether investors are waiting for that vaccine share price pop or planning to hold shares for the long term, investors interested in biotech have good reason feel confident about AstraZeneca's potential.