Friday, Oct. 30, was a scary day for the markets -- very appropriate for the day before Halloween. The tech-focused Nasdaq declined 2.45%, and the leading FAANG contingent fell even harder, with all major names declining more than 5%. That is, except one:

So, what's up with Alphabet, the parent company of Google? The search, YouTube, and Google cloud parent rose after it beat earnings Thursday night. But that probably wasn't the reason in and of itself, as Apple, Amazon, and Facebook also handily outstripped analyst expectations that same evening. So, how did Google defy its peers? 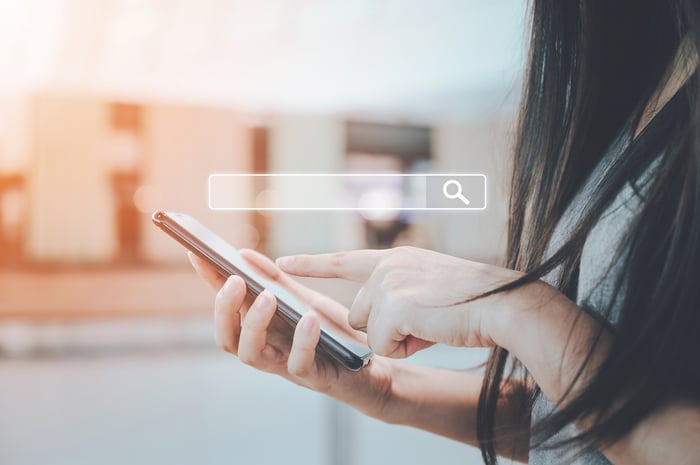 Google certainly had some catching up to do, as it has been the worst-performing of the FAANG stocks this year: 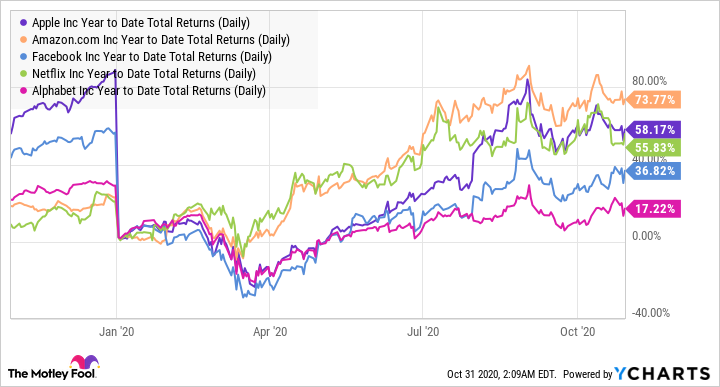 Alphabet is up "only" 17.2% -- still well ahead of the overall S&P 500's 4% gain, but also below its large-cap FAANG peers and the Nasdaq Composite overall.

Stay-at-home favorites such as Netflix and Amazon had seen their revenue boom this year, while Google's digital search business declined hard in the second quarter, causing overall revenue to fall 1.7%. Facebook's revenue held up much better throughout the first half of the year, as its advertisers skew more toward e-commerce and brand advertising, while Google search was hurt by its overexposure to travel and local businesses. Meanwhile, Apple's results were better than feared during quarantines, while investors bid up the stock in anticipation of its first 5G phone launch.

Add in an antitrust lawsuit against Google from the Department of Justice, and Alphabet was a clear laggard this year. As such, investors were perhaps more eager to lock in gains from the outperformers while giving Google the chance to catch up.

Reason No. 2: Alphabet beat by even more than the others did

Clearly, expectations were fairly low for Alphabet heading into its third quarter earnings release, but the company blew estimates away, arguably by more than its peers. Revenue grew 14% to $46.2 billion, beating analyst estimates by almost 8%, which is a pretty big beat for a normal revenue estimate. Operating margin came in at 24%, well ahead of the expected 19.8%, fueling earnings per share that beat expectations by a stunning 46%.

While Google's FAANG peers also beat expectations, none really turned themselves around as drastically as Alphabet, which went from a 1.7% year-over-year revenue decline to 14% year-over-year growth in just one quarter.

Facebook's revenue accelerated from 18% in Q2 to 22% in Q3, while Amazon posted a strong 37% revenue growth, a modest deceleration from last quarter's 40%.  Netflix beat revenue and profit expectations, but its revenue also decelerated from 24.9% in Q2 to 22.7% in Q3, and net additions of 2.2 million missed its own guidance of 2.5 million net adds.

Basically, while Google's peers posted good results, they were incrementally positive, while Google's headline metrics marked a more decisive turnaround as all of its business lines accelerated.

Reason No. 3: It's the only one reining in spending

Finally, perhaps the biggest difference between Google and its peers was Google's spending outlook. One could argue Facebook and Amazon posted revenue and earnings beats comparable to Google's; however, both Amazon and Facebook also guided to much bigger spending in the days to come, even amid an uncertain environment.

Facebook gave investors spending guidance all the way through 2021. Next year, Facebook projects $68 billion to $73 billion in spending, a 27%-36% increase over this year's projected range of $52 billion to $55 billion. At the same time, Facebook noted that new regulations and Apple's iOS 14 could limit the company's data collection, which may affect Facebook's targeting algorithm and therefore the ability to charge advertisers higher prices. So, with higher spending and questions around future revenue, Facebook sold off.

Amazon, for its part, did guide for strong 28%-38% revenue growth next quarter, but also for operating income to decline sequentially to between $1.0 billion and $4.5 billion, down from $6.2 billion in the third quarter. The decrease in profit is due to increased COVID-19 spending, along with significant capacity additions to fulfill demand, both in terms of new distribution centers, data centers, and employees.

While Netflix saw free cash flow turn positive this year, management now projects the company to go back into cash-burning mode as it ramps up original productions. Apple declined to give specific revenue guidance but did say that operating expenses would grow from $9.9 billion last quarter to $10.75 billion next quarter, a fairly big jump.

In contrast to these four peers, Alphabet noted that it decelerated headcount growth this year after the pandemic broke out, except cloud spending, which remains Google's highest priority. CFO Ruth Porat predicted a "further deceleration in the pace of headcount growth" in the fourth quarter, and lower capital expenditures in 2020 compared with 2019.

I happen to think that the FAANG stocks got a bad rap on Friday, but I was also happy to see Google have strong outperformance versus the group. It's something that was long overdue.