Few industries have been hit as hard this year as movie theaters. It's thus no surprise that AMC Entertainment (NYSE:AMC), the biggest theater operator in the country and the world, saw its shares spiral for much of October. Rising COVID-19 case counts over the course of the month caused movie theaters to again retreat.

AMC shares finished the month down 50%, according to data from S&P Global Market Intelligence. The company also acknowledged it is facing a financial crunch that could drive it into bankruptcy as early as the end of the year.

As you can see from the chart below, the stock spent most of October on a downward trend and then dove on Oct. 13 after the company issued an update and said bankruptcy was a possibility. 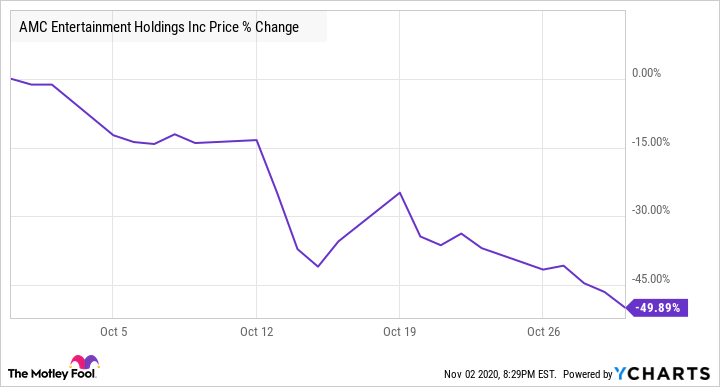 In the first week of October, AMC shares slipped after rival Cineworld, which owns No. 2 U.S. movie theater chain Regal, said it would close all of its theaters due to delayed studio releases and poor attendance upon reopening. Walt Disney also said it would release "Soul," its next Pixar movie, straight to Disney+ rather than in the theaters.

On Oct. 13, the stock began to tumble abruptly after the company released an update saying that since reopening, same-theater attendance had declined roughly 85% in the U.S. The company also said that its cash on hand would be depleted by the end of 2020 or early 2021, and that it would therefore need to raise money unless attendance rose past current expectations. Investors interpreted that note as a dire warning, and shares fell by nearly a third in just a three-day span.

To close out the month, the stock continued to slump as fears of another wave of infections shook the market and cast doubt on theaters reopening anytime soon.

AMC reported third-quarter earnings on Monday night. The stock rose slightly in after-hours trading even though results missed the mark. Revenue fell 91% to $119.5 million, and the company reported an adjusted loss of $5.70 per share.

Without an end to the pandemic, or significant drops in COVID-19 cases, it's hard to see AMC mounting a comeback. Unless a white knight investor comes along, bankruptcy looks likely for this ailing entertainment stock .