Shares of Nano-X Imaging (NASDAQ:NNOX) were gaining last month after the controversial radiology disruptor said early in the month that it would demonstrate its technology at a conference at the end of November. Investors seemed to take that news as a sign that the company's unproven technology is legitimate.

The stock finished the month up 17% as a result, according to data from S&P Global Market Intelligence. The chart below shows that the stock soared on that news early in the month and then slipped as enthusiasm over the stock faded. 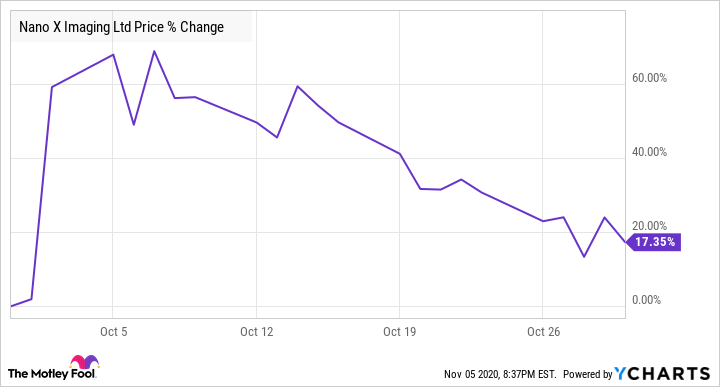 In just a few months on the public market, Nano-X has rocketed up and down. Growth stock investors have bought into the disruption story, while prominent short-sellers like Citron Research's Andrew Left, Muddy Waters' Carson Block, and Whitney Tilson have lined up against the stock, calling the company a fraud.

Nano-X announced on Oct. 1 that it would demonstrate its novel technology and medical imaging system at the Radiology Society of North America conference in Chicago from Nov. 29 to Dec. 5. The stock surged 56% on the news, as investors interpreted it as a sign that the technology does what the company claims it does.

Toward the end of the month, Nano-X signed an agreement with Ambra Health to facilitate the transfer of medical images, which gave the stock a brief pop on Oct. 29.

Nano-X has emerged as a battleground stock. The company says its technology can reduce the cost of medical imaging and vastly expand access to it by eliminating the need for expensive X-rays. However, the company has not yet generated any revenue, and only started operations last year.

In other words, Nano-X is more like an early stage biotech company than a typical medical device manufacturer. If the company's technology fulfills its promise, the stock certainly has a lot of upside potential, but with no revenue, it's easy to see why the shorts have lined up against it. If the product disappoints, the healthcare stock could go to zero.

Investors will want to keep an eye on the demonstration at the RSNA conference at the end of November as the stock is likely to swing on the response.