Abiomed (NASDAQ:ABMD) is a well known manufacturer of cardiac and circulatory support devices, including Impella heart pumps and the Breethe OXY-1 cardiopulmonary system. While many consumers -- and many of the company's own investors -- may go their whole lives without hearing of the company, if you have a heart attack or need heart surgery, there's a good chance that your doctors will use one of the medical device company's products at some point during your course of treatment.

The company managed to steadily grow and then maintain its revenue for years, but in 2020, its own health has started to take a turn. The coronavirus pandemic forced many patients to put off nonessential cardiac care and surgeries, which weighed down Abiomed's revenues. Meanwhile, there is rising competition in market for circulatory support devices that could spell an end to the company's long streak of expansion.

For investors, the question has become: Does Abiomed have what it takes to return to flourishing, or might its fortunes take an even more dramatic turn for the worse in the next few years? Part of the answer can be found in its recent history. 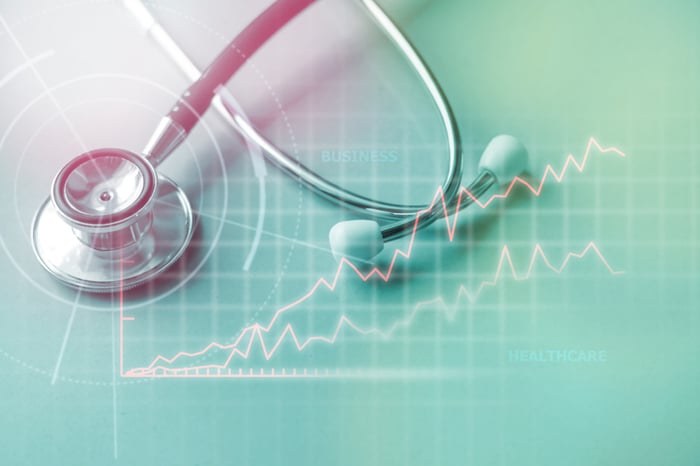 Abiomed's Impella heart pumps are designed to support a patient's circulation for short periods of time when their normal cardiac function is heavily impaired, such as during heart surgery. The company derived most of its $798.07 million in trailing 12-month revenue from its Impella devices, and it expects them to keep providing the lion's share of its top line for the foreseeable future. Thanks to steady research and development (R&D) efforts, it has successfully earned FDA approval for their use in new indications, thus increasing the size of its addressable market. In the long term, the company hopes to provide clinicians with products across the entire care chain of heart recovery and circulatory support.

Several factors may make healthcare sector investors look favorably upon Abiomed, including a profit margin approaching 20% and a negligible debt load of $12.12 million. It has plenty of cash on hand, and it isn't in the habit of issuing new stock in order to generate more of it.

Abiomed also recently secured an Emergency Use Authorization (EUA) from the FDA for its Impella heart pumps to be used for certain COVID-19 patients in critical condition. While that's unlikely to result in significant new revenues for the company given the relatively small population of eligible patients, it's still a positive sign of the device's foothold in hospital settings.

The case against Abiomed

Despite the company's strengths, there are a few things that investors should be concerned about.

First, its revenues and earnings growth lost a significant amount of momentum this year. While the company's latest earnings report suggests that growth is starting to accelerate again, it remains to be seen whether it will return to consistent expansion.

Second, its gross margins have been slowly shrinking over the last four years while R&D expenditures have steadily risen. Both of these may be the natural results of mounting competition within its niche. In particular, Abiomed sees Abbott Laboratories (NYSE:ABT) and Medtronic (NYSE:MDT) as threats that are likely to become more acute.

But Abiomed's growing R&D costs are more likely to be driven by another problem: a scarcity of clinical trial participants. Only a small fraction of patients getting heart surgery are eligible to participate in the company's studies. In fact, of the last 10 clinical trials that the company tried to initiate for its Impella units, seven failed to enroll enough volunteers, and the trials became wastes of valuable resources. Given that the trials frequently seek to test Abiomed's products in the context of someone having a heart attack, it's unlikely that it will be able to overcome this issue without increasing its studies' integration with a large number of hospital networks.

Despite the challenges ahead, I still think that Abiomed will continue to outperform the market in the long term. While its recent struggles during the pandemic and its clinical trial problems aren't negligible, both can subside over time. Similarly, while competition may eventually drive down its profit margins, it's important to note that no single competitor has remotely penetrated the entire market for cardiac support devices.

But if I were a new investor, I would want to see clearer signs that this year's revenue dip is reversing before making an investment in Abiomed. Keep an eye out for the company's next earnings report, and act accordingly.

Is Abiomed Stock a Buy? @themotleyfool #stocks $ABMD $ABT $MDT Next Article
Current