Shares of Automatic Data Processing (NASDAQ:ADP) rose 13.2% in October, according to data from S&P Global Market Intelligence. The stock climbed thanks to momentum for the broader human resources software industry and better-than-expected quarterly results at the end of the month. 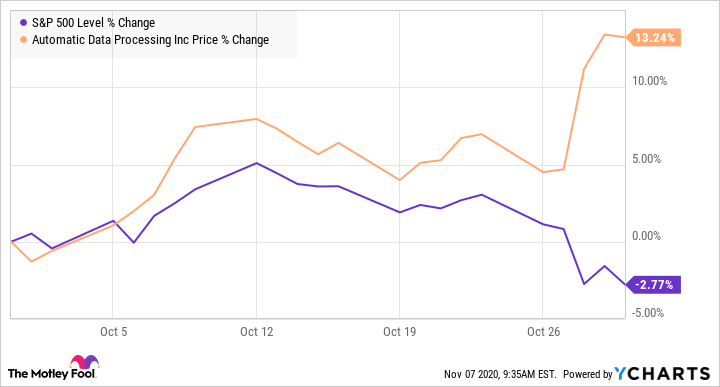 The Labor Department published jobs and economic data early last month, and the report showed that 660,000 non-farm jobs had been added in September. This figure came in below the Dow Jones economist target for 800,000 non-farm job additions in the month, but the data still generally indicated that the economy was continuing to recover from coronavirus-related challenges.

ADP published first quarter results on Oct. 28, delivering sales and earnings for the period that came in ahead of the market's expectations. The company posted non-GAAP (adjusted) earnings per share of $1.41 on revenue of $3.47 billion. The average analyst estimate had called for per-share earnings of $0.98 on revenue of $3.27 billion.

ADP stock has continued to climb in November's trading, although its gains have lagged those of the S&P 500 index. The software company's share price is up roughly 3% in the month so far. 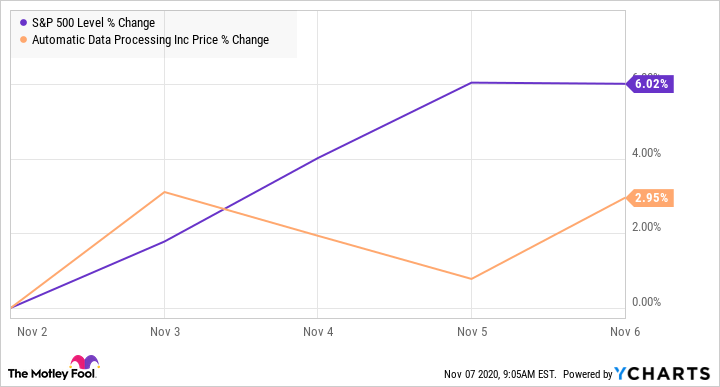 ADP expects that sales for the current fiscal year will come in somewhere between 1% lower and 1% higher than last year, and its adjusted EBIT margin is projected to decline between 100 and 150 basis points. Adjusted earnings per share are expected to be between 3% and 7% lower on an annual basis.

ADP has a market capitalization of roughly $71.3 billion and trades at approximately 30 times this year's expected earnings. The stock also has a dividend yield of 2.2%, and the company has increased its annual payout for 44 years running.