Shares of VMware (NYSE:VMW) slipped 10.4% in October, according to data from S&P Global Market Intelligence. The stock fell in conjunction with sell-offs for the broader market following a surge of new coronavirus cases and relatively weak performance for some technology giants. 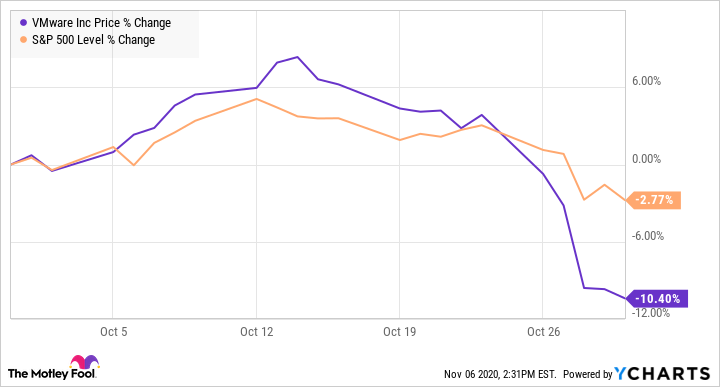 VMware, which is a majority-owned subsidiary of Dell (NYSE:DELL), saw its stock track roughly in line with the broader market's movement for much of October. The company's share price pulled back in conjunction with the sell-off that hit the technology sector late in the month, and it may have seen pressured due to underwhelming guidance from industry-shaping tech companies. 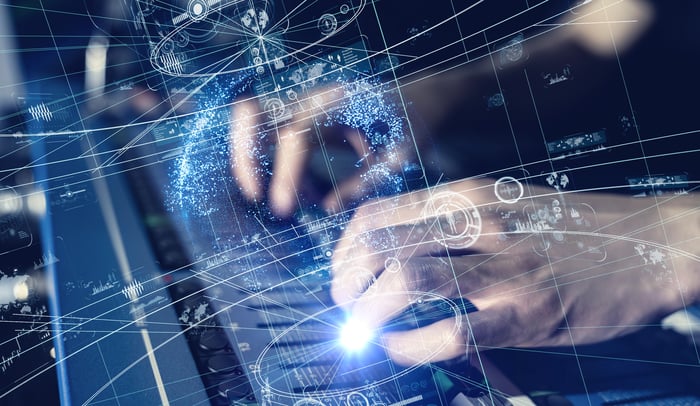 There wasn't much business-specific news for VMware in October, but investors appear to have adopted a more cautious stance on tech stocks as some major players weighed in with forward guidance late in the month. Microsoft reported first quarter results on Oct. 27, and the company's report prompted a reassessment in tech sector outlook despite arriving with sales and earnings beat for the period. Management guided for second quarter sales that fell short of the market's target.

Microsoft's relatively soft guidance followed relatively weak guidance that Intel issued when it reported quarterly earnings roughly a weak earlier, and the more cautious outlook from large tech players had ripple effects throughout the tech sector and broader market. The sell-off hit VMware, and its stock closed the month down double digits, but shares have quickly bounced back this month.

VMware stock has rebounded amid momentum for the broader market early in November's trading. The company's share price is up roughly 10.4% in the month so far. 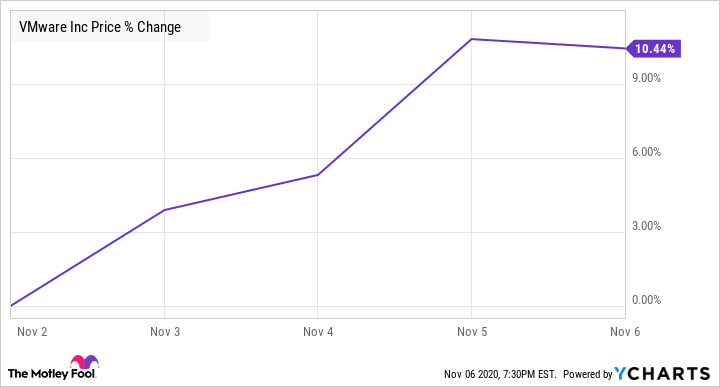 For the third quarter, VMware is guiding for revenue of roughly $2.8 billion, up about 5.4% year over year. Subscription, SaaS, and licensed revenue is projected to be $1.265 billion, up 5.6% year over year, with subscription and SaaS sales accounting for roughly half of the category total.

For the full-year period, management is guiding for sales of $11.6 billion, up 7% annually. Combined subscription, SaaS, and licensed revenue is expected to come in at $5.5 billion, an increase of 9% year over year, with subscription and SaaS accounting for over 45% of that revenue. Non-GAAP (adjusted) earnings per share for the year are projected to be $6.62 -- up roughly 6% annually.

VMware has a market capitalization of $59 billion and trades at roughly 21 times this year's expected earnings.