Roku (NASDAQ:ROKU) reported third-quarter earnings on Nov. 5 that blew away analysts' expectations and sent a red-hot stock soaring even higher.

The streaming video company produced impressive 73% year-over-year revenue growth, and it surprised the market with a $12 million quarterly profit. Let's take a closer look at the report, what is driving Roku's success, and if there's more to come in the future. 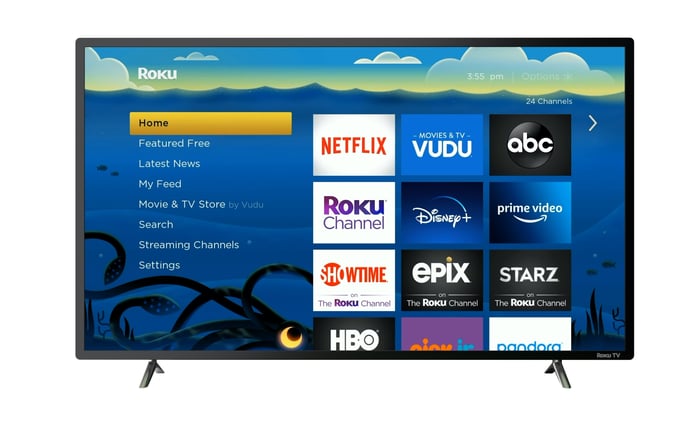 Revenue not only topped the $367.8 million consensus, but it was the highest year-over-year quarterly growth since the company went public in 2017.

Roku breaks revenue into two categories -- player and platform. Player revenue includes devices Roku sells or licensing agreements with manufacturers that use the company's operating system for streaming online video on your TV. Player unit sales grew 57% year over year, driving a 62% increase in revenue for the segment.

Platform revenue comes from monetizing Roku's user base through advertising, subscriptions to premium services, or transactions like movie purchases. Platform revenue, which grew 78%, has higher margins and accounted for more than two-thirds of the top line. That helped total gross profit rise 81% year over year. In short, revenue grew at a torrid pace, and profits grew even faster.

Roku's strategy is to attract users to its platform and then monetize them. Here are a few relevant metrics:

Roku account growth in the third quarter proved to be a continuation of an important trend. With its huge user base -- Roku is the industry leader, according to eMarketer -- the company has an advantage in a competitive environment that includes blue-chip competition like Amazon's Fire TV, Apple TV, and Google's Chromecast.

Content publishers want to be on the popular Roku platform, and with more content, the company retains and attracts new viewers. Advertisers want to reach that large audience, which produces revenue for both Roku and its content providers -- a virtuous cycle.

Active accounts have increased by 9.1 million in the first nine months of 2020, which nearly matches the gains from all of 2019 (9.8 million). Not only is the audience growing, viewers are spending an increasing amount of time watching content on the platform as streaming hours jumped 54% during the quarter.

Roku wants more advertising revenue, and that effort has been helped by its acquisition of Dataxu in Nov. 2019. Roku rebranded the purchase as OneView, a platform that allows marketers to place ads programmatically instead of the traditional method of working with advertising sales representatives (Roku sells with ad reps too).

There are numerous ad technology platforms available to marketers, but management says Roku's first-party user data attracts advertisers who can use that information to precisely target consumers on platform and off it -- whether on mobile, desktop, or other streaming TV services.

The Roku Channel, which includes free content from hundreds of publishers, also drove growth, reaching an estimated 54 million people. It grew more than twice as fast as the overall platform for streaming hours and active account reach.

Monetized video ad impressions increased nearly 90% year over year, and that growth came while some businesses reduced marketing spending as they navigated the coronavirus pandemic. Management said more marketers are beginning to follow the audience from traditional TV platforms to streaming. And those marketers are liking what they find: 97% of TV advertisers who spent at least $1 million with Roku in the third quarter of 2019 continued to spend in the latest quarter, the company reported.

Is there more growth ahead? 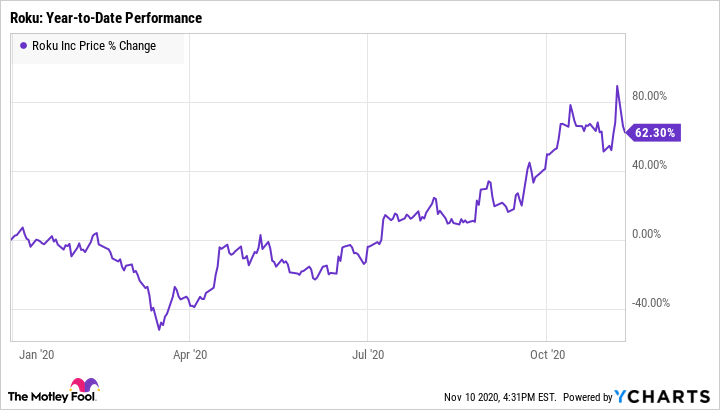 As you can see in the chart above, Roku shares have surged in 2020. That raises a key question: Is it too late to invest in this high-growth stock? I don't think so.

While Roku's results undoubtedly got a boost as people were shut in due to the coronavirus, active accounts had been growing before the pandemic. The company has benefited from the long-term trend of consumers leaving traditional TV for streaming platforms. eMarketer estimates about 7.5% of customers with cable, satellite, or telecom packages will cancel those subscriptions this year. That's a record rate of cancellations in a year, and more are forecast in future years.

Marketers' behavior is also changing. Roku founder and CEO Anthony Wood said in the earnings call that the "vast majority" of marketers' TV spending remains on traditional television. However, "one of the interesting things in the quarter was the fact that advertisers are increasingly seeing streaming as something they need to start allocating a bigger portion of their budgets toward," he said. "There's still a lot of opportunity, because of course, all those ads are going to switch to streaming eventually."

Roku shares could hit periodic bumps given the stock trades at 18 times sales, a valuation that requires this strong growth to continue. However, for long-term investors who can handle some volatility along the way, this company appears perfectly positioned to benefit from the growth of streaming TV.