Compared to other sectors of the market, stocks in the healthcare industry have performed remarkably well this year. Many healthcare stocks have mirrored or surpassed the gains of the S&P 500 amid the market's recovery following the March crash. Given the vital products and services that companies in the healthcare industry provide, from life-saving medications and medical devices to insurance and potential vaccines, it's not surprising that a number of stocks in this sector have remained recession and volatility-proof.

If you're worried about another market crash and thinking about beefing up your portfolio in November, these are five stocks worthy of your consideration. Let's dive right in. 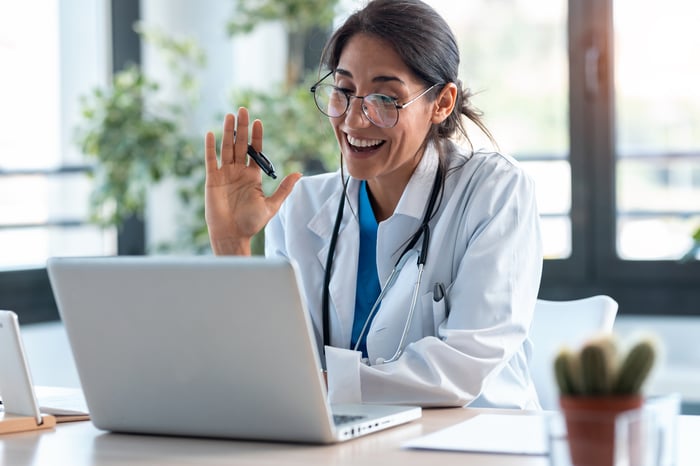 A leader in the ongoing telehealth revolution, Teladoc (NYSE:TDOC) has gained 116% year to date. Teladoc was breaking records well before the pandemic -- the company reported 32% year-over-year revenue growth in 2019 while growing visits on its platform by more than 50%.

The company's merger with applied health signals leader Livongo Health, which was completed on Oct. 30, will be a game-changer. When Teladoc announced the merger in August, management reported that the combined companies would generate pro forma revenue of more than $1 billion in 2020 alone. Management had previously projected in the company's Q1 earnings report full-year revenue between $800 million and $825 million. Management also forecasted that the merger would produce pro forma adjusted earnings before interest, taxes, depreciation, and amortization (EBITDA) equivalent to a $120 million.

In the third quarter, which ended on Sep. 30, the company reported 109% revenue growth year over year, along with a 206% increase in patient visits on its platform. The company's third-quarter gross margin totaled 63.3%. Management expects the company to report between $294 million and $304 million in revenue for the fourth quarter of 2020. Very few companies have been able to boast about double-digit growth amid the pandemic, much less triple-digit growth, but Teladoc has managed to accomplish the impossible this year.

Shares of continuous glucose monitoring (CGM) device maker Dexcom (NASDAQ:DXCM) are up almost 60% from January. The nature of Dexcom's business and the high demand for its products have enabled it to thrive during the pandemic with double-digit revenue growth. The majority of diabetics who require CGM devices have been diagnosed with type 1 diabetes. The American Diabetes Association reported that as of 2018, roughly 1.6 million individuals were living with the disease.

The healthcare stock has had an exceptional few quarters with consistent year-over-year revenue growth -- 44% in the first quarter, 34% in the second, and 26% in the third. During the third quarter ending on Sep. 30, the company's revenues in the U.S. alone burgeoned by a robust 29%. Dexcom also reported exceptional third-quarter gross profits equivalent to 68% of its total sales for the period. Management has said that it expects the company's full-year 2020 revenues to grow by 29% from 2019 and total roughly $1.9 billion.

Like the previous two picks on this list, Becton, Dickinson (NYSE:BDX) serves a very specific niche of the healthcare field. The company develops and sells medical devices and reagents.

During the final fiscal quarter of 2020, which closed on Sep. 30, Becton, Dickinson's revenues increased 4.4% year over year to $4.8 billion. However, the company reported $17.1 billion in revenue for the full fiscal year 2020, a 1% year-over-year decline from 2019. Sales of Becton, Dickinson's diagnostic COVID-19 tests, which include a 15-minute rapid detection test and two real-time reverse transcription polymerase chain reaction (rRT-PCR) tests, did help to offset this revenue decline to a certain extent. During the fourth quarter alone, sales of the company's COVID-19 tests totaled $440 million.

Becton, Dickinson pays a modest dividend that currently yields about 1.3%. Despite mixed financial results in fiscal 2020, the company's strong portfolio of core products should help it to recover from these near-term headwinds. Given that the stock is down approximately 11% compared to its January trading price, now may be an excellent time to buy this stock at a discount. 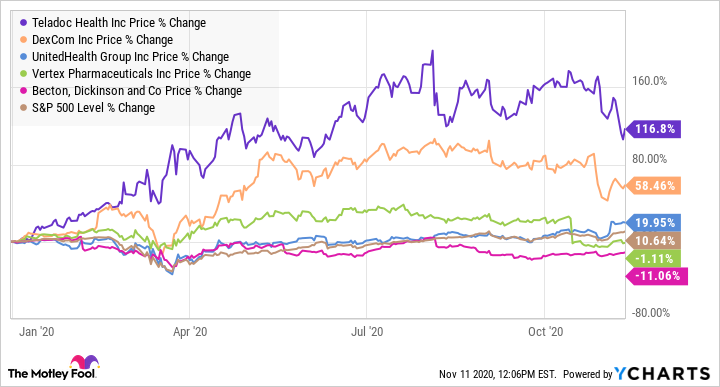 Shares of health insurance stock UnitedHealth Group (NYSE:UNH) have soared by more than 19% year to date. The stock is also a good choice for investors seeking dividend income -- it pays a nice yield of 1.4%.

UnitedHealth Group impressed investors when it released its third-quarter earnings on Oct. 14 for the three-month period ending on Sep. 30. During Q3, the company boosted its revenues by 8% year over year, part of which was attributable to the 21% growth in revenues from its Optum division. Adjusted earnings per share (EPS) dropped 10% during the quarter, indicating a drop in the company's overall net earnings, although management noted that "care patterns disrupted by the pandemic moved closer to normal levels." The company anticipates reporting adjusted EPS in the range of $16.50 to $16.75 for the full-year 2020.

The company had previously demonstrated the strength of its core businesses during the second quarter (ending on June 30), in which it reported revenues up by a whopping $1.5 billion. UnitedHealth Group was able to avoid extreme financial fallout from the COVID-19 pandemic due to "deferred care in the risk-based businesses," the positive effect of which carried over into the most recent quarter.

Analysts also seem confident in UnitedHealth Group's future growth prospects, projecting that the company will increase its earnings by 13% per year over the next five years.

A market leader in cystic fibrosis (CF) medications, Vertex Pharmaceuticals (NASDAQ:VRTX) has stayed the course this year despite broader market volatility. The company currently has four approved products -- Symdeko, Trikafta, Orkambi, and Kalydeco -- all of which treat CF. When the U.S. Food and Drug Administration (FDA) approved Trikafta last October, it was hailed as a "new breakthrough therapy" and "the first triple combination therapy available to treat patients with the most common CF mutation."

Vertex Pharmaceuticals has a promising product pipeline of therapies, including candidates for the treatment of CF and sickle cell disease. The company also recently entered into a new partnership with vaccine-maker Moderna (NASDAQ:MRNA) to develop gene-editing therapy delivery systems for CF. Given its place at the forefront of the CF market, Vertex Pharmaceuticals is well-positioned for future, continued growth.