Starting in early 2021, plant-based meat company Beyond Meat (NASDAQ:BYND) will release its Beyond Burger made with new recipes, according to a press release from the company on Monday. Until now, all Beyond Burger had been the same. But next year there will be two options: One will have 35% less saturated fat than 80/20 ground beef, and the other will have 55% less saturated fat.

This isn't the first time Beyond Meat has changed its burger recipe. In June 2019, the company launched an updated version that caused the product to change color as it cooked, just like real beef. And it also mimicked marbling, allowing the patties to cook more like a real burger. The previous version also included mung beans, which will be removed from the upcoming versions. 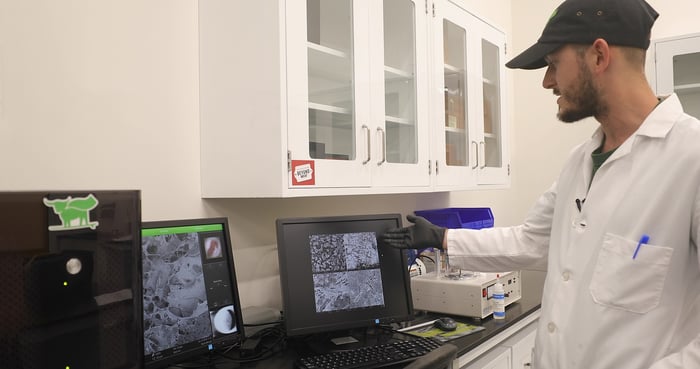 A Beyond Meat employee examines meat under a microscope. Image source: Beyond Meat.

According to Yahoo! Finance, these new versions will be called Beyond 35 and Beyond 55, representing the lower saturated fat content in the products. CEO Ethan Brown often talks about removing barriers to the adoption of plant-based meats, and some consumers question whether Beyond Burger is better for you than traditional beef. By lowering the saturated fat content, the company will likely remove that mental barrier for some.

Another hurdle for Beyond Meat to climb is the price gap between traditional animal protein and plant-based alternatives. About two years ago, Brown set a five-year goal for his company to undercut the price of animal protein in at least one category. It's getting close with its Beyond Burger. If it can ever become cheaper than the real thing, it may spur revenue growth as consumers find it cost effective.