Hindsight is always 20/20, but take a trip in a time machine with me. Let's go back to March 16 of this year. You have an extra $10,000 in your pocket. The world is intensely focused on a major pandemic. The stock market is crashing, including one stock you've had your eye on: home goods e-commerce company Wayfair (NYSE:W). You put the entire sum in the stock.

Just a little over five months later, on Aug. 26, how much do you think your investment is worth? The correct answer: over $145,000! To say that Wayfair deserves consideration as 2020's top growth stock investment would be an understatement.

But I'm cherry-picking this data -- and doing so beyond the level of amusement can be a dangerous exercise. It focuses far too much on short-termism and encourages both hindsight bias and fear of missing out, both of which are dangerous to investors.

As such, for long-term investors, there are more important things to focus on than absolute returns. One of those metrics is sorely underappreciated by many -- which is why I think it deserves some extra attention. 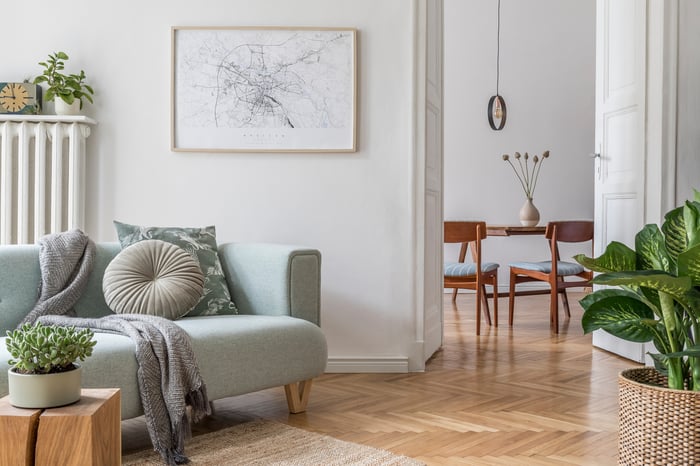 Before we get to that metric, I think it's vitally important to at least cover how Wayfair fared on the headline numbers.

Data source: Wayfair. N/A = Not applicable due to negative figures for 2019.

By all accounts, these are stellar results. Instead of a recession forcing many people to give up furniture buying (what drove the stock down so much in March), the coronavirus-related time at home encouraged many to buy furniture. The company's profits and free cash flow both boomed in response.

Wayfair posted a few other variables that, while not the important one I'm referencing, are worth considering.

Obviously, with both customers and orders growing so much, its not hard to understand why the stock has been doing so well.

Why investors have been wary

Before moving forward, a confession: I was once a Wayfair shareholder, but sold out quite a while ago. My reasons for doing so demonstrate the two key factors that have led many investors to be wary.

The first was a simple lack of profitability. Wayfair has been spending hand-over-fist for over five years to build out a fulfillment network that could deliver huge goods like furniture in record time. That obviously costs a bundle. The impetus for that move (beyond just trying to do right by their customers) is the fact that Amazon already has an enormous fulfillment network. But while Amazon's network is good at shipping small to medium packages, Wayfair wanted to be the leader in bulk packages.

That has continuously led to great sales growth coupled with losses that only seemed to multiply. With the most recent quarter, however, Wayfair has clearly demonstrated that it can be profitable.

But that doesn't allay what was my second, and more important, concern: the difficulty in discerning a moat, or sustainable competitive advantage. "Sure, Wayfair is growing fast," I thought. "But once others, namely Amazon, see this growth, they'll steal it away by offering the same thing for less." To my eyes, the company's reliance on brand value simply wasn't enough to persuade me to keep my shares.

Thus far, I've been proved wrong. Why do I say that? The number of orders being placed by repeat customers is absolutely booming. Case in point: During the third quarter, 11.4 million orders were placed (over 70% of the total) by customers who had already made at least one order on the site. That's a whopping 85% more repeat orders (6.2 million) than the company got in the year-ago quarter.

That tells me two things:

Bottom line: This company is becoming a force to be reckoned with. I no longer believes it even makes sense for Amazon to try to make serious inroads in competing in the broad furniture category. And it would almost be prohibitively expensive for a start-up to spend the money trying to match Wayfair's fulfillment capacities at this point.

Take a look at Wayfair

I'm not regretful over missing out on the Wayfair gains. That happens to every investor. I will say that it's a pleasant surprise to see the company (and its Foolish shareholders) doing so well. It's enough to land the company on my watch list. I believe it deserves a place on yours as well.