American business magnate John D. Rockefeller once said, "Do you know the only thing that gives me pleasure? It's to see my dividends coming in." While most of us have more happiness in our lives than that, investors in general do love dividend stocks, and with good reason. Dividends are tangible evidence of the returns you've achieved by investing your hard-earned money in a company you believe in.

Dividend-seeking investors often prefer companies that have faithfully raised their payouts on a quarterly or annual basis for an extended period. The crème de la crème of dividend stocks are called Dividend Aristocrats -- companies that have raised their dividend every year for at least 25 years in a row. The following three stocks are veteran members of the Dividend Aristocrat club, and could provide a dependable source of growth to your portfolio over the next five, 10, or 20 years. 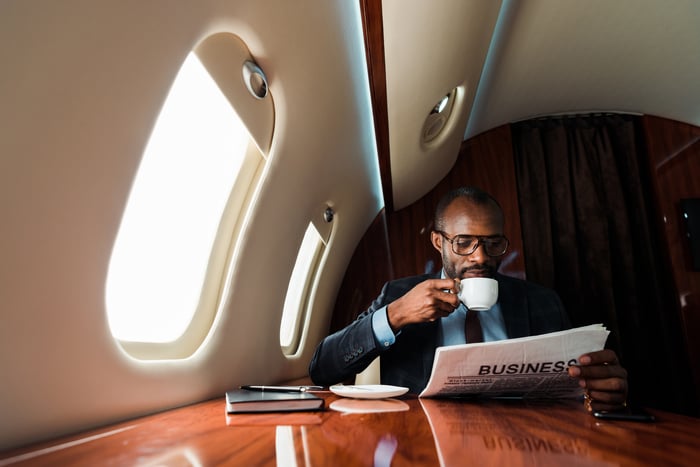 With nearly two centuries in business under its belt, Procter & Gamble (NYSE:PG) has survived many of the greatest economic calamities of the modern age. The company has been paying a dividend for 130 years, and has raised its dividend every year for 64 years in a row.

Procter & Gamble, which is one of Warren Buffett's longest-held stocks, boasts a collection of subsidiaries that few can rival. With names like Cascade, Bounce, Febreze, Dawn, Crest, Comet, and Swiffer included in the consumer goods company's 65 brands, the powerhouse was all set for continued success when the recession hit. During the 2020 fiscal year, which concluded on June 30, sales were up 5% year over year to $71 billion, with adjusted free cash flow productivity of 114%. (The company defines this metric as "the ratio of free cash flow to net earnings excluding the transitional impact of U.S. Tax Reform and the loss on early debt extinguishment.")

The first quarter of fiscal 2021 ending on Sept. 30 showed stellar growth for Procter & Gamble, with sales of $19 billion representing a 9% increase from the prior-year period. Sales were also up on a year-over-year basis across all of the company's key divisions: beauty (7%), grooming (6%), healthcare (12%), fabric and home care (14%), and baby, feminine, and family care (4%). Management recently increased its guidance for fiscal 2021, expecting to achieve up to 4% sales growth from fiscal 2020.

Coca-Cola (NYSE:KO) has raised its dividend on an annual basis for 57 consecutive years. Its 3% yield is well above the payout of the average stock on the S&P 500, which is around 2%.

Coca-Cola's most recent earnings report, for the third quarter ending Sept. 25, showed a 9% year-over-year decline in net revenue and an 8% decrease in operating income, with global unit case volume down by 4%. These less-than-stellar figures were actually an improvement from the company's second-quarter performance, which included a 28% decrease in net revenue, a 34% decrease in operating income, and a 16% drop in global unit case volume.

The company is working hard to sharpen its product offerings and gain a more competitive edge. Management intends to hone the company's current portfolio of over 500 brands down to 200, with beverages like Tab and Zico eventually being eliminated altogether. At the same time, Coca-Cola is launching new beverages, such as its Topo Chico Hard Seltzer, which hit the market last quarter.

The company does still have substantial debt to whittle down, with $39.5 billion in long-term liabilities at the close of the last quarter, but its decent cash position of $11.4 billion and total assets of $97.2 billion help to steady its balance sheet. And while a full rally from the negative financial effects of the coronavirus pandemic may be gradual, Coca-Cola's recent quarter-over-quarter improvement shows that it's already making strides toward recovery.

Johnson & Johnson's (NYSE:JNJ) leadership in the ongoing coronavirus vaccine race is what has caught many investors' attention lately, but its dividend should gather notice, too. The company, which has been in business since 1886, has boosted its dividend for 57 consecutive years, a feat few other companies can claim.

Investors are watching the healthcare stock's COVID-19 vaccine candidate closely, especially because it is one of the few vaccines in development that requires just one dose per schedule. The potential vaccine is being developed and studied in a double-blind, placebo-controlled trial of up to 60,000 adults worldwide by Johnson & Johnson's subsidiary Janssen Pharmaceuticals. Johnson & Johnson reportedly plans to test the vaccine on children between the ages of 12 and 18 in the near future.

While an adverse medical event experienced by one of the participants during the ongoing phase 3 trial forced Johnson & Johnson to halt the study temporarily last month, the company released a statement Oct. 23 stating it would be starting trial recruitment again in the U.S. and launched a second global phase 3 study testing participants on a two-dose regimen on Nov. 15.

A successful vaccine would not only be a feather in Johnson & Johnson's cap, but could also add billions of dollars of additional revenue into its financial picture. Johnson & Johnson's first-quarter results reflected only a minimal negative effect from the pandemic, with 3.3% year-over-year (YOY) sales growth, although there was a sharp 11% decline in sales in the second quarter. However, the company regained solid financial footing in the third quarter, with sales up 1.7% YOY. Johnson & Johnson has several blockbusters in its stable, including psoriasis medicines Stelara and Tremfya and multiple myeloma drug Darzalex, all of which have been vital sources of revenue growth for the company this year and helped it amass $21.1 billion in third-quarter sales.

Johnson & Johnson also boosted third-quarter earnings per share (EPS) by 101.5%, which is great news for investors since EPS growth directly correlates with the extent to which a company can boost its dividend.  The short term may present some economic challenges for Johnson & Johnson, but its portfolio and pipeline contain all the ingredients necessary for continued long-term growth. The success of its COVID-19 vaccine would just be icing on the cake.