It may not be as much as you expect.

Social Security benefits are an important source of retirement income, but they can't be your sole source. That's because they aren't designed to replace enough of your pre-retirement income to maintain your standard of living.

The rule of thumb is that Social Security benefits replace around 40% of pre-retirement income. But that's not very accurate because they don't replace the same amount of income for people across all income levels. In fact, they replace a far larger percentage for lower- and middle-income workers than for high earners. It's important to understand just how much of your pre-retirement wages Social Security benefits will replace so you know how much you need to supplement them.

How much pre-retirement income does Social Security replace?

The chart below shows the amount of a career-average wage that you could expect Social Security to replace if you are a 65-year-old retiree in 2020, based on whether you have a low, middle, or high income or you earned up to the taxable maximum. That maximum is because each year there's an earnings threshold above which Social Security taxes are no longer collected; any earnings above that threshold don't count toward determining your average benefits over your career. 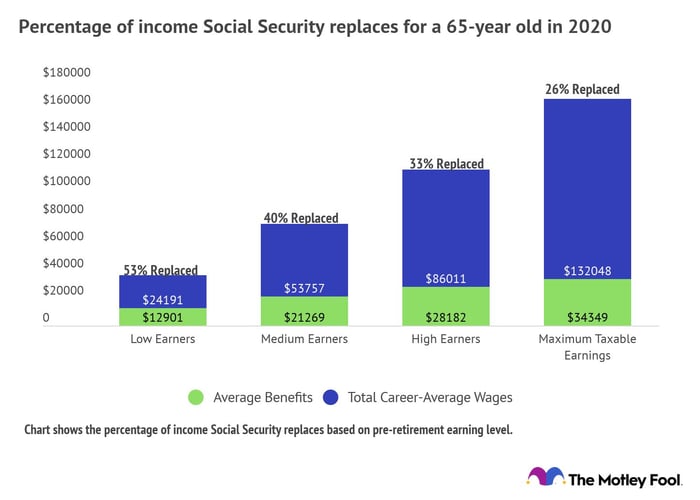 Those who pay the maximum in Social Security taxes will get benefits equaling an even smaller percentage of their pre-retirement income. In fact, although they'll get benefits to replace just over a quarter of the wages they paid Social Security tax on, there's a good chance that many who had the maximum taxable earnings actually earned more money than the amount they were taxed on. For them, benefits will replace an even smaller amount of their total income.

So why do lower-income Americans get a larger percentage of their pre-retirement income replaced? Simple: The Social Security benefits formula is progressive. It replaces 90% of income up to a first "bend point," 32% between a first and second bend point, and 15% above the second bend point. Each bend point is an income threshold. The more income you have above the bend points, the smaller the percentage of your total income will be replaced.

What's really important to note on this chart is that no matter your income, benefits are not going to replace more than around 53% of your pre-retirement earnings -- and it could be much less. That's a big problem if you're counting on Social Security as a sole source of support. Most experts advise replacing at least 70% to 80% of what you were earning so you can maintain the same quality of life in retirement, and some seniors actually end up spending more post-retirement than they did while working.

You can't survive comfortably on 53% or less of what you made before retiring, so you need supplementary savings. Once you figure out the amount of your pre-retirement income you can reasonably expect your benefits to replace, you can set savings goals to ensure your investments make up the shortfall.