One of the first casualties in a financial crisis is mergers and acquisitions activity, especially transactions where the target company is being bought for cash. One acquisition from early February involving retail real estate investment trust (REIT) giant Simon Property Group (NYSE:SPG) agreeing to buy Taubman Centers (NYSE:TCO) is a prime example of this phenomenon. Just five short weeks after the deal was announced, the economy hit a brick wall related to the coronavirus pandemic as malls were shut down on orders from various government agencies, and millions in the U.S. were thrown out of work.

What has happened since February with this deal shows the difficulty of executing a merger during an economic crisis and what often ends up happening as a result of the uncertainty, including news this week of some big changes to the deal. 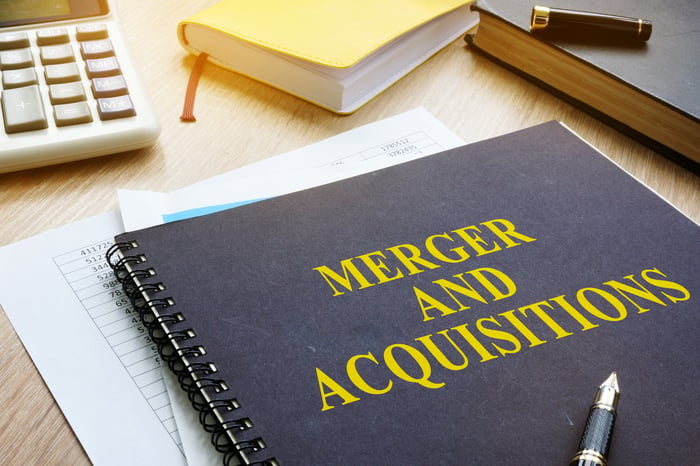 In early February, Simon agreed to purchase 80% of the shopping center REIT Taubman Centers for $52.50 in cash, which was a 51% premium to Taubman's pre-deal stock price. It was a deal negotiated in better times, as the economy was roaring and consumers were spending. Once COVID-19 shutdowns began, all of that economic activity ground to a halt, and Simon tried to get out of the deal.

Terminating a merger is easier said than done. A merger agreement involves a signed contract, and Taubman sued Simon claiming breach of contract and asked for a court to order specific performance.

Simon's argument for breaking the deal rested on the "material adverse effect" clause in the agreement, which said that Simon could terminate the deal if something bad happened to Taubman, provided that it wasn't something that hit the industry as a whole. Clearly, COVID-19 hit the entire sector, so Simon's argument was going to be tough to justify.

In the end, these situations typically end up with a renegotiated deal, and that is what happened here. On Monday, Nov. 16, just as the dispute was set to go to trial, Simon and Taubman announced a new transaction where Simon would buy Taubman for $43 per share.

Earnings are down for both companies

Both companies recently reported third-quarter earnings. Taubman reported funds from operations (FFO) declined 56% from the third quarter in 2019. Comparable center net operating income declined 18% year over year in the third quarter. Simon reported that funds from operations declined 33%, while comparable net operating income fell 14%. In July, Simon cut its dividend from $2.10 to $1.30 per share. Taubman suspended its dividend and is not permitted to pay any more dividends for the pendency of the transaction.

Is it still a good deal?

Is the deal still good for Simon? Not necessarily. Granted, Simon has been able to reduce the price paid by about 19%; however, Taubman's trailing 12-month funds from operations is about $210 million, compared to $309 million when the deal was initially negotiated. By the time the transaction is completed, it should look even worse since there is little chance the all-important fourth quarter will be anywhere near what it was last year.

Simon's trailing 12-month FFO is about $2.5 billion, so the addition of Taubman assets won't move the needle dramatically on Simon's financials. Once the COVID-19 crisis finally fades, the deal may end up looking good. For the moment, it is simply a case of bad luck and timing for Simon Property Group.

One lesson for investors is that if a company you own is being bought for cash, and it doesn't appear that a bidding war is about to happen, it usually makes sense to take the money and run. Sell the position to the merger arbitrage pros who will reap the last nickel. As Taubman shareholders who hung on too long found out, holding out for that last nickel usually isn't worth the risk.