Packaged meat products maker Hormel (NYSE:HRL) has performed steadily in 2020. Its shares have risen by more than 16% year to date, and are up by more than 30% from their early pandemic low point of late February.

A single crisis, though, doesn't define a business, and Hormel's ability to outpace the stock market averages over 3-, 5-, and 10-year periods shows the value this consumer staples stock holds. Yet let's see whether another COVID-19 outbreak could knock it off its stride and what a post-pandemic world might have in store. 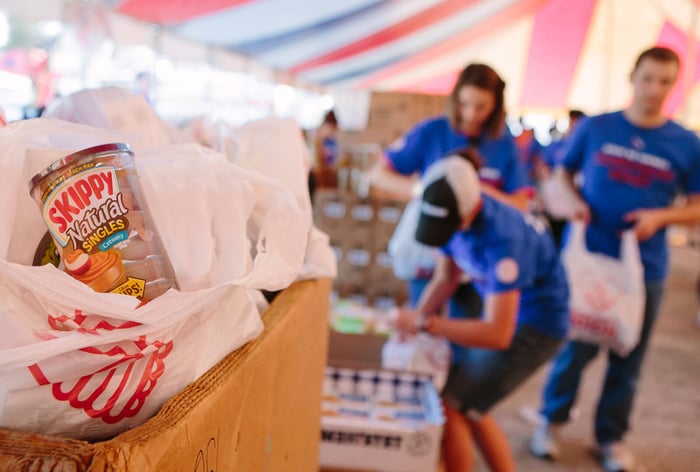 Sales to the foodservice industry typically account for around 30% of Hormel's revenues, but the pandemic obviously hit that segment hard as restaurants and commercial customers closed or reduced operating capacities.

Fortunately, sales through retail outlets account for more than half of the company's revenue, and they nearly offset the declines in the foodservice segment. As a result -- and factoring in Hormel's deli business and sales into international markets -- the company's revenues are up almost 3% year to date.

In particular, the latter two segments were Hormel's standout performers in the third quarter with record sales for the period. Grocery products were its most profitable, with profits surging 36% year over year as robust volumes of Spam canned meats, Skippy peanut butter, and Dinty Moore beef stew drove the gains.

President and CEO Jim Snee credited what he described as Hormel's "intentional balance" for enabling the food business to generate steady cash flows during a period of upheaval.

Yet states and countries are starting to return to lockdown conditions, imposing fresh restrictions on restaurants and other venues. Where Snee had envisioned a continued recovery for the foodservice segment, it could instead be headed for another period of lackluster performance.

Hormel management has also been unafraid to make acquisitions to bolster its growth potential, such as the March purchase of Sadler's Smokehouse. It's also been fearless about selling off businesses that didn't align with its core operations, like last year's sale to PepsiCo of CytoSport, the maker of Muscle Milk, which it purchased in 2014.

And the company has proven ready to jump into new trends. Last year, it announced it was developing a line of plant-based meat alternatives called Happy Little Plants, though its contributions to the top and bottom lines are negligible at the moment.

All of this gives Hormel the appearance of having a solid base to fall back on if this surge in COVID-19 cases leads to a decline in restaurant traffic and another period of panic buying by consumers, or a strong springboard for when the worst of this crisis is behind us. But is the stock a good value?

That's a harder case to make. Hormel's stock trades for 30 times trailing earnings and 28 times next year's estimated earnings, and more than 70 times its free cash flow. Those are considerably more expensive valuations than the market is giving to peers like Campbell Soup, Conagra Brands, General Mills, or Post Holdings.

However, it has outperformed these companies over virtually all recent periods, which suggests that Hormel's stock could be worth the premium valuation it is carrying.

Hormel pays a dividend that it has increased annually for the past 54 years, earning it membership in the rarified group known as the Dividend Kings.

While its dividend at current share prices yields a modest 1.8% annually, when Hormel makes its shareholder payout this month, it will be the 369th quarterly dividend it has distributed since it went public in 1928. That's a degree of consistency not to be ignored.

A tasty bite for your portfolio

While some may be put off by the lofty valuations Hormel trades at, I still like its potential. With a portfolio of brands that are consumer pantry staples, it's clear the business is rock solid. It has over $1.7 billion in cash and short-term investments, and only $1 billion in long-term debt.

While not a value stock or a flashy growth business, Hormel possesses plenty of steady, long-term growth potential. It just what you'd expect from a defensive consumer products investment, and it should play well in a market with unknown crises still to be faced.