Inovio Pharmaceuticals (NASDAQ:INO) investors can breathe a little easier this week after the U.S. Food and Drug Administration lifted a partial clinical hold on the planned phase 2 study of the company's investigational coronavirus vaccine. The biotech can now move forward with that part of the trial. Adding to the good news, Inovio said the U.S. Department of Defense will fund the phase 2 and phase 3 trials. Inovio shares, down 34% since the announcement of the partial hold in late September, jumped nearly 15% in one trading session.

So does this mean Inovio is back as one of the main players in the coronavirus race? Well, it's clear the hold set the company behind from a timeline perspective. But rapidity isn't everything in this race. Let's take a closer look at where Inovio stands right now. 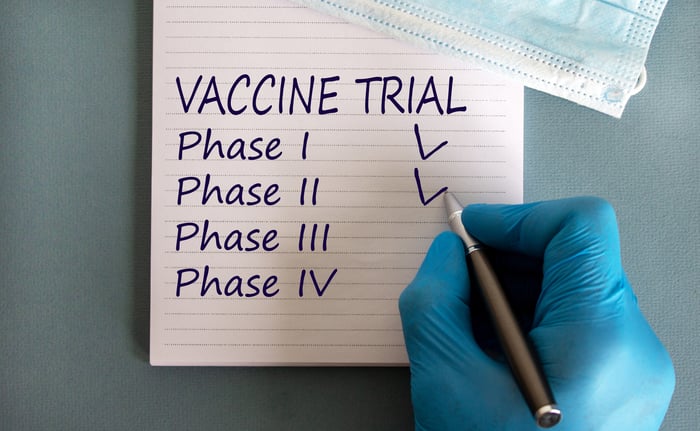 First, a glimpse into the past. Inovio was an early leader in the vaccine race. The company caught the world's attention after saying it had created its investigational vaccine in three hours after receiving the genetic sequence of the coronavirus. Inovio moved into human trials in April, only a month behind leader Moderna (NASDAQ:MRNA).

But since then, the path has not been smooth. Investors were disappointed after Inovio's phase 1 data reports lacked details on neutralizing antibody levels. These are the antibodies known for blocking infection.

Other challenges included a lack of funding from Operation Warp Speed, the government's effort to shepherd the most promising vaccines to market, and lower production capacity than its peers. While rivals promise an annual capacity of 500 million vaccine doses or more, Inovio's capacity is about 100 million doses.

The partial clinical hold compounded Inovio's troubles. The FDA placed the hold on phases 2 and 3 until Inovio answered questions about the trial and the device it uses to deliver the potential vaccine. (Inovio's proprietary Cellectra device opens pores through an electrical pulse, allowing for intradermal product delivery.) One bright spot: The partial hold didn't stem from any adverse events in the vaccine candidate's phase 1 trial. So Inovio was able to continue that study.

Now, as Inovio enters phase 2, there are 11 rival programs involved in phase 3 studies. Moderna may apply for emergency use authorization (EUA) from the FDA as early as this month and Pfizer (NYSE:PFE) announced today that it is going forward with its application. It's clear Inovio isn't winning from a timeline perspective. But that's OK. Considering worldwide need for a vaccine and the production capacity of each vaccine developer, there is room in this market for several players.

Inovio's phase 2 trial will enroll about 400 participants in three age groups: ages 18 through 50, 51 through 64, and 65 and older. Inovio favors enrolling volunteers with a high risk of exposure -- for instance, those living or working in areas with high rates of COVID-19 infection. The two-dose regimen will study safety and immune responses to determine dosage for the planned phase 3 trial.

Inovio is no longer among the leaders in the vaccine race. But its program is moving forward now, and that's positive. It's also encouraging to see the Department of Defense offering financial support beyond the initial $71 million it pledged in June.

Overall, the situation is looking brighter for Inovio today than it was a couple of weeks ago. And eventually, even a small portion of the coronavirus vaccine market could be a big win for this biotech company. An approved vaccine would be the company's first commercialized product.

Still, Inovio's troubles aren't completely over. The FDA hasn't lifted the partial clinical hold on the phase 3 part of the trial. The agency still has unresolved questions regarding the Cellectra device. Inovio says it will address these questions as the phase 2 trial unfolds. This continues to be an uncertainty that may weigh on the shares in the coming weeks. For Inovio to proceed with the final stage of clinical studies, its answers will have to satisfy the FDA.

And unlike its peers, Inovio hasn't offered possible timelines for the completion of phase 2 enrollment or early data readouts. This is another unknown for the biotech company.

The stock is down 52% from its peak back in July. Strong clinical trial results or eventual authorization of the vaccine candidate may bring it back to that level or beyond. But right now, considering the uncertainties mentioned above, that is a high-risk bet.