Sotera Health, Maravai Life Sciences, and Olema Pharmaceuticals (NASDAQ:OLMA) are all filing IPOs as "emerging growth companies" as defined by the 2012 Jumpstart Our Business Startups Act, which gives them extra time to comply with the accounting standards that are expected of public companies. That means you have to dig a little bit deeper to see if these are worthwhile IPOs.

All three are going public to raise money to allow their companies to grow. And all three lost money last year. Sotera, which plans to trade on the Nasdaq with the symbol SHC, said it plans to sell 46.6 million shares between $20 and $23 each, which would bring in a little more than $1 billion.

Maravai, which will trade on the NASDAQ with the ticker MRVI, said it estimates its IPO's price per share will be between $24 and $27, with the company planning to sell 50 million shares, raising roughly $1.3 billion. Olema said it plans to sell 11 million shares with the IPO price at $19 per share, bringing it potentially $190 million. 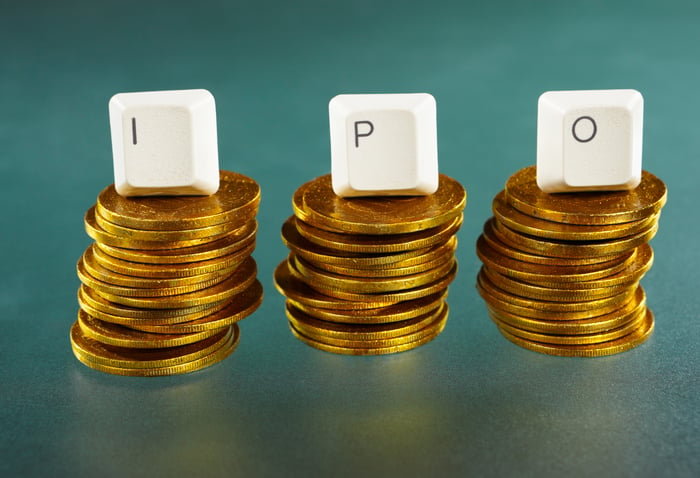 Sotera Health isn't your typical healthcare company doing an IPO. The Broadview Heights, Ohio, lab sterilization services company has been around for a while. It formed in 2017 as the parent of three companies, Nelson Labs, Nordio, and Sterigenics, which combined had been operating for 185 years. It says it has nearly 2,900 employees with 50 sterilization facilities and 13 testing labs across 13 countries.

Sotera says its customers include 40 of the top 50 medical device companies and eight of the top 10 pharmaceutical companies. The company, through its Sterigenics division, provides terminal sterilization (the last step before a product goes to a consumer) to pharmaceutical companies, using the radioisotope Cobalt 60 for gamma sterilization, which uses radiation from the decay of Cobalt-60 to kill microorganisms on a variety of products. It also does microbiological and analytical testing through Nelson Labs.

One downside is that, despite rising revenue, the company has lost money the past two years. It posted a net loss of $20.8 million last year and $5.9 million in 2018. However, through nine months, it reported $5.1 million in net income this year.

Most of its contracts are long-term and it operates in a tightly regulated but growing market that one study said has a CAGR of 7% through 2024.

Just three years after its inception, the San Diego biotech company reported $185.7 million in revenue through the first nine months of this year. Even better, it appears to be turning a corner toward profitability, with a reported $64.3 million in net income for the first nine months of 2020. That's a big deal as the company said it lost $16.9 million in 2018 and $5.2 million in 2019. However, as the company grows, it acknowledges its expenses will grow, so it is raising money to prepare for that growth.

The company already has more than 5,000 customers, including some big names, as it supplies reagents for the COVID-19 vaccine in trials for for Pfizer and BioNTech. Maravai estimated that 64% of its revenue came from products related to vaccines and Pfizer alone accounted for 14% of the company's revenue this year. That number could explode as Pfizer and BioNTech ramp up manufacturing for their COVID-19 vaccine.

Olema Pharmaceuticals is already off to the races

Olema went public with its IPO on Thursday. The IPO price was $19, but the San Francisco biopharmaceutical company hit the market on a very positive day and it showed. The stock opened at $43.65, hit a high of $49.03 (158% over its IPO price), and closed the day at $47.49. Is the clinical-stage drug company worth that kind of response? 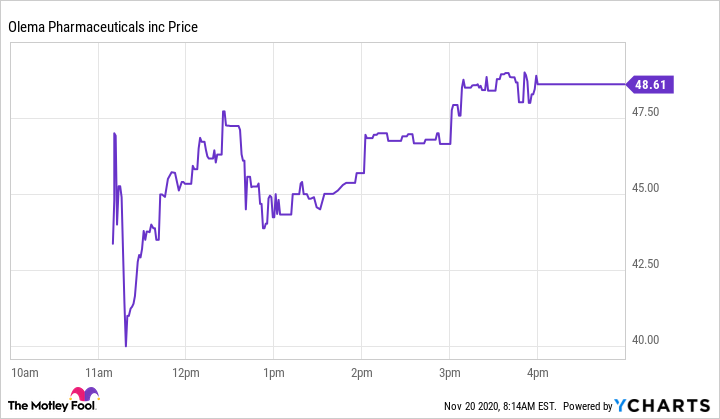 Looking at the negatives first, Olema has no revenue and no marketable drug, though it does have a lead candidate, breast cancer drug OP-1250, in phase 1/2 trials. The company has been around since 2006, initially as CombiThera, before changing its name to Olema Pharmaceuticals in 2009. In the four years it has been in business, it hasn't turned a profit. It lost $4.3 million last year and has already has lost $12 million in net income through nine months of this year.

Olema focuses on therapies to treat breast cancer, which is the second-leading type of cancer behind skin cancer for women. It affects nearly one in eight women in their lifetime, according to breastcancer.org.

The company also has a big-pocketed collaborator in Novartis, regarding OP-1250.

Picking a winner from the bunch

Olema probably has the most upside of the group and also the most risk. Basically, everything is riding on the success of its lead drug. It's already made people some money in one day of trading, but again, like any clinical-stage pharmaceutical company, it's boom or bust. On top of that, the company said it is likely years away from having a marketable product.

Maravai Life Sciences and Sotera are safer bets. They don't deal directly with consumers but with pharmaceutical companies, and they're already well known in the industry. Instead of spending their money on sales representatives or advertising, they can plow money into research and development with the money they get from their IPOs. I think Maravai has the best chances in the short run because the reagents it produces are needed for various vaccines -- not just Pfizer's and BioNTech's coronavirus vaccine. Plus, the company is just beginning to make a profit.

In the long run, however, I like Sotera the best. There may be less growth potential there because the company has already been around for a while and is already producing solid revenue. But I think its core business of sterilization is one that will continue to grow well after the COVID-19 pandemic is over.