Nike (NYSE:NKE) has been one of the biggest surprise success stories of the coronavirus pandemic.

While nearly the entire apparel retail sector has been hammered by the crisis, Nike, after an initial setback, has thrived. The stock is up 30% year to date, and looks like the rare stock that has found a way to succeed in both a COVID-19 and post-COVID-19 environment.

Nike hasn't escaped the pandemic unscathed. Revenue slipped 1% in its most recent quarter and plunged by 38% in the quarter before that. But what has impressed the market is the company's ability to expand its margins and deliver strong growth in its digital channel. Its performance has convinced investors that Nike is gaining market share during the pandemic and will emerge from the crisis in a stronger position than its competitors. Those factors, especially its strength in the digital channel, also bode well for the company's competitive position five years from now. 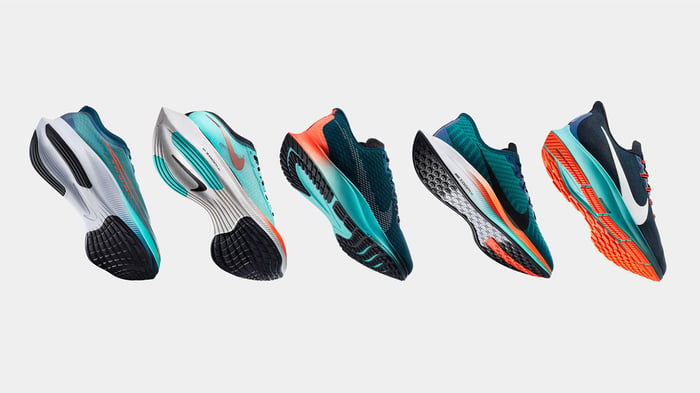 Nike first announced its current strategy, dubbed the Consumer Direct Offense, back in 2017 when it announced a restructuring that included doubling innovation, speed, and connections with customers, as well as deeply serving customers in 12 of the world's biggest cities, including New York, Los Angeles, Beijing, Shanghai, Paris, and Mexico City. As part of the strategy, Nike also said it would prioritize 40 key retail partners, like Nordstrom and Foot Locker, that could provide unique experiences and elevate the brand with stand-alone Nike spaces inside stores.

Investing in digital has also been central to the strategy as Nike has grown its online fitness clubs to millions of members and its SNKRS app has delivered strong growth with a pull marketing strategy that keeps sneakerheads on the lookout for the latest releases.

Digital and Nike Direct sales, which include its own branded stores, have driven much of the company's growth in recent years, and the sportswear giant only seems poised to accelerate on that track over the next five years. Last year, it tapped a CEO from the tech industry, John Donahoe, who had previously led ServiceNow and eBay, showing the company's focus on digital. It also acquired demand forecasting technology company Celect, to help it better recognize trends and adjust inventory effectively to deploy it where it's needed.

Nike had originally set a goal in 2015 of reaching $50 billion in annual revenue by this year. It was forced to delay that until 2022 due to earlier stumbles when it lost ground to adidas, but the company is on track to achieve that goal even with setbacks from the pandemic. Doing so would mean growing its revenue at a compound annual rate of about 9% from its fiscal 2019 revenue of $39.1 billion.

Like the rest of the apparel sector, the company looks poised to capitalize on pent-up demand when the pandemic ends. Stores will be reopened, the Summer Olympics should go on following a delay this year, and there's sure to be a wave of spending on streetwear like Nike's classic sneakers. Building on the momentum in digital and the rebound after the pandemic, Nike should be able to reach more than $60 billion in revenue by 2025, three years after it eclipses its $50 billion goal in 2022.

Meanwhile, the company's margins should continue to improve as an increasing share of its sales goes to digital and direct, where it has more control over the sales process and doesn't have to share revenue with its retail partners. The Consumer Direct Offense has helped Nike extend its lead over rivals like adidas and Under Armour, and that trend should continue over the coming years. In addition to its increasing emphasis on technology and direct sales through its own stores, investors should expect continuing innovation like its Vaporfly shoes, a version of which was banned after Eliud Kipchoge ran the world's first sub-two-hour marathon. Investors should also expect Nike to maintain a world-class roster of sponsor athletes.

The future looks bright for Nike. With profit margins expanding, a tailwind coming from the end of the pandemic, and a clear leadership position in its industry, the stock should continue to be a winner over the next five years.