Not all as well in Niketown.

For the first time in a decade, a Nike (NYSE:NKE) shoe did not claim the top spot in US sneaker sales, ceding the lead to the Adidas (OTC:ADDYY) Superstar last year.

Shares of the Swoosh are now down more than 20% from its all-time high at the end of 2015, while rival Adidas is ascendant, and the broad market is at an all-time high -- and even Wall Street is turning sour on the sneaker king, as it has more than one sell rating for the first time since 1997. 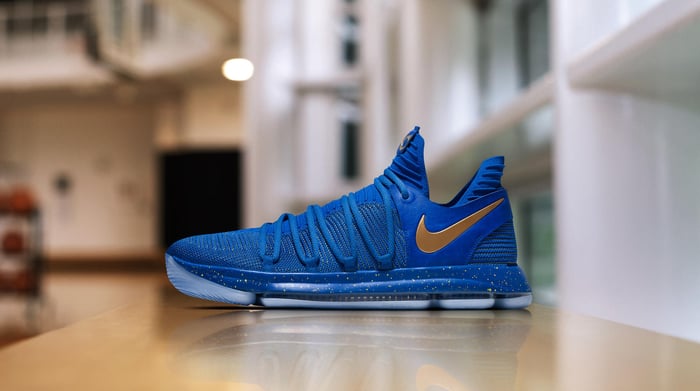 So perhaps it wasn't surprising that the world's largest sports brand said last week that it would make significant layoffs for the first time since the recession and restructure the company in many ways.

Nike unveiled a new company alignment it's calling the "consumer direct offense". The plan includes shifts in distribution, production, and marketing, in addition to laying off approximately 2% of its global workforce, or about 1,400 employees.

First, Nike will focus its growth efforts on 12 major cities in 10 key countries, including New York, Los Angeles, Mexico City, London, Paris, Berlin, Milan, Barcelona, Shanghai, Beijing, Tokyo, and Seoul. Those cities are global meccas of tourism and fashion, and the company likely plans to open more experiential stores such as the one it unveiled last year in New York's SoHo neighborhood, which offers unique opportunities for customers to interact with the brand, reinforce the brand's legacy through unique displays and interactive experiences, and build customer loyalty. The stores have shown to be overwhelmingly popular. Focusing on tourist-heavy cities will ensure high traffic for such stores and build buzz for the brand as visitors bring their experiences home and share them.

Nike says it expects the ten countries represented above to contribute 80% of its growth through 2020. It's also streamlining its geographical structure from six regions to four.

The other key component of Nike's realignment is its "Triple-Double" plan, which includes doubling innovation, speed, and direct connections with consumers. The sportswear company said it would accelerate the cadence of new platforms, such as ZoomX, Air VaporMax, and Nike React, and it would cut styles by 25% to focus its product selection and go deeper with the most popular models. It also said it would cut product creation time by half, imitating a move by Adidas and other fast fashion purveyors, and it will place greater resources in the categories with the most potential growth, such as running, basketball, and sportswear. Finally, the company said it would do more to unite the physical and digital retail channels, launching the new Nike Direct organization.

Why the reckoning had to come

There are signs that Nike is losing its hold on industry leadership, beyond Adidas beating it for the most popular sneaker. Revenue growth slipped to just 5% in its most recent quarter, and it has hovered in the mid-single digits over the last two years, well below historical averages around 10%.

Meanwhile, Adidas reported that revenue jumped 31% in North America in its most recent quarter, and overall revenue increased 16%. Other reports show that Nike's Jordan shoes are losing their popularity on the key secondary market as retro Adidas styles like the Stan Smith now represent nearly half of resales.

But the biggest factor influencing Nike's realignment may be its bold revenue goal for fiscal 2020. At its shareholder's meeting in 2015, the sneaker brand outlined a goal of $50 billion in revenue by 2020, along with mid-teens earnings-per-share growth, and expanding returns on invested capital.

In the nearly two years since then, Nike's growth has fallen short, and unless it accelerates, the company will not hit its target. When it reports fiscal 2017 results next week, analysts expect revenue of $34.3 billion, short of a prior goal to hit $36 billion in 2017, and representing just 5.9% revenue growth for the year. In order to get to $50 billion by 2020, revenue will need to grow by more than 13%, a difficult task. A stronger dollar has weighed on revenue growth recently, but that is of little reassurance for investors.

It's much too early to assess the impact of Nike's realignment, but the layoffs should boost profits, and many of the decisions seem inspired by Adidas' successes, which should help it better compete with its upstart rival. With revenue growth flattening, something had to be done.

Expect to learn more when Nike reports earnings next week as investors will be counting on this strategy to recharge growth to hit that 2020 goal.