The leading name in sports apparel is launching a chain of concept stores that prioritize the customer experience over merchandise sales. Other retailers should take the hint.

With the rise of e-commerce, consumers no longer have to visit a store to buy what they want. A couple clicks on their phone or computer brings most purchases straight to their front door.

That means the purpose of physical stores must evolve -- just offering merchandise is no longer enough. Brands need to use their retail spaces to establish lasting relationships with customers and to create unique experiences that will bring them back.

Nike's (NKE 1.47%) new concept store in the Soho neighborhood of New York shows it understands this transition. In a five-story space opened in November, the company has created a retail format that is part store, part brand museum. One display features 20 female mannequins clothed in different Nike ensembles, recreating 20 individual athletes. Vintage sneakers such as the 1986 Nike Dunk High are displayed in glass boxes, offering an abridged history of the company's footwear, and an interactive feature allows shoppers to engage with a timeline of the company and its sneakers. Of course, the store offers merchandise, too, with each floor devoted to departments like running, menswear, womenswear, and basketball. The basketball floor even includes a built-in half court where customers can try out new sneakers before they buy. The store also gives customers the opportunity to customize merchandise like Air Jordans in colors of their choice.

Nike's Soho store is a template that the company is rolling out in tourist locales around the world with recent additions in Miami, Moscow, and Beijing. Rather than attempting to drive profits the way traditional retail businesses function, these stores' primary role is as a marketing vehicle. Placed in high-traffic areas in major cities that draw visitors from far and wide, the objective is to bring in shoppers and generate excitement for the brand. An in-store purchase isn't necessary for success as the bigger idea is to establish a lasting relationship with customers who can later buy Nike products online or at retail partners like Foot Locker. 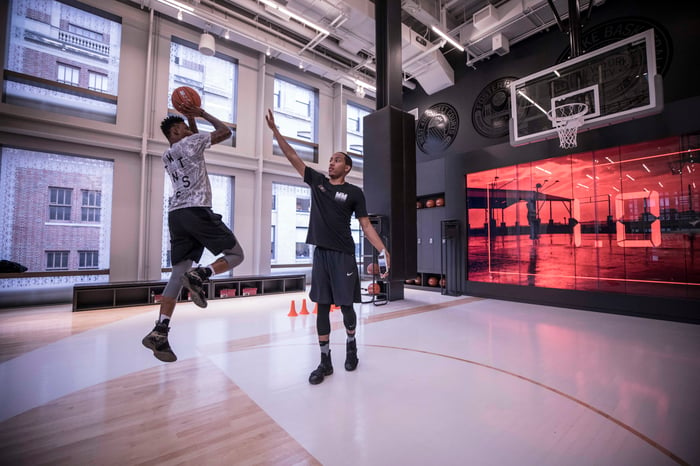 Nike's rivals are moving in a similar direction. At a store in midtown Manhattan that opened in December, Adidas offers a mini soccer field where customers can test new cleats as well as a treadmill called the "Run Genie" which analyses runners' gaits for the optimal sneaker recommendation.

Under Armour's handful of Brand Houses around the country include features like a wearables bar and an OptoJump interactive feature that measures the height a person jumps.

What other retailers can learn

Traditional retailers have announced hundreds of store closings in recent months after a punishing holiday season. Ralph Lauren was the latest to join the ranks last week, saying it would close dozens of locations, including its flagship store on Fifth Avenue in New York. That strip of real estate is among the most exclusive in the world with rents approaching $3,000 per sq. ft.

Admittedly, it's easier for activewear brands like Nike to engage customers with a unique in-store experience. But that doesn't mean brands like Ralph Lauren have no opportunity to tell customers their own story. Offering the same polo shirts year after year isn't going to impress shoppers, but a personalized service like tailoring or monogramming might.

This trend explains in part why department stores are struggling so much lately. A company like Macy's sells other companies' products, meaning its brand is limited to the chain of stores alone. At a time when branded merchandise is available through so many channels, bringing customers in to sample even the hottest products is more difficult. The same idea applies to Payless ShoeSource, which declared bankruptcy last week.

As a result, some department stores are turning to the store-within-a-store model. J.C. Penney, for example, has found success by adding Sephora locations and expanding its product selection.

The way of the future

On the recent Nike earnings call, CEO Mark Parker touted the success of the Soho launch, saying, among other things, that personal shopping appointments at the store led to three times the average transaction size.

No matter how fast e-commerce delivery gets, or how many video streaming options there are, consumers are still looking for a good reason to walk out the front door. Retailers that understand this, and follow through by offering compelling shopping experiences, are the ones that will thrive in the future.