Retail stocks got another shot in the arm today as AstraZeneca, in tandem with Oxford University, became the third pharmaceutical company in as many weeks to announce positive phase 3 coronavirus vaccine results, saying that its vaccine regimen had an efficacy rate of as high as 90%, or 70% on average.

The news added to hopes that vaccines would soon be available and in wide enough distribution to bring an end to the COVID-19 pandemic, which is bullish for a range of "recovery stocks," including most retailers.

At the same time, the small-cap Russell 2000, which is more sensitive to the macroeconomic environment, finished up 1.9%, and the SPDR S&P Retail ETF gained 3.7%. A number of these stocks report earnings soon, and investors are getting more bullish as they seem poised to survive the crisis intact. 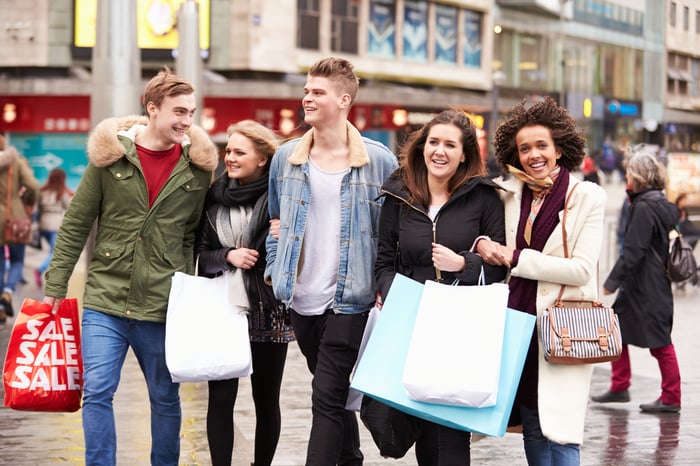 Though AstraZeneca's coronavirus vaccine didn't have an overall efficacy rate as high as either Pfizer's or Moderna's, it also doesn't have the same storage requirements as the other two and is cheaper to manufacture because it's made using more traditional methods.

All the retail stocks in the group above except for GameStop focus on footwear and apparel, the retail segment that has been hit the hardest during the pandemic. As nonessential retailers, many of these companies were closed during the lockdown period, and customers are still reluctant to visit brick-and-mortar stores.

Riding a bullish trend in luxury retail, Nordstrom has been on a tear lately as the stock has nearly doubled in just a few weeks. The high-end department store chain will report third-quarter earnings tomorrow after hours. Analysts anticipate a 15.6% decline in revenue to $3.1 billion, and on the bottom line, they see a loss of $0.06 per share after an $0.81 per-share profit in the quarter a year ago.

Kohl's has been on an upswing dating back to last month, as the market was encouraged by the company's plans to launch its own athleisure brand, capitalizing on one of the few positive apparel trends during the pandemic. It also turned in better-than-expected results in its own earnings report last week, although it still experienced a substantial 14% decline in revenue.

The Children's Place has been improving since the company delivered a strong third-quarter earnings report last week, posting a per-share profit of $1.44. The apparel retailer said it would accelerate its store-closing plans as the transition to e-commerce has been hastened by the pandemic. The company normally makes the vast majority of its profits in the second half of the year, so it may be in better shape than its peers since the worst of the crisis was during its seasonally weak time of year.

DSW parent Designer Brands has also been surging in recent weeks on positive vaccine news. The company, known for its cavernous shoe stores, has not handled the pandemic well as it is highly dependent on in-store traffic, but it will get a shot at redemption when it reports earnings next month.

American Eagle has been one of the brighter stars in retail in recent years thanks to its Aerie intimates sub-brand, which has captured millennials and Gen Z and taken gobs of market share from the struggling Victoria's Secret. Thanks in part to strength in Aerie, American Eagle shares are actually up this year, showing the company has handled the pandemic well.

Finally, GameStop has been one of the biggest surprises in retail recently as the stock has more than doubled this year, reversing its status as a longtime laggard. The gains are primarily a result of RC Ventures, which is led by former Chewy CEO Ryan Cohen, taking a large stake in the video game retailer. Cohen called for a "tech-centric" makeover of the company, focusing on areas like e-commerce, e-sports, and mobile gaming.

Outside of American Eagle and GameStop, the remaining four stocks are still all down substantially year to date, meaning there is room for a continued recovery, especially if they can return to profitability.

The holiday season is right around the corner, with Black Friday later this week, and retail investors will be watching the early results eagerly. This is a unique year, and the overall retail sector has rebounded surprisingly strongly from the early days of the crisis. But the holidays are still a mystery, especially with the nationwide spike in coronavirus cases. No one knows if holiday sales will match historical norms, but with positive vaccine news set to keep trickling in, a strong holiday season could help these struggling stocks recoup most of their losses this year.